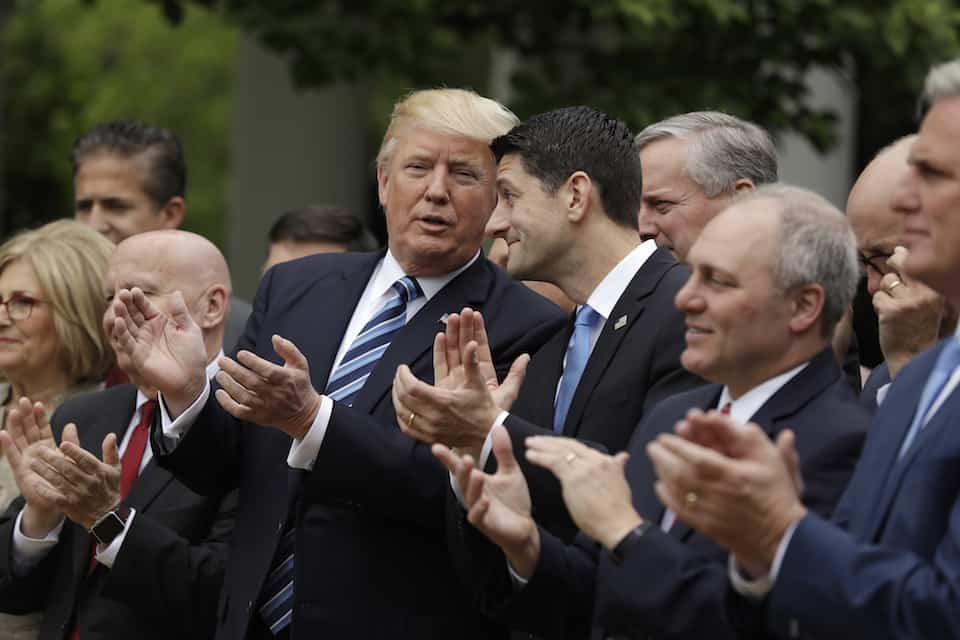 Donald Trump is successfully sabotaging the health care market in Iowa, threatening to leave tens of thousands uninsured. Now the state is seeking federal aid to help stabilize their market.

With their health insurance market on fire, Iowa is forced to turn to the man holding an empty gas can and a smoldering match: Donald Trump.

Insurers are pulling out of huge sections of the state, which would leave more than 70,000 Iowans uninsured. This instability is not an accident — it is a direct, foreseeable result of Trump’s repeated threats to halt payment on the subsidies upon which insurance companies rely. These threats caused insurers to abandon "almost all of Iowa’s 99 counties."

According to Bloomberg, "many health insurers are quitting the state-based markets created by the ACA amid uncertainty over the law’s future, leaving consumers in some states with limited options — or in some cases, no options at all."

In a meager attempt to mitigate the damage caused by Trump, Iowa has cobbled together an emergency plan to reallocate federal funding to help cover those Iowans who otherwise would have no access to any health insurance in 2018.

Unfortunately, the plan mirrors the bill recently passed by House Republicans. The results are predictable:

Under Iowa’s plan, a 40-year-old making about $42,000 a year would pay an estimated $384 a month out of pocket next year to buy coverage, compared to $291 under Obamacare. In general, younger and wealthier people would fare better under the Iowa proposal, while older and poorer people would face higher costs.

Helping the rich at the expense of the poor is the Trumpian way, and that philosophy is trickling down to state and local levels of government.

And unsurprisingly, Republicans in Congress are making a bad situation worse.

In their plea for help, the Iowa Insurance Division notes that Republican "indecisiveness" at the federal level has "further debilitated the Iowa individual health insurance market."

This same scenario is playing out across the nation. As insurers dramatically raise premiums and abandon large swaths of the country, Republicans are desperately trying cast blame at anyone other than their own self-proclaimed "party of personal responsibility."

The Center on Budget and Policy Priorities took note of the Republican sabotage, saying, "By refusing to include a measure guaranteeing the continued payment of the Affordable Care Act’s (ACA) cost-sharing reductions (CSRs) in the new fiscal year 2017 spending bill, the Administration and congressional Republican leaders have endangered health coverage for millions of Americans."

The Center determined that Republicans "will bear responsibility for the premium increases, marketplace disruption, and coverage losses that will likely result."

But while thousands across the country are suffering, Republicans are not yet satiated. The Trump-Ryan plan to replace Obamacare rips health care away from 23 million people. The Senate will soon follow their lead.

Unfortunately, no one knows exactly what they are planning, because Senate Republicans are plotting behind closed doors with no input from Democrats. Or the public. Or women. And to cap off the lack of transparency, there are no plans to make it public.

While they dawdle and scheme in secret, Republican malevolence is causing suffering across the country.

All the Trump-led Republican Party can do it grab a fiddle and play a merry tune, hoping to distract from the fact that insurance markets are burning to the ground.

This is, pure and simple, a sabotage.