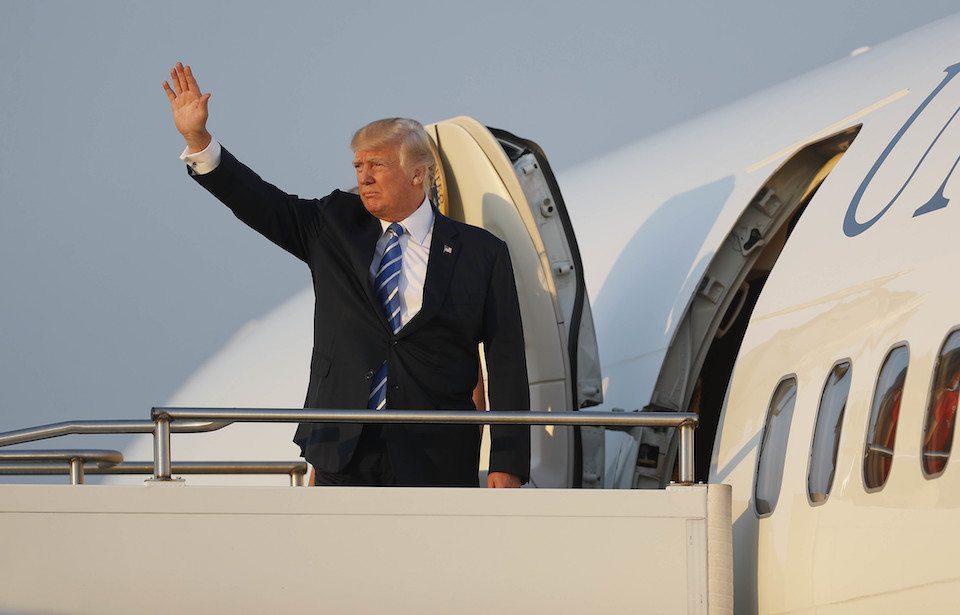 Everyone knows Donald Trump hates being at the White House.

He called it a "dump," according to a report earlier this month. And he has spent most of his weekends — 75 days so far, out of his 213 days in office — at one of his many Trump-branded properties, where his appearances are intended to lure customers who will pay for the chance to have him crash their wedding.

And Trump's insistence on taxpayer-funded travel to advertise for his properties is bankrupting the Secret Service responsible for protecting him and his family.

USA Today reports that Trump family travels have already consumed the entire year's budget for protecting the first family, with more than 1,000 federal agents already reaching their "federally mandated caps for salary and overtime" that were supposed to last the entire year.

The agency's director, Randolph Alles, says the shortfall is so serious that he "has begun discussions with key lawmakers to raise the combined salary and overtime cap for agents, from $160,000 per year to $187,000 for at least the duration of Trump's first term."

But, he adds, even if such a deal were approved, 130 agents would still not be fully compensated for the time they have already served protecting Trump and his family.

"I don't see this changing in the near term,'' Alles said.

Each of Trump's trips to Mar-a-Lago costs approximately $3 million, and the Secret Service has been forced to spend $60,000 on golf cart rentals to protect Trump at his gold clubs in Florida and New Jersey, according to USA Today. That's money that goes right into Trump's bank account.

For a man who incessantly mocked President Barack Obama for taking vacations — and especially for his far rarer golf outings — the fact that the Trumps are already costing taxpayers an unprecedented sum is, at best, ironic.

That almost every single one of these trips serves the dual purpose of promoting Trump's businesses — where his entourage, guests, and protection are forced to pay money to Trump owned businesses for the "privilege" of staying there to protect the president of the United states — is downright obscene.

But given that Trump and his sons have been unapologetically open about their intention to milk the Oval Office for all its worth, encouraging foreign entities to stay at Trump's D.C. hotel to curry favor with him and advertising the chance to meet the president by holding events at his private clubs, it isn't surprising.

It is just further evidence of the corruption of this president and his family and the complete lack of respect for the office he holds.