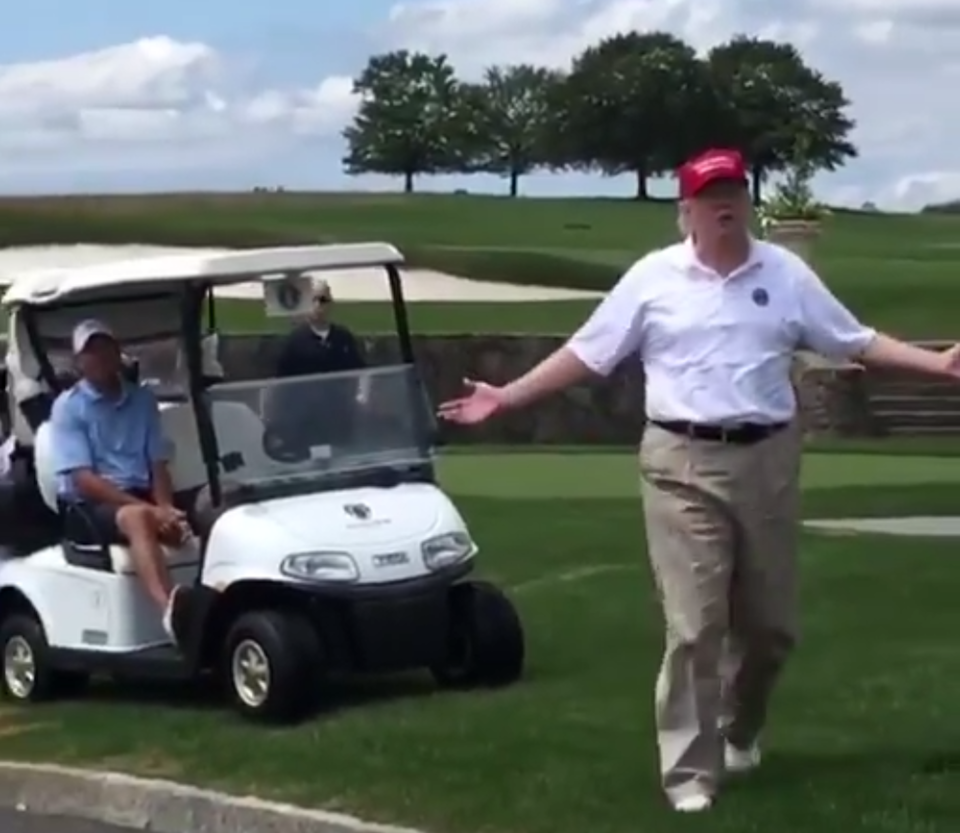 Twitter/Sports Illustrated
Get The American Independent in your inbox

Donald Trump tried to ban the media from covering his golf outings as he relaxes during his taxpayer-funded vacation, but pictures and video of him goofing off have already surfaced.

Donald Trump has banned the media from covering him as he takes a break from his failing presidency to indulge in multiple rounds of golf for the month of August.

While Trump aides have described his escape to this New Jersey golf club as a "working vacation" — and Trump claimed, during a Monday morning Twitter tantrum, that he is "working hard from New Jersey" — the luxury getaway at taxpayer expense has already been exposed.

White House aide and Nazi sympathizer Seb Gorka said in July that Trump was justified in taking off the month of August because he's been "crushing it" as president.

Trump did not allow the traveling White House press pool to go with him to the Trump National Golf Club over the weekend. Instead, as they reported, they were stuck "in a windowless conference room at the Marriott in Bridgewater, N.J.," 12 miles away from Trump's club. White House officials did not tell the press what Trump would be up to that day.

If they had been permitted to travel with Trump, they would have caught him crashing a wedding over the weekend as he hit the links dressed up "wearing typical golf clothes mixed in with a red Make America Great Again hat."

Sports Illustrated posted an Instagram video of Trump in full golf regalia, inquiring if wedding guests were having a good time. These are images that would not have been seen if not for amateur videographers toting their iPhones.

While Trump tweeted that the planned 17-day getaway was "not a vacation" and that he was taking "meetings and calls," his attempted media blackout isn't working because it is 2017 and it's virtually impossible for someone as infamous as Trump to completely hide.

Unlike Trump, President Barack Obama's first August in the White House was filled with official duties and actions, as he worked to improve the economy and pass his health care legislation, which brought insurance to millions. Trump's health care plan failed to pass.

Trump has tried to hide his golf escapades several times before, perhaps aware that his apparent addiction to the game makes his tweets complaining about Obama's golfing, which happened far less often, sound ridiculous.

Banning the press to hide his behavior hasn't worked, but it speaks volumes about Trump's authoritarian mindset that he ever thought it would.