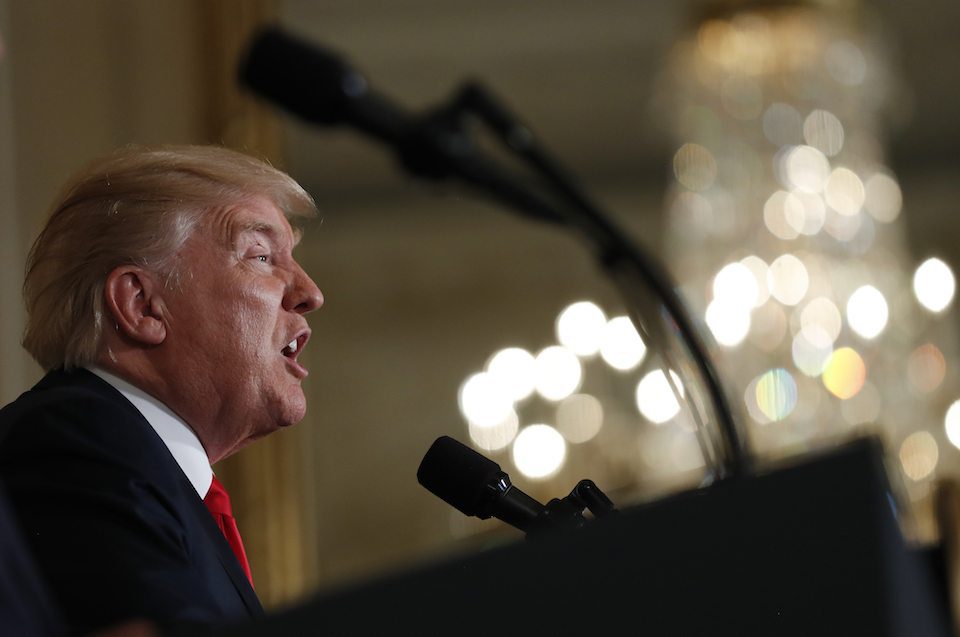 Donald Trump answered Mexico's offers of assistance in the wake of Hurricane Harvey by spewing insults at them on live television. Classy.

Donald Trump's obsession with building a wall along the southern border ruined an opportunity for a moment of unity with our neighbors to the south.

Despite Trump's repeatedly racist rhetoric and increasingly ridiculous insistence that Mexico will pay for his border wall, Mexico is ready to put politics aside and help Americans impacted by Hurricane Harvey, as the storm continues to wreak devastation across Texas.

Mexico's foreign minister reached out to Texas Gov. Greg Abbott to discuss how they could help with the relief and recovery efforts — just as they did after Hurricane Katrina, providing meals, distributing supplies, and conducting medical consultations.

In a moment that could have seen international camaraderie, Trump instead chose to continue his trend of sowing conflict and animosity.

At a press conference with the President of Finland, Trump gave extended remarks about the situation in Texas. Not one time did he bother to thank Mexico (or Canada, for that matter) for their offers of assistance.

Later in the press conference, when the topic of Mexico and the border wall came up, Trump had yet another opportunity to put aside his discordant and hateful rhetoric.

And once again, he failed miserably.

When asked about his plans to shut down the U.S. government if Congress refuses to pay for the wall that Trump himself promised Mexico would pay for, Trump went on an unhinged tirade, casting Mexico as a criminal-infested drug haven.

Trump claimed that a border wall was necessary because of Mexico's "tremendous crime problem," further insisting that "tremendous drugs" are pouring into the United States from Mexico.

Trump also rambled on about the North American Free Trade Agreement (NAFTA), complaining that Mexico is "being difficult" about renegotiating the agreement because it was a "sweetheart deal" for them.

And of course, he repeatedly reiterated that Mexico would pay for the wall, even if had to be through "reimbursement" — a nice big word to stand in for "American taxpayers will fund the wall because Mexico is never going to do it, no matter how loudly I yell."

REPORTER: Is your plan still to have Mexico pay for the wall?

We’re right now negotiating NAFTA. In my opinion, Mexico has been very difficult — as they should be, why wouldn’t they be? They had a sweetheart deal for so many years. It’s one of the great deals of all time for them, but it’s one of the worst deals ever signed. I guarantee you, Mr. President, Finland would never have signed NAFTA with Russia or whoever you wanted. This is not a deal that you would want to sign. This is not a deal that Finland would know about. NAFTA is one of the worst trade deals ever signed at anytime, anywhere in the world. And I can understand why Mexico is being difficult, because why wouldn’t they be? They’ve had it their way.

But no, Mexico will pay for the wall. It may be through reimbursement. We need the wall very badly. As you know, Mexico has a tremendous crime problem, tremendous. One of the — number two or three in the world. And that’s another reason we need it. And the — just to add on, tremendous drugs are pouring into the United States at levels that nobody has ever seen before. This happened over the last three to four years, in particular. The wall will stop much of the drugs from pouring into this country and poisoning our youth. So we need the wall. It’s imperative. We may fund it through the United States, but ultimately, Mexico will pay for the wall.

In addition to unending criticisms of the country that is offering to help in our country's time of need, Trump can't even get his facts straight. He claims that "the wall will stop much of the drugs from pouring into this country."

But even our own Drug Enforcement Administration says that most drugs come via "vehicles or tractor trailers by using legal ports of entry."

Through the entire tirade, Trump could not find the time to thank Mexico — not even once, not even for a moment — as they offered their support to our country in a time of dire need.

As of yet, the United States hasn't even decided whether or not to accept assistance from Mexico.

Once again, Trump let his personal prejudices get in the way of what could have been a productive moment of bilateral diplomacy — and Americans trying to survive a devastating natural disaster may end up paying the price for Trump's callously dismissive attitude.