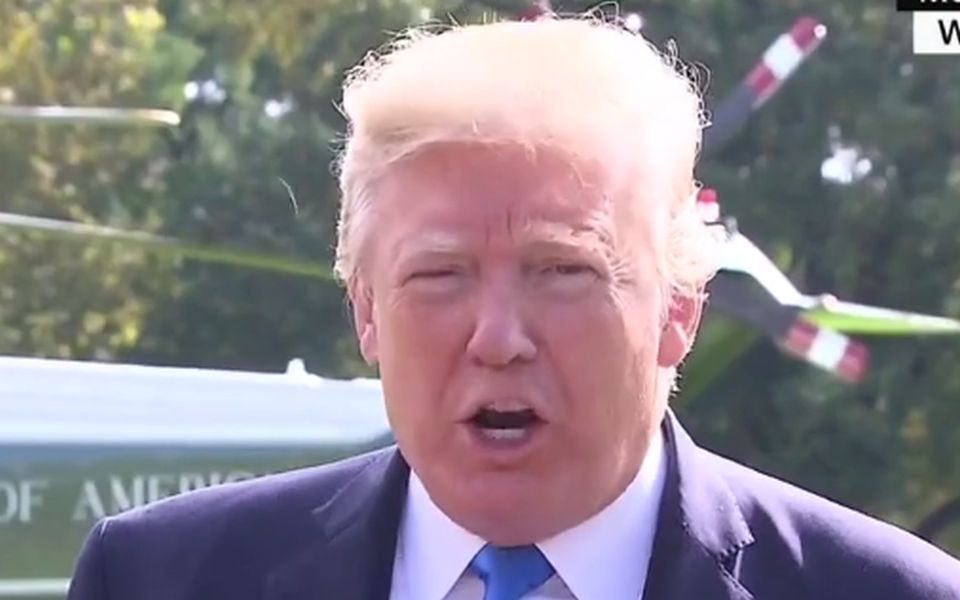 Donald Trump continued to dodge any responsibility for the murder of four soldiers in Niger, now blaming the generals in the field for the deaths. But they are all acting on his orders, and veterans are crying foul.

Donald Trump said that "his" generals are to blame for the four American soldiers who were killed in Niger, operating under his orders.

Trump's cowardice ignores his role as commander in chief of the U.S. military and attempts to pass the buck for the results of his leadership.

In an impromptu question and answer session on the White House lawn, where he bragged that he is "a very intelligent person," Trump sidestepped responsibility for his leadership.

Asked by reporters if he authorized the deadly mission, Trump said, "No, I didn't. Not specifically. But I have generals that are great generals, adding, "I give them authority to do what's right so that we win."

He also said, "My generals and my military – they have decision-making ability." This is a reference to Trump's dangerous policy, enacted early in his, term to cede real-time decision making ability to generals, which he has used to evade responsibility for deaths.

What happens is you decimate them, and that's all we've done. We have decimated ISIS in the Middle East. They go to Africa, they go to places. When they get there, we meet them there. That's what goes on. It's a tough business, it's a tough war. But we are winning it and you know what? We are going to continue winning it. With that being said, my generals and my military — they have decision-making abilities. As far as the incident that we're talking about, I've been seeing it just like you've been seeing it. I've been getting reports. They have to meet the enemy, and they meet 'em tough. And that's what happened.

He added, "A commander in chief would have taken responsibility for the failed Yemen raid, but Trump pawned that off, too. It shouldn’t be surprising that a guy who weaseled out of military service in the first place, by claiming ‘bone spurs,’ now weasels out of taking responsibility for his military failures."

Shawn VanDiver, U.S. Navy veteran and member of the Truman National Security Project's Defense Council, told Shareblue Media, "When it comes to the military, the buck stops with the commander-in-chief; unfortunately, President Trump has demonstrated time and again that he is fundamentally unable to apologize, admit mistakes, or own up to pretty much anything."

Trump's weasel words don't change reality. As the Department of Defense notes, "The President, as commander-in-chief of the armed forces, is the ultimate authority."

The buck stops with him, period.

The military warned ahead of time that there was inadequate support for missions in Niger. They did not have the assets available in the theater to deal with the ambush faced by the Niger 4. They were sent into harm's way by their leader, who is now trying to shirk his duty.

The evasive blame-shifting has been a hallmark of Trump's time in office. Just about a month after being sworn in, he green-lit a deadly raid in Yemen that led to the death of U.S. Navy SEAL William "Ryan" Owens.

After questions were raised about the mess, Trump desperately claimed that the mission "was started before I got here" and blamed the military for the tragic outcome: "And they lost Ryan."

Trump also again went on the attack against Myeshia Johnson, widow of Army Sgt. La David Johnson, one of the four men killed in Niger. Trump denied her account of what happened during his phone call to her, insisting that he remembered her husband's name and that he showed "respect."

She said Trump's call "made me cry," and told ABC that his statement that her husband "knew what he signed up for," along with his failure to use Johnson's name, was extremely upsetting.

Trump's version of the call sounded as if it came from an alternate reality.

Trump and his underlings, including chief of staff John Kelly, have been engaged in a smear campaign, lying about Rep. Frederica Wilson (D-FL), the family friend who first exposed Trump's callous behavior.

Trump's incessant whining, lying, and tantrums about the call have drawn more attention to his administration's attempts to whitewash the deaths, and now his attempt to sidestep blame highlights that America is not being told the truth about what happened.

The country will learn, and Trump cannot hide.