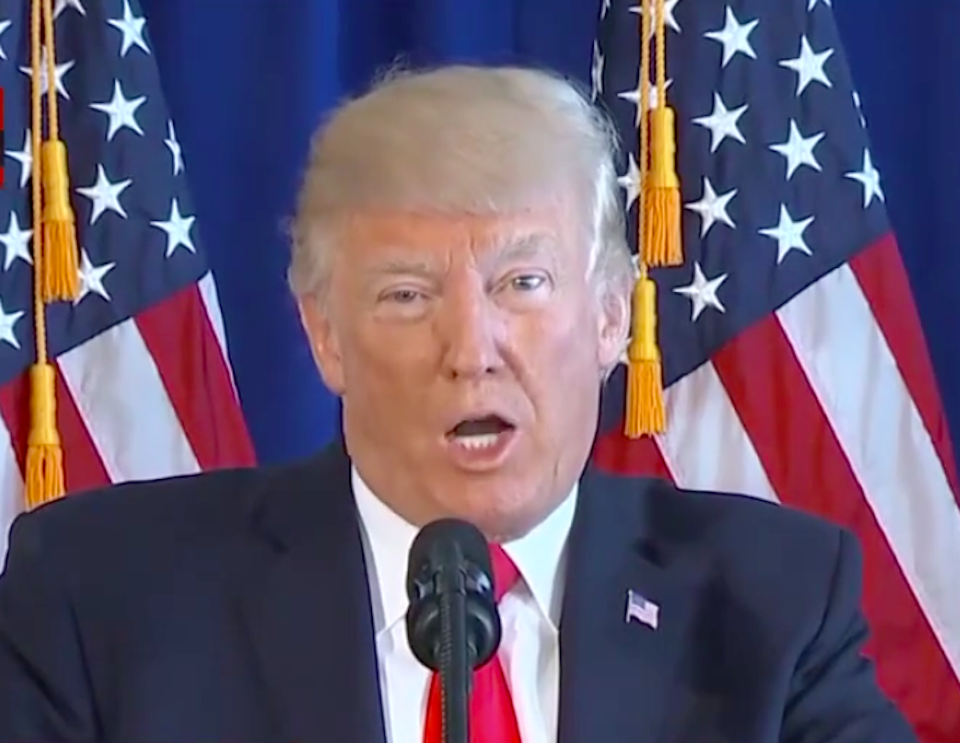 Even during a statement on the hate-driven violence in Virginia, Donald Trump still couldn't resist shirking any responsibility, blaming "both sides," or touting his supposed economic achievements.

It took him a while, but after a couple of formulaic, tepid tweets about the violent white supremacist rally in Charlottesville, Virginia, which continued to roil throughout Saturday morning and afternoon, Donald Trump finally stood at a podium to speak out against hatred.

Oh, and also to brag about the unemployment rate and trade deals.

Before a planned speech on veterans affairs, from his golf-filled vacation in New Jersey, Trump noted that the administration was "closely following the terrible events" in Charlottesville — though not too closely, since he spoke shortly after it was announced that at least one person had been killed when a car plowed into the protestors, and yet he didn't make any mention of that tragedy.

And he immediately made sure to note that the "hatred, bigotry, and violence" was coming from "many sides" — as though torch-wielding neo-Nazis and the people who oppose them are somehow equal in scope and significance.

And just as he has so often refused any responsibility for hatred espoused in his name, he made sure to note, looking into the camera, that this kind of violence has been "going on for a long time in country," adding, "Not Donald Trump, not Barack Obama."

He called for "law and order" while also claiming to "so strongly" want "true affection" among all Americans.

And then he started rambling and bragging about the unemployment rate, about companies coming back to the U.S., and "many incredible things" that he apparently thinks should be enough to end racism.

We condemn in the strongest possible terms this egregious display of hatred, bigotry, and violence on many sides, on many sides. It's been going on for a long time in our country. Not Donald Trump, not Barack Obama. It's been going on for a long, long time. It has no place in America. What is vital now is a swift restoration of law and order and the protection of innocent lives. No citizen should ever fear for their safety and security in our society, and no child should ever be afraid to go outside and play or be with their parents and have a good time.

I just got off the phone with the governor of Virginia, Terry McAuliffe, and we agreed that the hate and the division must stop and must stop right now. We have to come together as Americans with love for our nation and true affection — and really, I say this so strongly — true affection for each other.

Our country is doing very well in so many ways. We have record, just absolute record employment. We have unemployment, the lowest it's been in almost 17 years. We have companies pouring into our country, Foxconn and car companies and so many others, they're coming back to our country. We're renegotiating trade deals to make them great for our country and great for the American worker. We have so many incredible things happening in our country, so when I watch Charlottesville, to me, it's very, very sad.

No, Donald Trump, what is "very, very sad" is that the president of the country cannot even give a delayed response to horrific violence carried about by a seething, hate-driven mob in the name of retrogressive bigotry without patting himself on the back.

"True affection" for each other requires a little less affection for your own image and extremely fragile ego.