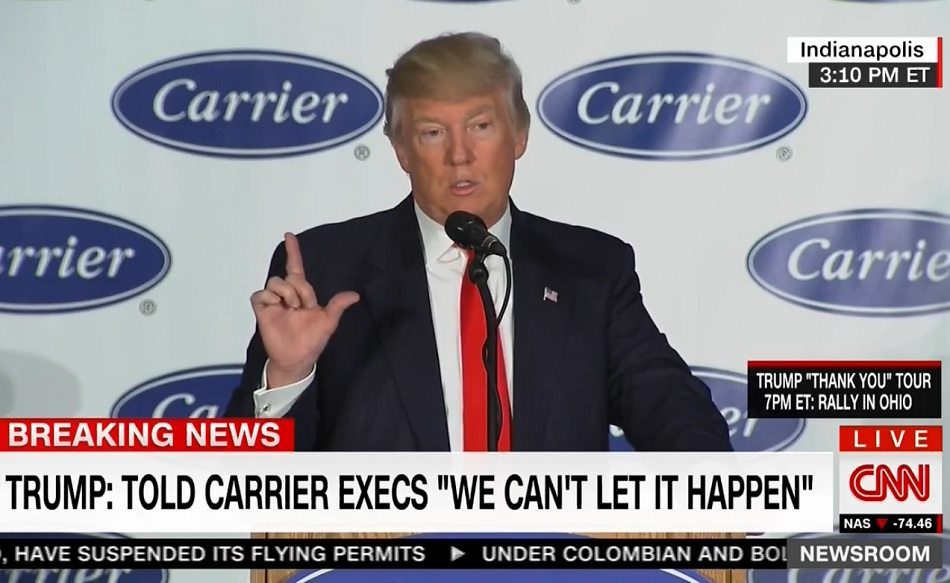 photo via screengrab
Get The American Independent in your inbox

President-elect Donald Trump did a victory lap over a deal that he claimed will save 1,100 jobs in Indiana from being shipped to Mexico. But the truth is that HVAC company Carrier is still shipping 1,300 jobs across the border while receiving an exorbitant pay-out in return.

Donald Trump took the stage in Indianapolis for a rambling 20-minute speech in which he boasted about his deal with manufacturing company Carrier to save 1,100 jobs at the company's plant in Indiana:

But, I will tell you that United Technologies and Carrier stepped it up and now they're keeping—actually, the number's over 1,100 people which is so great, which is so great. And I see the people, I shook hands with a lot of the people. They're right behind us working... I did say one thing to the Carrier folks, and to the United Technologies folks, I said, "The goodwill that you have engendered by doing this, all over the world, frankly, but within our country, you watch how fast you're going to make it up, because so many people are going to be buying Carrier air conditioners."

Even if Trump were telling the truth, this would represent a broken promise, because as Shareblue has pointed out, Trump pledged during the campaign that he would save jobs simply by threatening high tariffs, and specifically promised not to give tax incentives.

But despite Trump's self-congratulation, the company is still moving 1,300 jobs out of Indiana:

The company still plans to move 600 jobs from the Carrier plant to Mexico. It also will proceed with plans to close a second plant in Huntington, Ind., that makes electronic controls, moving another 700 jobs to Mexico.

Additionally, only 800 of the jobs being saved were marked to go overseas. The other 300 were "research and headquarters positions that weren’t slated to go to Mexico."

Trump has sworn that there would be consequences for companies that ship jobs over the border or overseas. But Carrier is not being dealt any consequences — they are being paid off with $7 million in tax breaks.

That handsome concession is the work of Vice President-elect Mike Pence. He may have claimed during today's victory lap that he was "humbled to have played some small role in this wonderful news." But the fact is that Pence, in a curiously auspicious situation, is still serving as both Governor of Indiana and the self-appointed head of a state board that controls the finances used for taxpayer-funded deals like this one. He retained his governorship and his position on that board in order to make this deal happen.

Trump is claiming heroics for a broken promise and a dreadful deal that Pence used his position in the state to orchestrate.

And whatever plaudits they are receiving are undeserved. Josh Bivens at the Economic Policy Institute explains:

[E]ven if this was somehow a good deal from a public policy perspective, it’s an entirely not-scalable approach to solving the challenges of globalization. A world in which your job depends on whether or not you’re useful as a public relations prop for the President is not a recipe for broad-based security.

And, the deal is a policymaking disaster. The precedent it sets is horrendous. A company announced a plant would move. A president and vice-president-elect offered them a deal that included tax breaks to stay. Why wouldn’t every employer in the country now not publicly announce they’re moving unless they get some government largesse?

...Again, the lesson to American workers and companies here is clear: if you can manage to make your cause a helpful PR stunt for the Trump administration, he just might be willing to help you by giving a raw deal to other workers. But you better be the first in line and useful to Trump’s own political fortunes.

If this is President-elect Trump's idea of making "the best deals," we are all in trouble.