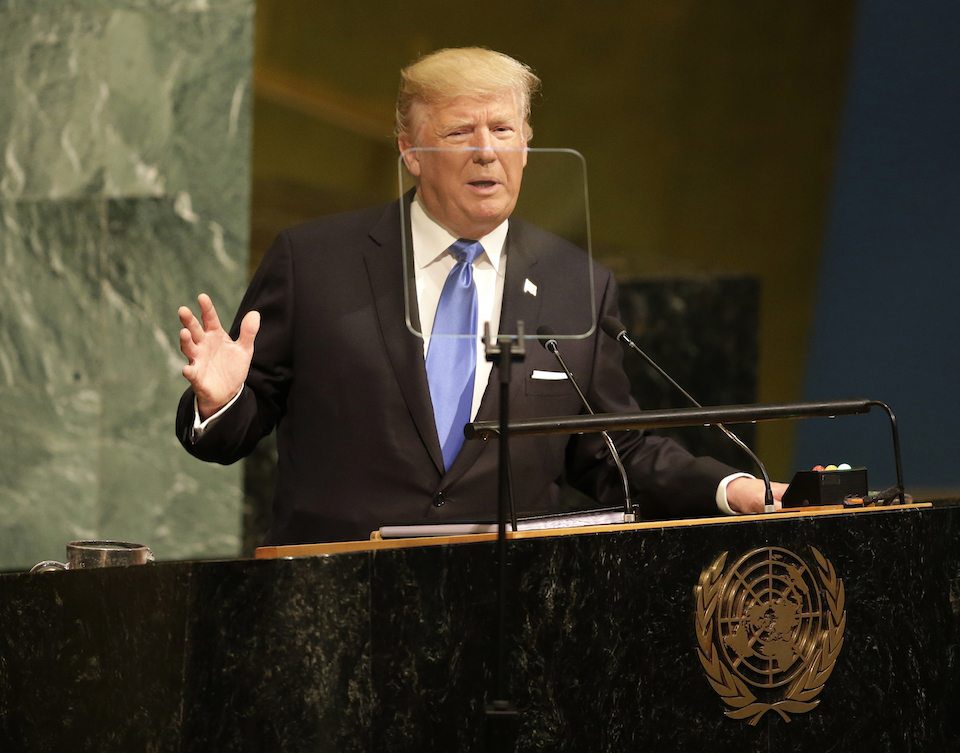 Donald Trump embarrassed America in front of the world yet again, turning his speech before the United Nations into a session stroking his own ego, while sounding like a campaign speech.

Donald Trump showed again that he is pathologically unable to speak in any capacity without bragging about his personal successes, while also inappropriately campaigning for a second term.

Trump used his first remarks to the United Nations Monday to crassly promote Trump Tower, located across the street from UN headquarters.

On Tuesday, he turned his first-ever speech in front of the United Nations into another opportunity to speak about his election victory.

Trump also demonstrated his well-documented envy of President Barack Obama, alleging that the favorable economic conditions currently being experienced across the country were a result of his election. Trump rattled off a series of positive economic indicators, as if he were at a re-election campaign rally instead of at a meeting of world leaders.

TRUMP: Fortunately, the United States has done very well since election day last November 8th. The stock market is at an all-time high, a record. Unemployment is at its lowest level in 16 years, and because of our regulatory and other reforms, we have more people working in the United States today than ever before. Companies are moving back, creating job growth the likes of which our country has not seen in a very long time. And it has just been announced that we will be spending almost $700 billion dollars on our military and defense. Our military will soon be the strongest it has ever been.

His claim that his policies have generated unprecedented job growth are false. His policies have already impeded the growth that America experienced under Obama, with this year's figures lower than in 2016 as Trump has interfered with government hiring.

Trump showed again that he cannot step up to the plate at international meetings and conferences, as the impulse to promote himself — and his financial interests — continually overwhelms the chances to demonstrate American leadership on the global stage.

The United Nations is not simply a background for a pro-Trump sales pitch or a venue that should be used for domestic electoral politics. It is the preeminent venue for international diplomacy, issues that affect the lives of every American, and billions of people all over the world.

Trump threw that out the window, to again service the interests of only one person: Donald Trump.