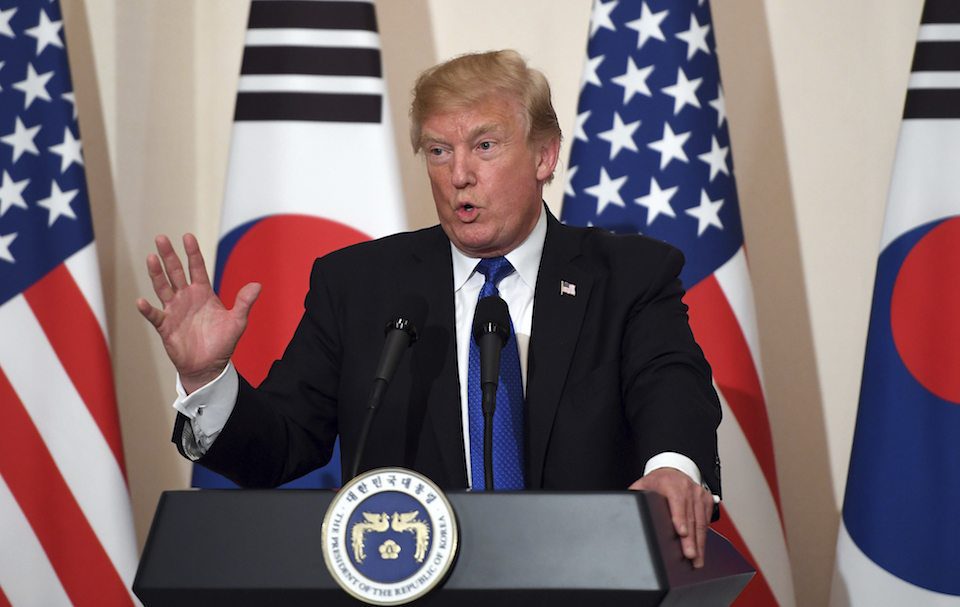 Trump apparently wants credit for passing up a "beautiful, very fancy lunch" to have one meal with troops stationed in Korea.

Donald Trump is in the middle of his diplomatic trip through Asia, and by all accounts, his behavior in Japan was mortifying.

But Trump is not planning to clean up his act as he heads to the Republic of Korea — a U.S. ally gravely threatened by Trump’s reckless provocation of North Korean dictator Kim Jong Un. Instead, he wants to put on a show of how much he loves the troops stationed there.

In remarks at Camp Humphreys in South Korea, Trump boasted about his decision to eat with the troops.

This juvenile boast, in which Trump apparently wants credit for giving up a "fancy lunch" to have one meal with troops stationed overseas, is simply the latest salvo in months of Trump rhetoric on support for America’s men and women in uniform — which also formed the disingenuous basis of his attacks on black NFL players kneeling to protest police brutality.

He has disrespected every service member, veteran, and military family who has ever been a political inconvenience to him. It took him nearly two weeks to even acknowledge the deaths of four U.S. troops killed in an ISIS ambush in Niger last month. When he belatedly called the family of Sgt. La David Johnson, ostensibly to offer condolences, he was not only insulting and disrespectful, but then denied the family's own accounting of the call, essentially accusing Johnson's widow,  Myeshia Johnson, of being a liar.

Trump has also claimed that POWs are not really war heroes and launched a relentless smear campaign against Russia special counsel Robert Mueller, who won the Bronze Star and Purple Heart in Vietnam.

On the same day he boasted about giving up a "fancy" meal to eat with troops, he attacked Ralph Northam, the former Army doctor running for governor of Virginia, ridiculously claiming Northam is "weak" on veterans.

And the troops appear to have noticed. Polls have found that Trump’s support in military communities — traditionally a reliable source of Republican votes — is underwater.

Trump has nothing in his temperament or actions to show that he really cares about the people fighting to defend our nation and our freedom. If his only gesture for the troops is to eat lunch with them, his administration is in a sorry state indeed.