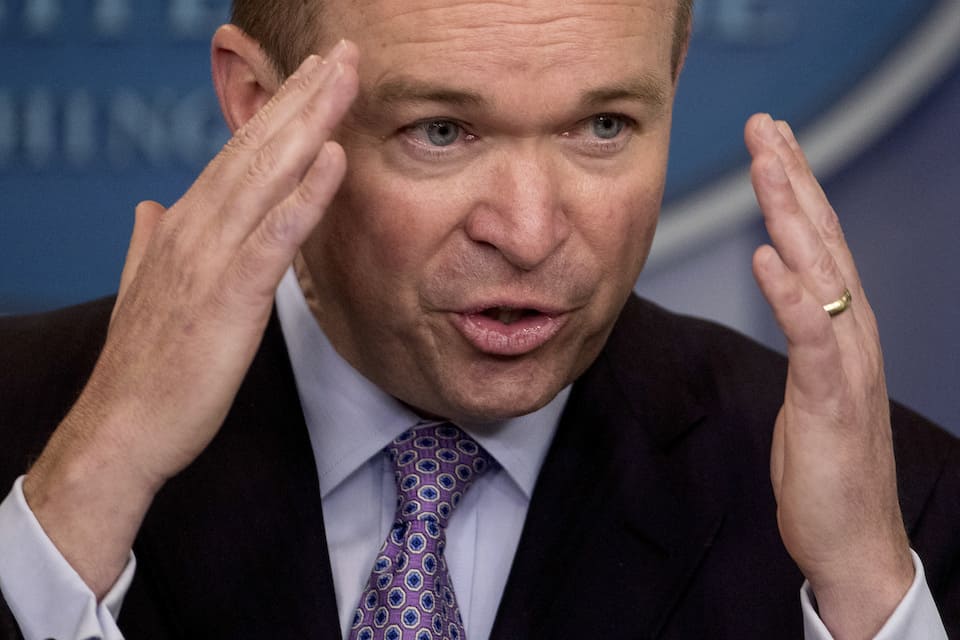 Donald Trump's budget director expressed his hopes that people receiving Social Security disability payments will be cut off, thanks to the newly introduced Trump budget.

Donald Trump's proposed budget is a cruel attack on the nation's most vulnerable citizens in order to give tax cuts to the wealthiest Americans.

In addition to gutting funds for Medicaid, which would essentially cut health care for millions of low-income families, the budget is also intended to cut the Social Security Disability Insurance program. That's according to Trump's budget director, Mick Mulvaney, who told reporters he hopes individuals who currently receive disability benefits will receive less.

MULVANEY: It is a welfare program for permanent — for the long term disabled. It is not what most people would consider to be Social Security.

REPORTER: Will any of those individuals who presently receive SSDI receive less as a result of this budget.

MULVANEY: I hope so. If there are people who are getting SSDI who should not be getting it.

REPORTER: Those people who should be getting it.

MULVANEY: Oh, no. If people are really disabled. And there are folks who need this program. Listen—

REPORTER: So how are you going to better determine who is getting it that because there are so many anti-fraud programs that exist.

MULVANEY: Yeah it's a great question and I could get down into the weeds. One of them is that we have — one of the proposals is we have the proposals we have his how we pick the administrative law judges — because I think it's a lifetime appointment on day one, so we try and phase them in so they're not — there's been several judges accused of sort of abusing the program.

But to your point, your point is an excellent one. We're not kicking anybody off of any program who really needs it. That's not — we have plenty of money in this country to take care of the people who need help. Okay? And we will do that. We don't have enough money to take care of people — everybody who doesn't need help. So what we try and do is look at these programs, again, through the perspective of the people paying for it.

Mulvaney also argued that the guidelines for determining disability are too generous, and that the administration's proposed cuts are intended to correct that leniency. But it is not easy to receive such benefits, contrary to the popular conservative portrayal.

Asked about Trump's campaign pledge to keep Social Security intact, Mulvaney argued that disability benefits are "not what most people consider to be Social Security," so the cuts are OK.

One in five Americans has a disability, and efforts to cut these payments would negatively affect the lives of millions.

The admission from Mulvaney comes as Trump's budget lands with a thud, cutting billions in services and benefits for the neediest in America while increasing defense spending and making special carve-outs for the ultra-wealthy.

While the Trump budget aims to hurt millions of Americans who rely on the social safety net, it boosts the already vast fortunes of the very few who are affected by taxes on the rich, like the estate tax. Helping the rich, at the expense of the rest of the country, is a far cry from what Trump promised as a candidate.