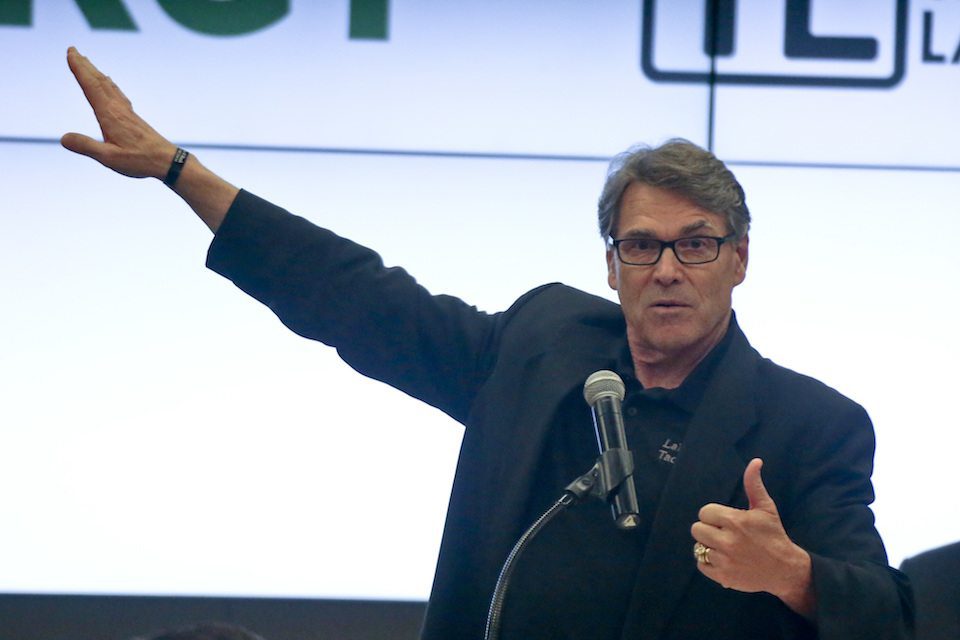 Energy Secretary Rick Perry is the latest member of Donald Trump's Cabinet who has been caught flying on a private charter plane at taxpayer expense. Perry reportedly took a chartered jet to fly to Ohio, only a day before Tom Price resigned as health secretary for doing the same.

Perry's private trip was confirmed by the Energy Department. He flew from Hazleton Regional Airport in Pennsylvania to the Greater Portsmouth Regional Airport in southern Ohio on Sept. 28. He made the trip to visit a uranium facility in Piketon, Ohio.

Citizens for Responsibility and Ethics in Washington (CREW) has called for a government-wide investigation into the flight scandal, as well as new guidelines for the use of commercial aircraft by agency officials.

"These officials appear to have forgotten that their role as public servants comes first," CREW Executive Director Noah Bookbinder said in a statement. "At a time of severe cuts to the federal budget, these officials are needlessly spending taxpayer dollars on luxury private jets or costly government flights instead of looking for ways to save taxpayer money."

The behavior of his Cabinet echoes Trump, who has flown to his personal properties nearly every weekend of his administration rather than staying at the White House or going to Camp David.

"When you have a president who is visiting his private resorts every weekend at great cost to taxpayers," Bookbinder noted, "it is not surprising that cabinet members are using private jets to get to standard meetings."

Price resigned after offering to pay $52,000 for his private travel, a tiny fraction of the $1 million he charged to taxpayers for his travel.

Two other Trump Cabinet officials are under investigation by the inspector general, the government's internal watchdog for waste and abuse, in the scandal some are calling "Billionaire Air."

EPA chief Scott Pruitt and Interior Secretary Ryan Zinke racked up thousands of dollars in taxpayer spending for private charter flights, and are refusing to pay back the government for their travel. Both men are using the excuse that ethics lawyers sanctioned the travel.

The flight scandal is also affecting Trump's most trusted advisers.

The top-ranking Democrat on the House Oversight Committee, Maryland's Elijah Cummings, has sent a letter to the White House seeking records and details of Kellyanne Conway's travel. She accompanied Price on several of his luxury trips, but as of yet has not offered to pay back the costs.

Conway recently was the beneficiary of a major financial windfall after the sale of her polling company. Thanks to a provision in government ethics rules, Conway will be able to defer capital gains taxes on the sale.

She and her husband have a reported net worth of about $39.3 million, and she makes a six-figure salary, but now has even more funds that could be used to pay back taxpayers for her trips. The value of her firm was estimated to be up to $5 million.

Trump has the wealthiest Cabinet in modern history, yet his ultra-wealthy secretaries and advisers seem addicted to luxury travel on America's tab.