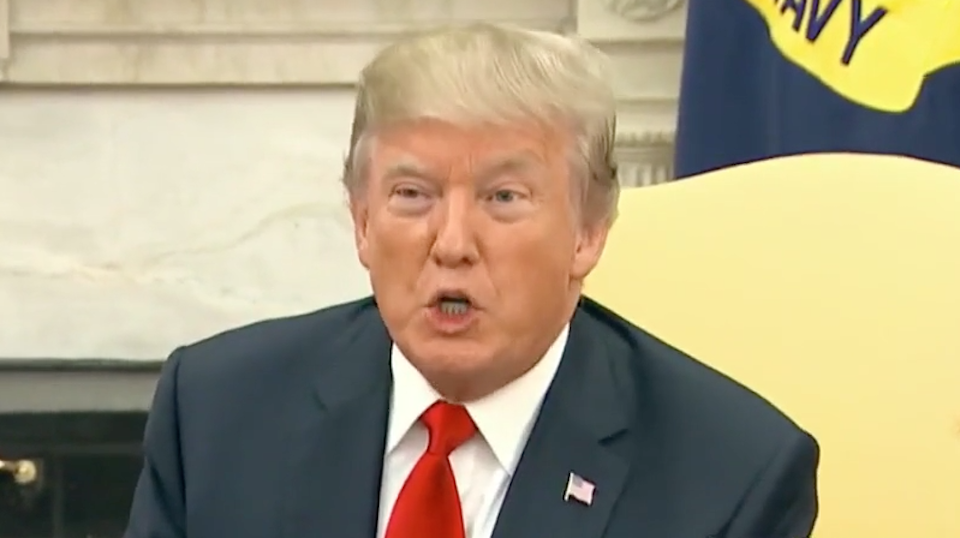 Donald Trump attacked the free press and the First Amendment, declaring it "disgusting" that journalists are able to "write whatever they want to write."

Donald Trump declared the First Amendment of the U.S. Constitution "disgusting" in a press availability at the White House.

Appearing alongside Canadian Prime Minister Justin Trudeau, Trump said, "It's frankly disgusting the way the press can write whatever they want to write and people should look into it."

The dictatorial remarks were made hours after Trump tweeted that he would like to pull the license of NBC after the network's reporting embarrassed him, and less than a week after Trump tweet-raged that Congress should investigate the free press.

In the last few days, NBC has reported that Secretary of State Rex Tillerson called Trump a "moron" and that he asked his top military advisers to increase the American nuclear arsenal tenfold.

Despite Trump's stance, the Constitution is quite clear on the rights of Americans on this issue. The First Amendment, in its entirety, reads:

Congress shall make no law respecting an establishment of religion, or prohibiting the free exercise thereof; or abridging the freedom of speech, or of the press; or the right of the people peaceably to assemble, and to petition the Government for a redress of grievances.

The First Amendment means the press can — and should — report on the president of the United States, his activities, behavior, reactions to that behavior, whether he likes it or not.

Hundreds of thousands of Americans over 241 years have lain down their lives to defend this principle.

They lost their lives at Pearl Harbor, Normandy, Berlin, Selma, Memphis, and hundreds of cities and town around the world to defend the right to free speech and a free press as enshrined in the Constitution.

In fact, only a week ago, four U.S. troops were killed in action in Niger, reportedly by ISIS, though Trump has failed to in any way acknowledge their deaths.

Donald Trump, no matter how much he aspires to be a dictator, cannot change this bedrock principle of America's system. He will be resisted at every turn if he chooses to do so.