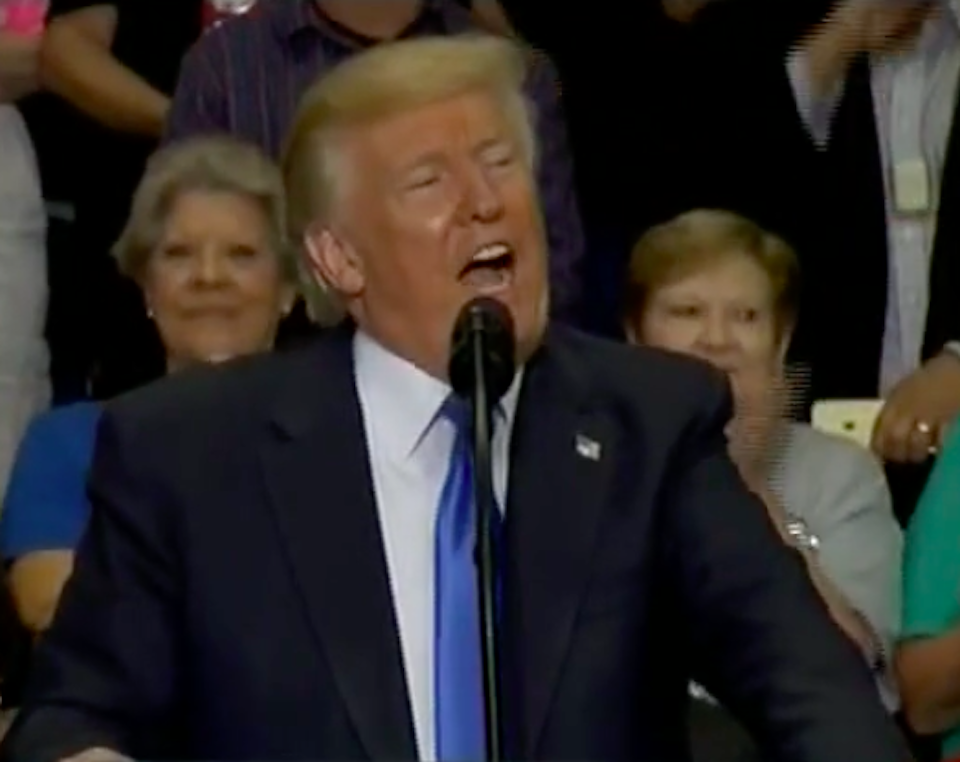 A campaign rally in Ohio took a dark turn back toward 2016, as Donald Trump offered a vile and hateful assessment of "predators and criminal aliens" to justify his administration's draconian immigration policies.

In a highly disturbing display, frighteningly reminiscent of his presidential campaign, Donald Trump unleashed a vicious anti-immigrant rant at a rally in Ohio Tuesday night — a campaign event just six months into his presidency.

Trump went on a lengthy diatribe about the supposed need to "liberate" cities in the United States from undocumented immigrants.

And he praised Immigration and Customs Enforcement for their crackdown on "bloodthirsty criminal gangs," pointedly noting to a repulsively gleeful crowd, "We're not doing it in a politically correct fashion."

"We're doing it rough," he declared.

He rambled on about "our people" being "tougher and stronger than their people."

And it was crystal clear who he meant by "their people," and just what he thinks of most undocumented immigrants.

In words dripping with gratuitous violence and zero nuance, Trump painted a villainous picture to amp up the crowd and stoke their fears for his own purposes.

One by one, we are finding the illegal gang members, drug dealers, thieves, robbers, criminals, and killers. And we are sending them the hell back home where they came from. [applause] And once they are gone, we will never let them back in, believe me. [applause]

The predators and criminal aliens who poison our communities with drugs and prey on innocent young people — these beautiful, beautiful, innocent young people — will find no safe haven anywhere in our country. [applause] And you've seen the stories about some of these animals. They don't want to use guns, because it's too fast and it's not painful enough. So they'll take a young, beautiful girl, 16, 15, and others, and they slice them and dice them with a knife, because they want them to go through excruciating pain before they die. And these are the animals that we've been protecting for so long. Well, they're not being protected any longer, folks. [applause]

In Trump's view, this characterization is the rule, rather than exception.

But in the view of reality, the opposite is true: Immigrants are actually less likely to commit crimes than native-born citizens.

And the people swept up in ICE raids are by and large not murderers and drug dealers, but rather are victims of crime themselves, young people trying to attain an education, chronically ill patients, business owners — all with no violent crimes to their names and who pose no danger to anyone around them.

There are children who are losing their parents to Trump's raids. If he truly cares about "innocent young people," they ought to be included as well.

But don't be fooled: Trump's repugnant rant at this rally was not about "liberating" cities from criminals or protecting young girls from predators.

It was about building up the anger and suspicion among his base that fed his 2016 campaign. Apparently, if it worked for him once, he is ready and willing to go back to that vile well again.