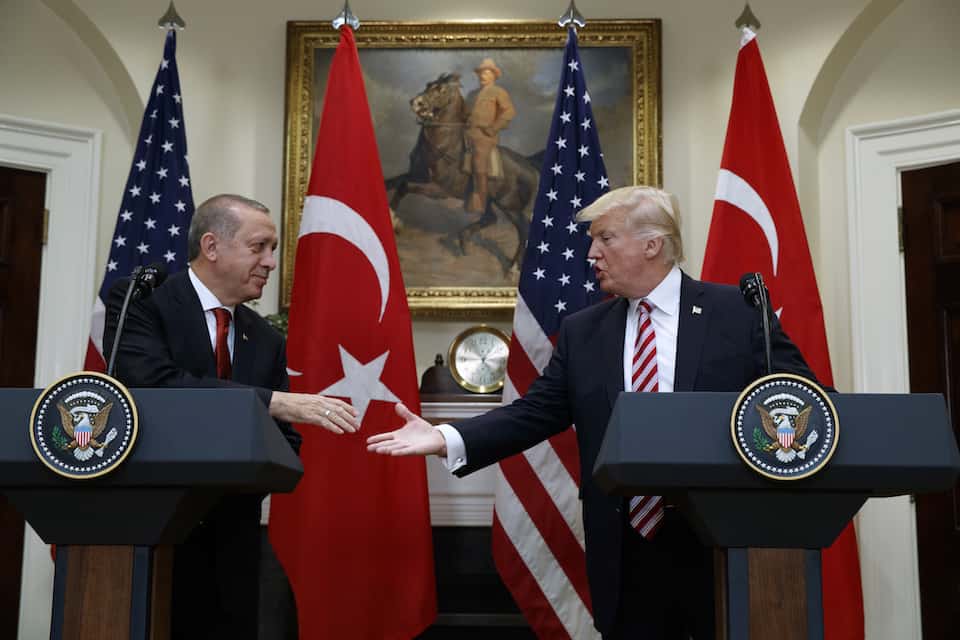 Donald Trump's pattern of praise for authoritarian leaders and desire to deepen relationships with them continues.

Following the White House meeting with Turkey's autocratic leader, President Recep Tayyip Erdogan, Donald Trump spoke about the "great honor" of Erdogan's visit, and Erdogan called Trump a "dear friend" and congratulated him on a "legendary triumph" in the 2016 elections:

In the Oval Office, Pres Trump calls it a "great honor" to have meeting with Pres Erdogan - but mispronounced his name. pic.twitter.com/vU8W1wPeK3

Erdoğan just congratulated Trump for his “legendary triumph,” according to the translation

Trump's White House invitation to Erdogan is viewed by many as implicit approval for repressive and authoritarian leaders around the world and comes on the heels of Trump praising Erdogan for forcing through legislation granting him unchecked powers in his own country.

Prior to that power grab condemned by democratic leaders worldwide (except Trump), Erdogan lay the foundation for it by detaining approximately 40,000 people he perceived as political dissidents, firing almost 90,000 civil servants, closing down hundreds of independent media outlets and non-governmental organizations, and arresting an unknown number of journalists, activists, and even members of parliament.

Notwithstanding the United States' history of support for allied dictators abroad, the U.S. has a long-standing tradition of maintaining vocal and material support for human rights as part of official government policy and has served as an example of a nation where the rule of law was largely observed on the domestic front. Trump's brief tenure in office has already changed both of those facts.

In his first speech to the staff of the State Department, Trump's Secretary of State Rex Tillerson diverged from forty years of bipartisan consensus on human rights as a core U.S. value and famously described this tradition as "an obstacle" to advancing "our national security interests, our economic interests." By firing of former FBI Director James Comey, Trump also called into question the ability of the U.S. government to continue to govern by rule of law. As Washington Director of Human Rights Watch, Sarah Margon, noted, "There’s a credibility issue [for the U.S.] when it comes to the rule of law, particularly with the firing of Comey."

It would be difficult to overstate the damage already done by Trump and his team to the reputation of the U.S. and our relationships with our allies abroad.

Trump both uses the tactics of "despots and tyrants" and consistently demonstrates a disturbing affinity for them. His meeting with Erdogan is yet another piece of evidence in this regard and should cause concern among all those who value human rights, the rule of law, and our democracy.