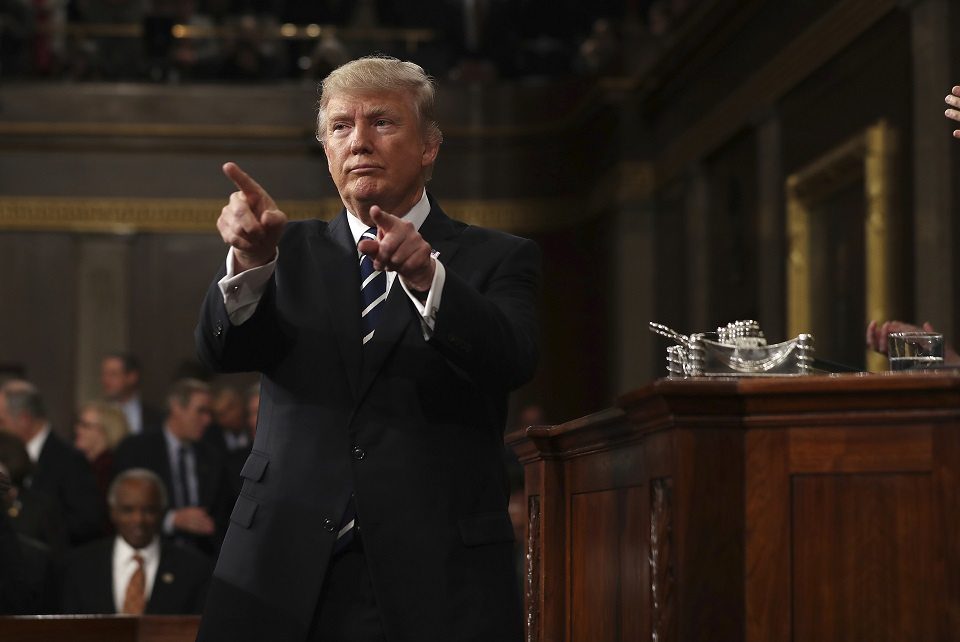 The mainstream media is falling back into an old pattern of enabling the worst possible presidential behavior by praising Donald Trump’s disastrous address to Congress.

George W. Bush once infamously said, "Fool me once, shame on...shame on you. Fool me — you can’t get fooled again." But the mainstream media’s reaction to Donald Trump’s speech before Congress shows that in the case of the press in America, they are not only susceptible to being fooled time and again, but appear to be outright looking to be fooled.

Trump’s speech was packed to the gills with lies, exaggerations, xenophobia, and all manner of falsehoods. Few of the lines read off a teleprompter — which he repeatedly attacked President Obama and Hillary Clinton for using — had any truth, and even when not lying, Trump was touting ideas and policies designed to hurt the most vulnerable communities in America.

It was a bad speech, unworthy of the office he holds.

But the mainstream press is apparently tired of reporting on an unpopular president with an unpopular legislative agenda who has failed to get the basic daily functions of the federal bureaucracy staffed at a reasonable level (though it has plenty of billionaires, men, and cronies), let alone delivering on what the country needs.

Because Trump spoke in uncharacteristically measured tones, the media has decided to fall over themselves in a rush to praise him, largely ignoring the actual substance — or lack thereof — of his words.

We have been here before.

After Bush won the 2000 presidential election — even though the majority of voters had chosen Al Gore (sound familiar?) — he saw his approval numbers continue to collapse until the terrorist attacks on September 11. Despite the fact that Bush had ignored a warning memo in August, the press rallied to his side, declaring him a "popular wartime president," a moniker that would continually be echoed as he and his administration lied and led us into war in Iraq, where no weapons of mass destruction would be found and over 4,500 American soldiers would lose their lives.

The press helped make the war happen, by refusing to be skeptical of Bush’s rhetoric, arguing that Democrats should tone down their criticism of him as he made the fraudulent case for war and as he fabricated successes as the war went poorly (Bush declared victory months before the insurgency began taking hundreds of lives), and by transmitting administration propaganda in outlets like the New York Times.

Yet, fourteen years later the media is doing it all over again, crowning Trump's address as another "pivot" even though it was mired in the same old bigotry, bluster, and incompetence.

Outlets like NPR, Politico, The Washington Post, and ABC all came to the same false conclusion. And individual pundits piled on in a Greek chorus.

As Trump again demonized undocumented immigrants, despite the mountains of objective evidence that debunks Trump’s argument that they are a source of crime and chaos, he was hailed on Fox News by anchor Chris Wallace, who said the xenophobic speech "was one of the best speeches in that setting, that I’ve heard any president give."

As white supremacists hailed the speech, even the White House could not believe the pass it was getting from the media. The Washington Post’s Robert Costa reported, "Some sources in WH are frankly surprised at how pundits are warming to the speech. Say Trump has not changed, no big shift in policy coming."

There is not a new Trump, and there never will be. He is the same clueless, racist, bumbling warmonger he has been on the national political scene since he decided to run for office in 2015. He is the same guy who demanded that the first Black president of the United States present him with his birth papers.

The Trump the press is pining for does not exist, only the man who, just days ago, declared that the free press is the enemy

Praising him will not change his attacks on the media, nor will it deter his ardent followers from their anti-Semitic, racist, and sexist attacks on the free press.

Propping his presidency up because he expressed himself in a more presentable manner will not lessen or reduce the damage and destruction of his presidency, or the disasters to come on his watch as he dodges responsibility and casts blame away from himself.

The press is courting the same type of disastrous outcomes that resulted from their coddling of George W. Bush, and with the uniquely unprepared and unqualified Donald Trump, the aftermath could be even deadlier and catastrophic for the country and the world.