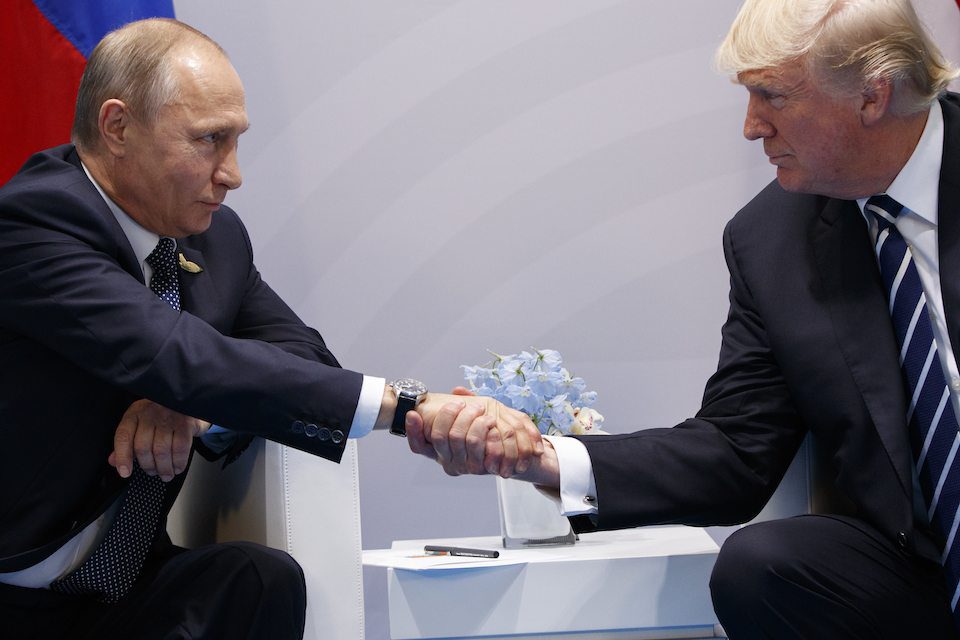 Donald Trump is further alienating our allies to appease Russia.

The Trump administration's eagerness to cooperate with Russia is getting scarier by the day.

Just as the State Department announces that it will be shutting down its Office of the Coordinator for Cyber Issues, Russian media is reporting that the joint cybersecurity task force Donald Trump and Vladimir Putin discussed during their extended meeting at the G20 summit "is underway without doubts."

In other words, it seems Trump's State Department is winding down its cooperation with other countries that did not try to hack our election to instead work with the country that hacked into our election systems in 39 states to try to install Trump into the Oval Office.

Trump's intention to sell out America's national security to cooperate with a hostile foreign nation was first revealed after his meeting with Putin. It was, unsurprisingly, met with universal condemnation and scorn — from Democrats and Republicans.

The Trump administration then appeared to backpedal, with Trump tweeting that the idea probably wouldn't work anyway, and Mike Pence parroting the line in a right-wing radio interview.

But according to Russia, the plan is moving forward.

The story, as well as the source, would be impossible to take seriously if not for the pattern of Trump's administration appearing shockingly eager to give Russia whatever it wants. Russia has demanded that the United States return two "spy compounds" on U.S. soil, which were seized after the 2016 election in retaliation for Russia's interference. It's such an absurd request, and yet it's one the Trump administration is looking to fulfill.

This, despite a nearly unanimous vote by the Senate to keep sanctions on Russia in place.

There's also news this week that Trump has decided to end a CIA operation in Syria, a move U.S. officials says has been "long sought by Russia." While there had been discussion of ending the program before Trump came to office, the idea of giving such a concession to Russia with no strings attached is considered absurd, even by the program's critics.

One former White House official said, "It was not something you'd do for free," and to end it "without getting anything in return would be foolish."

In light of all the other concessions to Russia, and Trump's continued defense of the country that tried to rig our election to benefit him, the idea that Trump would give Russia access to our cybersecurity information does not look so impossible after all.

But it is terrifying, and it raises even more questions about why Trump — who bashes our friends and allies, and even his own party — is so eager to do Russia's bidding.