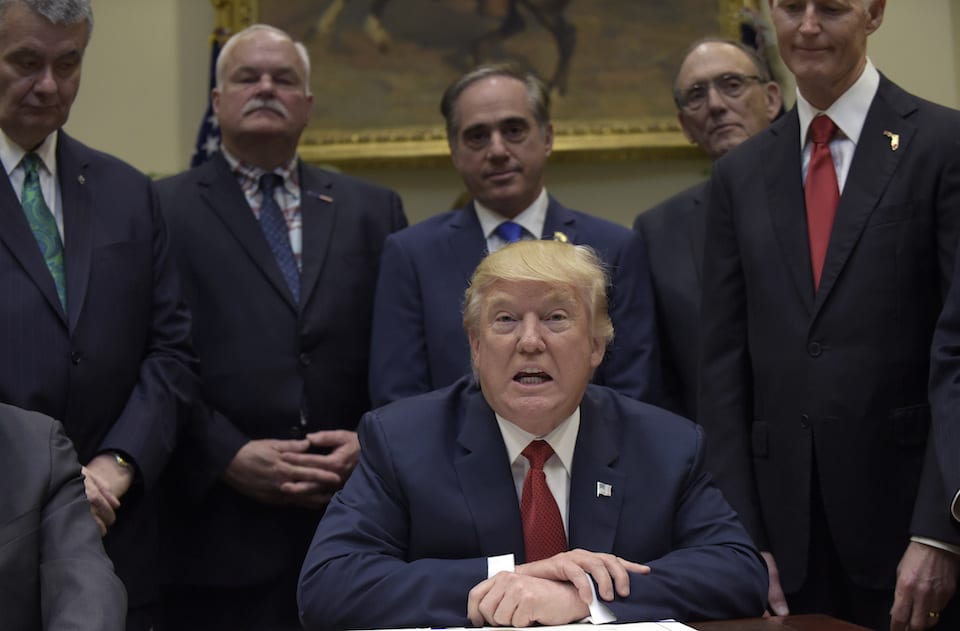 Donald Trump thanked a long list of people when he signed the Veterans Choice Program Extension And Improvement Act, but failed to mention the bill's Democratic author, or the 12 other Democrats who co-sponsored the bill.

As we reported earlier, Press Secretary Sean Spicer tried to give Donald Trump credit for the Veterans Choice Program Extension And Improvement Act.

But in fact, the bill was sponsored by Democratic Senator Jon Tester (D-MT), whose Democratic co-sponsors outnumbered Republicans by 12-8.

But when signing the bill into law, after passing both houses by unanimous voice vote, Trump didn't even have the class or dignity to mention the Democrats, let alone thank any of them:

Good morning. We're honored to join and be joined today by some absolutely tremendous people and great veterans. Thanks, as well -- and I have to thank them dearly -- but as well to Representative Phil Roe. Where is he? (Shakes hands.) What a job you've done. And all the members of Congress who worked on the bill that we're about to sign. Such an important bill.

I especially want to thank Senator John McCain and Senator Johnny Isakson. They have been incredible in working with us. Let me also welcome my good friend, Florida Governor Rick Scott, a Navy veteran who's here with us to represent more than a million veterans from the state of Florida. We're also joined by the leaders of a number of veterans groups. I want to thank all of them for being here and all of the tremendous and important work that they do. We would not be here if it weren’t for them, I can tell you that.

Finally, I want to thank our Secretary of the VA, David Shulkin, who, by the way, was approved with a vote of 100 to nothing. That's shocking, right? (Laughter.) One hundred to nothing, really. Now, you wouldn’t be getting 100 to nothing.

Trump is certainly not known for his generosity of spirit, but to play partisan politics with something as sacred as our duty to veterans, whom Trump's policies continue to harm, is truly cheap — even for him.