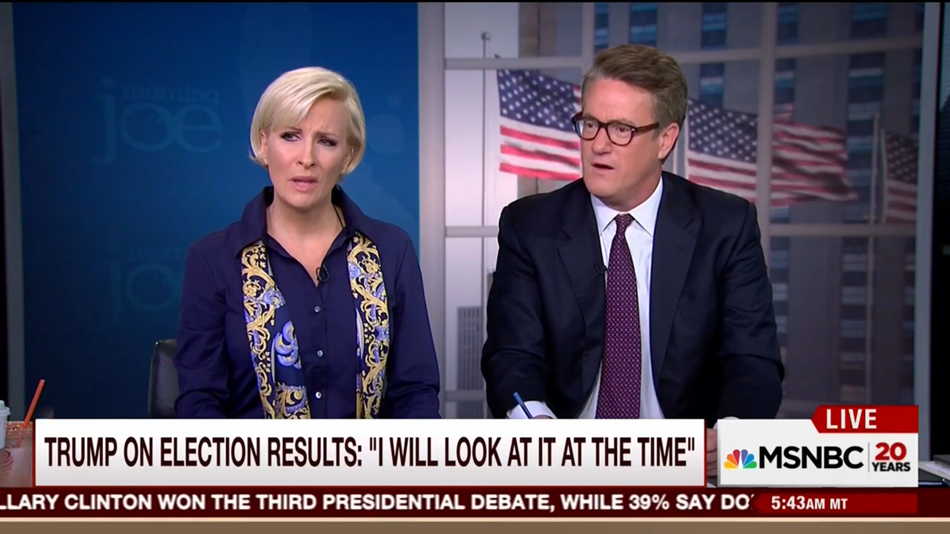 Donald Trump's claim that the political media are conspiring to elect Hillary Clinton doesn't pass the smell test. Their pervasive hostility to her has been chronicled in detail, best exemplified by nearly 600 days of continuous email coverage. And if the media are really "rigging" the election against Trump, how does he explain the sycophancy he gets from Morning Joe, the repository of Beltway conventional wisdom? Not to mention the billions worth of free press he received over the course of the election?

Trump's deliberate effort to undermine the democratic process is unprecedented in our history.

Trump, enemy of democracy:
1) My opponent shouldn't be allowed to run
2) If I lose, I may dispute outcome
3) If I win, she will go to jail.

Reporters with a conscience are covering Trump's statements with the grave concern they deserve. But not the Morning Joe crew. Joe Scarborough and Mika Brzezinski are in full defense mode, spinning with ever-increasing ferocity for their favorite candidate:

Somebody tell Joe and Mika that playing by the rules and respecting the results is not an "elite issue." It's an American issue. #morningjoe

Joe notices twitter has blown up against him and is now addressing that in the show. Dude give it up we have video. #morningjoe #newsonenow

Morning Joe has a relatively small audience, but they are still the repository of conventional wisdom for elite Beltway pundits. Their sycophancy has been a shameful aspect of 2016 election coverage.

As for Team Trump's whining about the national media rigging the election against him, there is this:

No @KellyannePolls, you won't get away with the ludicrous claim that the media favor #Hillary. The opposite is true: https://t.co/T31rNSiHTD