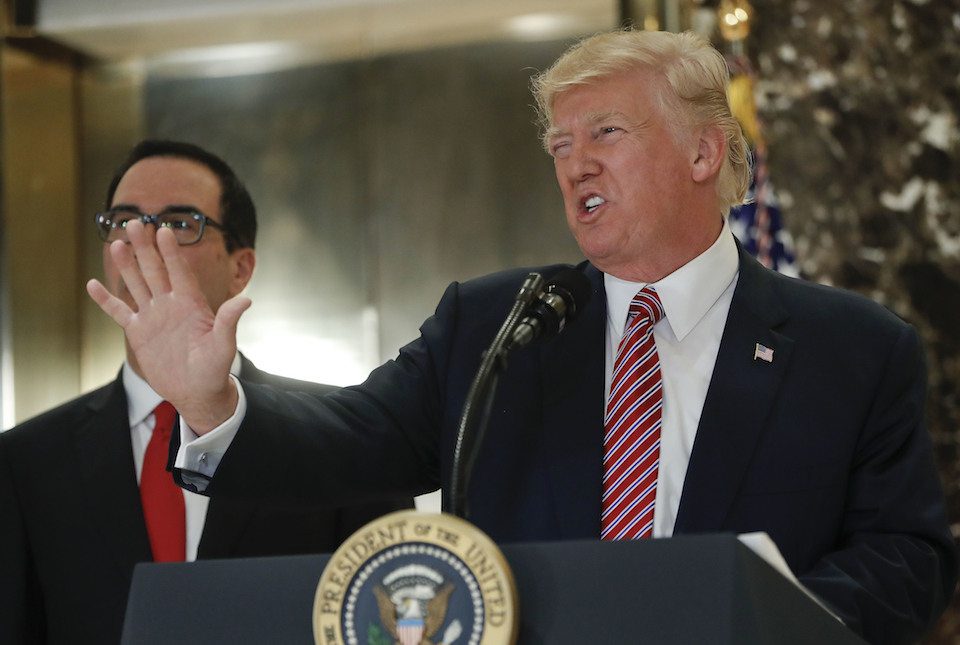 In a shocking meltdown, Donald Trump compared America's Founding Fathers to the Confederacy, and equated anti-racist protesters with white supremacists.

Donald Trump held a press conference in Trump Tower in New York City where he equated America's founding fathers to the pro-slavery Confederacy, and continued to claim that white supremacists and liberal protesters were morally equivalent.

Trump has been under fire for his slow, plodding response to the domestic terror attack in Charlottesville, Virginia, where one woman was murdered and another 19 injured, and the perfunctory statement he grudgingly read nearly 72 hours after the death.

Trump was combative with the media, who were trying to get answers from him to explain why he continues to make excuses from white supremacists. They were strong backers of his election, and continue to support his presidency. Trump also has supporters of the extremist movement in key positions in his White House.

Discussing the movement to remove Confederate monuments across the country, Trump complained that to do so would lead to the removal of monuments to Founding Fathers like George Washington and Thomas Jefferson. In doing so, Trump equated the men who created America with the break-away rebellion that declared war on the country, in defense of keeping slavery — human bondage — intact.

He also complained that taking down Confederate statues is "changing history" and "changing culture."

Trump echoed his comments on the day of the attack, asserting that there was moral equivalency between the white supremacist murderers and liberal protesters in Charlottesville, comparing the counter-protesters to the neo-Nazis and Klan members.

"There was a group on this side — you can call them the left, you've just called them the left — that came violently attacking the other group," Trump said. Then he added, "Yes, I think there's blame on both sides. You look at both sides, I think there's blame on both sides. I have no doubt about it, and you don't have any doubt about it either. And if you reported it accurately, you would say that."

#Breaking: President Trump on Charlottesville: There’s “blame on both sides, and I have no doubt about it.” https://t.co/Rkaz4DJi1g

REPORTER: Are you putting the alt-left and white supremacists on the same moral plane?

Asked why he waited so long to condemn the white supremacist and neo-Nazi riot in which a woman was murdered, Trump said:

Trump then re-read the statement in which he had refused to condemn white supremacists and instead blamed "many sides."

Then he added, "When I make a statement, I like to be correct. I want the facts."

Trump has made his personal political brand on the fact that he quickly responds to issues on social media, usually without knowing any of the facts at hand. He only seems to slow down when white supremacists are on the agenda.

"Honestly," he continued, "if the press were not fake, and if it was honest, the press would have said what I said was very nice."

The press availability was a complete train wreck, as Trump went on at length defending his reprehensible remarks and refusing to directly confront racism and his racist support base. Instead, he added the men who created America to his long list of people who have been smeared in defense of his immense ego.

It was a low point for the country, and Trump does not believe anything was wrong with it.