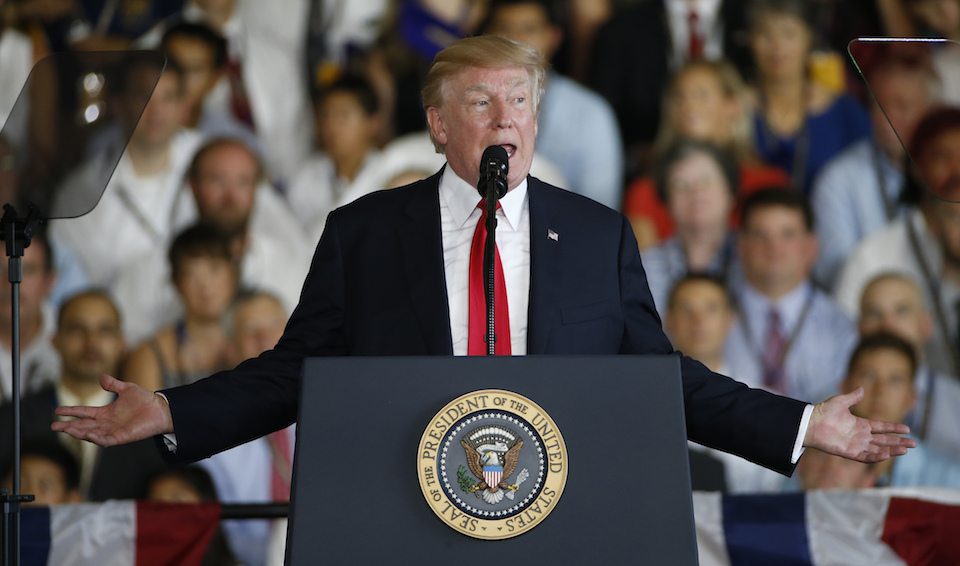 While ostensibly commissioning a new naval warship, Donald Trump couldn't help but plead for political support from the audience, as his presidency sinks like a stone.

Donald Trump may have gotten a lot of use out of the "I'm not a politician" line, but at the ceremony Saturday for a new naval warship, he sure acted like a politician.

While speaking to United States Navy service members and guests, prior to the commissioning of the USS Gerald R. Ford, Trump praised the ship in typical Trump fashion.

Calling it "the greatest ship anywhere in the world," Trump extolled "this wonderful, beautiful, but very, very powerful" ship which would cause "our enemies [to] shake with fear."

"We will win, win, win. We will never lose. We will win," continued his profound remarks.

Trump also did take time to praise the men and women in uniform before him, as well as former President Ford and his wife.

But of course, he could not resist an opportunity to lash out at the previous administration, to put himself forth as some kind of savior, and to demand political support for his disastrous causes.

He railed against the budget sequester from 2013 — for which he could lay blame on his own party, though of course he only referred to "our government" as being at fault — declaring, to members of our military, that "It's been a very, very bad period of time for our military."

He then referenced his proposed budget, nagging at Congress to "do its job" and pass it — a budget that callously targets veterans, would hobble counterterrorism efforts, and would, in fact, "kill a lot of people."

Slipping bizarrely into third person, he pointedly stated of his promised funding increases, "President Trump, I will tell you, you will get it."

But then he got even stranger, exhorting the audience to call their elected officials and offer support for his budget — oh, and also, ask them to pass their health care repeal bill that is a daily increasing disaster.

For years, our government has subjected the military to unpredictable funding and a devastating defense sequester — you remember that, sequester, not good. This has led to deferred maintenance, a lack of investment in new equipment and technology, and a shortfall in military readiness. In other words, it's been a very, very bad period of time for our military.

That is why we reached a deal to secure an additional $20 billion for defense this year, and it is going up. And why I asked Congress for another $54 billion for next year. Now we need Congress to do its job and pass the budget that provides for higher, stable, and predictable funding levels for our military needs that our fighting men and women deserve. And you will get, believe me. President Trump, I will tell you, you will get it. Don't worry about it. But I don't mind getting a little hand, so call that congressman and call that senator and make sure you get it. [applause] And by the way, you can also call those senators to make sure you get health care.

That Trump could, and would, take a pleasant and ceremonial occasion such as this and turn it nearly into a stump speech is odious. And it goes to show that the "not a politician" sheen wears off quickly once one occupies the White House.

And pleading for support for the failures that are his budget and the GOP health care bill makes the downward spiral in which his presidency is foundering even more obvious.

As of the recent six-month mark of his time in office, Trump had the lowest approval ratings of any president going back through the entire 70 years of modern polling. In the growing shadow of the Russia scandal, he has been avoiding the press, spending his time golfing — golfing a lot — and babbling on Twitter.

And now, instead of giving a nice ceremonial speech and leaving politics at the gangway, Trump could not resist trying to make his predecessor look bad and begging for the audience to help make himself look better.