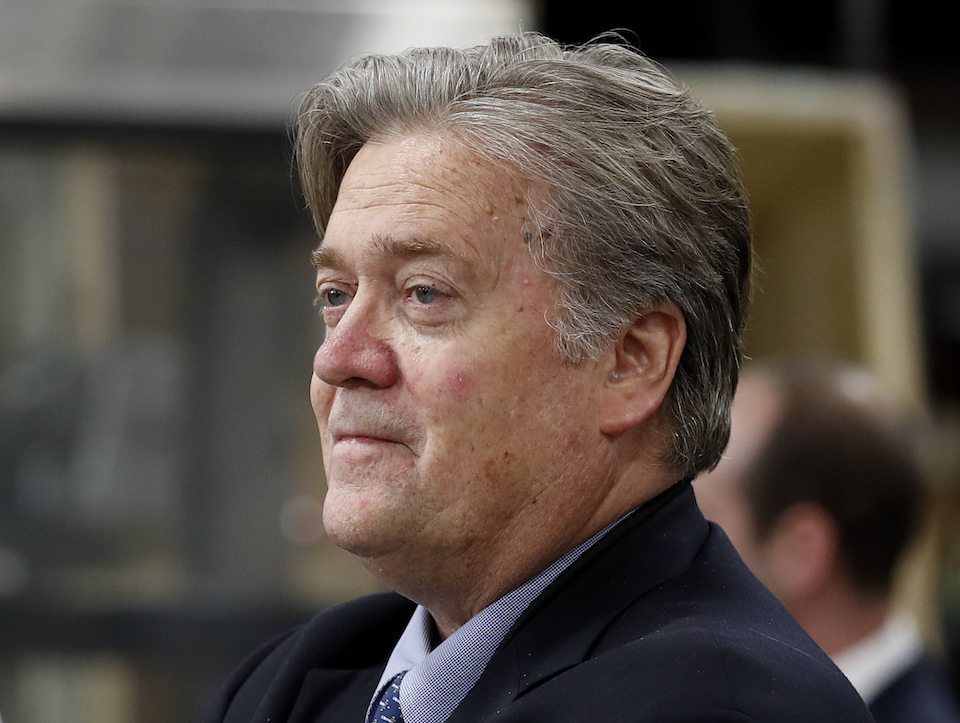 Steve Bannon just told The New York Times that China is like Nazi Germany. Flown over to give a speech to Chinese investors, Bannon insisted there's plenty of affinity between the U.S. and China.

In a speech on Monday in Hong Kong that was barred to reporters, Steve Bannon delivered his first address since leaving Donald Trump’s White House, and he gave it to a group of Chinese investors. And guess what happened behind closed doors amidst a sea of friendly bankers. The hard-charging Bannon, who has publicly berated China as America’s looming enemy, went completely soft.

Instead of challenging China, Bannon touted its innovation, saying China's "way of running their economic system is quite brilliant." He announced, "Trump doesn't respect anyone more than the President of China," Xi Jinping, and added, “There is a lot of affinity between China and the U.S."

Trump's former strategist also spent plenty of time cheerleading Trump and honoring him as some kind of conquering hero: Bannon’s suddenly flowery commentary about China bore no resemblance to the anti-China rhetoric Bannon unfurls while in the United States.

“A hundred years from now, this is what they’ll remember — what we did to confront China on its rise to world domination,” the blustering Bannon told The New York Times, days before his trip to China. “China right now is Germany in 1930. It’s on the cusp. It could go one way or the other. The younger generation is so patriotic, almost ultranationalistic.”

And right before leaving the White House in August, Bannon told The American Prospect magazine that the U.S. is at "economic war with China.”

Bannon addressed the investor conference hosted by CLSA, a Hong Kong brokerage firm that is owned by a politically connected Chinese investment bank, Citic Securities. The address came after he dined with a smaller group of hedge fund managers.

CLSA would not say whether it paid Bannon for his appearance, according to the Times. But a CLSA spokesperson, in explaining why Bannon’s speech was deemed off-limit to the press, told the Daily Mail, “It's our event, we pay the speakers, and we decide these things.”

Either way, it’s obvious that Bannon traveling half way around the world to address a ballroom of bankers means that he got paid handsomely for his speech, a speech in which he completely tossed out his anti-China rhetoric and instead cozied up to those in power.