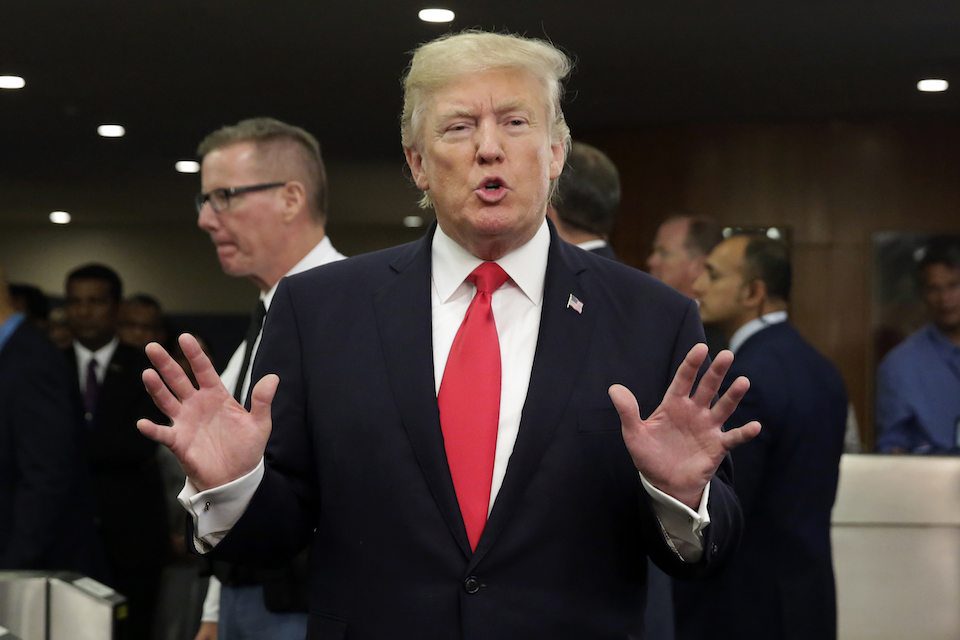 Trump again is using the presidency to promote his private real estate holdings, this time while heading a meeting at the United Nations.

Donald Trump used a United Nations meeting to once again highlight his habit of using the presidency for personal profit.

Chairing a United Nations meeting on "Management, Security, and Development," Trump launched into his opening remarks, sounding more like a salesman than the leader of the free world addressing a global audience.

Once again exhibiting his gigantic ego in front of the entire planet, Trump patted himself on the back for his decision to build Trump World Tower across the street from the United Nation's headquarters. Several condos are currently available for sale there, ranging from just under a million dollars to $10.5 million.

Sitting next to U.N. Ambassador Nikki Haley, Trump told the room of international dignitaries, "I actually saw great potential right across the street," and bragged that the property "turned out to be such a successful project."

HALEY: Donald Trump has a business man's eye for seeing potential. And he sees great potential, not just in this reform movement, but in the United Nations itself.

TRUMP: I actually saw great potential right across the street, to be honest with you, but it was only for the reason that the United Nations was here that that turned out to be such a successful project.

Since obtaining the presidency, Trump has relentlessly used the office to highlight his various holdings and properties. In doing so, he has been able to use taxpayer dollars to fund a multi-million-dollar advertising campaign for himself.

Trump has refused to put his holdings in a blind trust or divest from them. Instead, his sons Eric and Donald Jr. run the Trump Organization while keeping their father regularly informed of the finances. Trump has every incentive to use the presidency to continue to flog his holdings, as the money they generate during his time in the White House goes right into his pockets.

In addition to jetting on Air Force One to his golf course in New Jersey and the Mar-a-Lago resort in Florida like something out of an infomercial, Trump also has the Trump International Hotel just a few blocks from the White House. That hotel has increased its rates to cash in on the influence peddlers and international diplomats who are booking rooms at the property with an eye towards influencing Trump.

For Trump, the United Nations is not a venue for weighty issues like war and peace to be hashed out, but just another venue for him to sign up new condo residents to line his pockets.