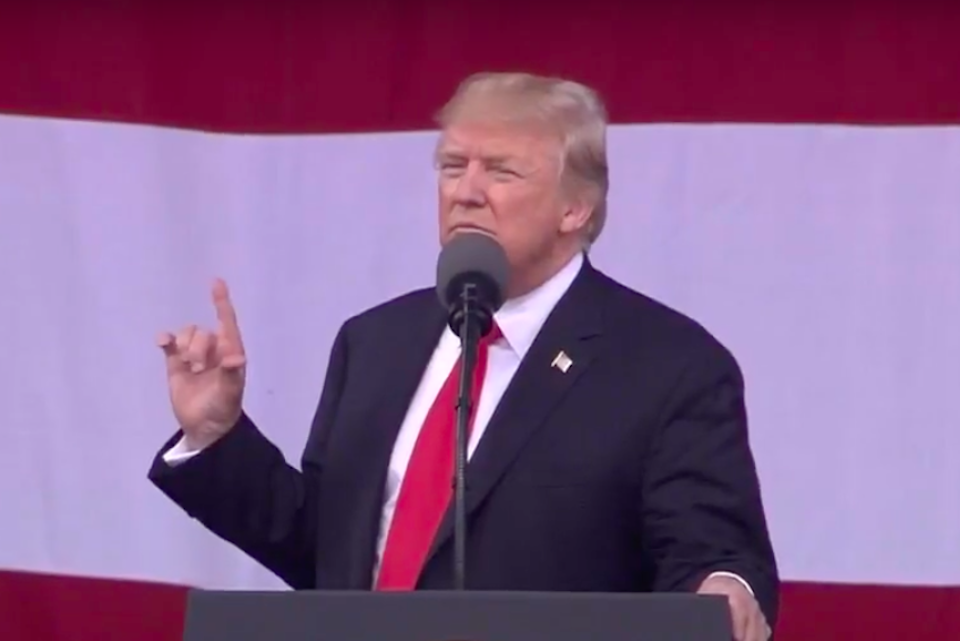 Even in front of Boy Scouts, Donald Trump couldn't help but be his usual despicable self, giving an oddly political and unseemly speech at the National Boy Scout Jamboree.

Donald Trump cannot resist any chance to push his political views or to make grossly inappropriate statements, no matter the situation.

At a recent commissioning ceremony for a new naval warship, he made sure to talk up his proposed budget and his party's health care repeal bill, going so far as to plead with the naval officers and guests in the audience for political support.

And Monday, speaking to the Boy Scouts of America at their National Boy Scout Jamboree, Trump again went way off-script — or at least, off what the script would be for nearly anyone else in his position.

Despite the fact that he insisted he'd do otherwise — telling the young people in the audience, "Who the hell wants to speak about politics when I'm in front of the Boy Scouts — Trump just couldn't say no to the opportunity to give his version of a stump speech.

He railed against "fake news" and the "dishonest people" in the media. He encouraged booing of Hillary Clinton and former President Barack Obama, snidely noting that Obama never attended a jamboree during his presidency. Obama, who was himself involved in scouting as a child, cited his disagreement with the Scouts' anti-LGBTQ policies when declining to attend.

He whined about deserving "more loyalty." Perhaps his hurt feelings were soothed when the crowd ominously chanted "We love Trump!"

He gave a throughly strange and lengthy account of meeting a developer at a cocktail party, where he said the "hottest people" were in attendance. And he offered some transparent innuendo when declining to provide details of a friend's exploits on his yacht, telling the kids, "You're Boy Scouts, but you know life. You know life."

And in advance of the Senate's muddled plans to vote on health care repeal, Trump just had to go off on a tangent there, too.

He gave a shout-out to Health and Human Services Secretary Tom Price, who "still lives the Scout oath, helping to keep millions of Americans strong and healthy."

"And hopefully, he's going to get the votes tomorrow to start our path toward killing this horrible thing known as Obamacare," Trump bizarrely ranted at the children in front of him — though the crowd dutifully responded by chanting, "USA! USA!"

Trump goes on about health care to HHS Sec. Tom Price during the Boy Scouts Jamboree: "Are you going to get the votes? You better get them." pic.twitter.com/Y1DD1GwcKX

Trump has often insisted that he is not a politician. And this wildly inappropriate speech, to a group of Boy Scouts, sure proved that fact.