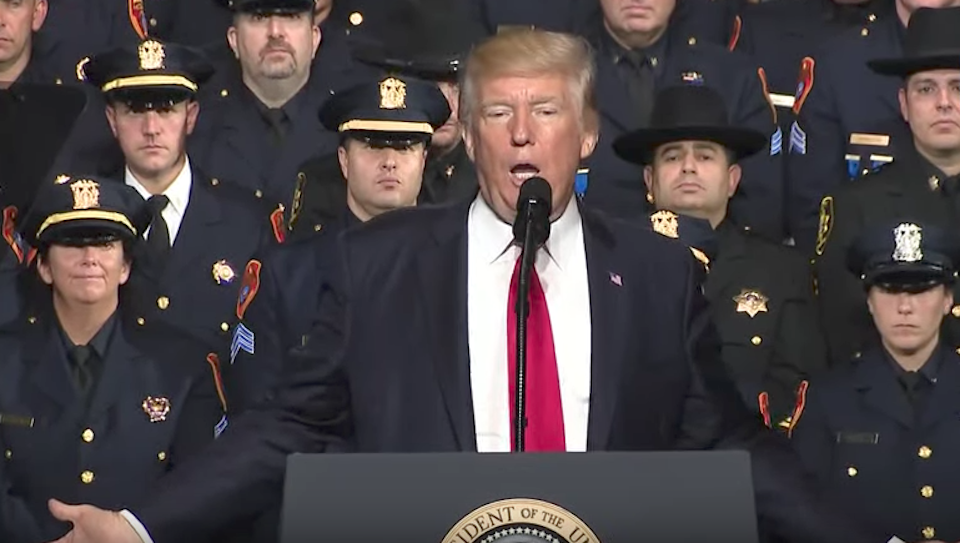 Donald Trump gave an explicit endorsement of police brutality, while speaking to an audience of federal, state, and local law enforcement.

Trump told the police in attendance, "When you see these thugs being thrown into the back of a paddy wagon, you just see them thrown in rough, I said, 'Please don't be too nice.'"

He instructed the officers to "take the hand away" when putting suspects in a police vehicle, referring to the traditional practice of making sure suspects' heads don't hit against the side of the car.

TRUMP: When you see these towns, and when you see these thugs being thrown into the back of a paddy wagon, you just see them thrown in, rough, I said, "Please don't be too nice." Like when you guys put somebody in the car and you're protecting their head, you know, the way you put their hand over. Like, don't hit their head, and they've just killed somebody. Don't hit their head. I said, "You can take the hand away, OK?"

Trump has a history of promoting violence, despite the outright lie from White House press secretary Sarah Huckabee Sanders in June that Trump "in no way, form, or fashion has ever promoted or encouraged violence of any kind."

During the presidential campaign, he told his supporters he'd like to punch a protester in the face, and lamented about the "good old days" where protesters would be "carried out on a stretcher." He even said his team would look into paying the legal fees of a Trump supporter who assaulted a protester.

Now Trump is ratcheting up that rhetoric to give law enforcement officers the blessing of his office to attack people and break the law while in the field. It isn't normal, or presidential.

The episode was yet another instance of Trump indulging in his brutal authoritarian beliefs in public, endorsing behavior well outside of American presidential behavior and decency.