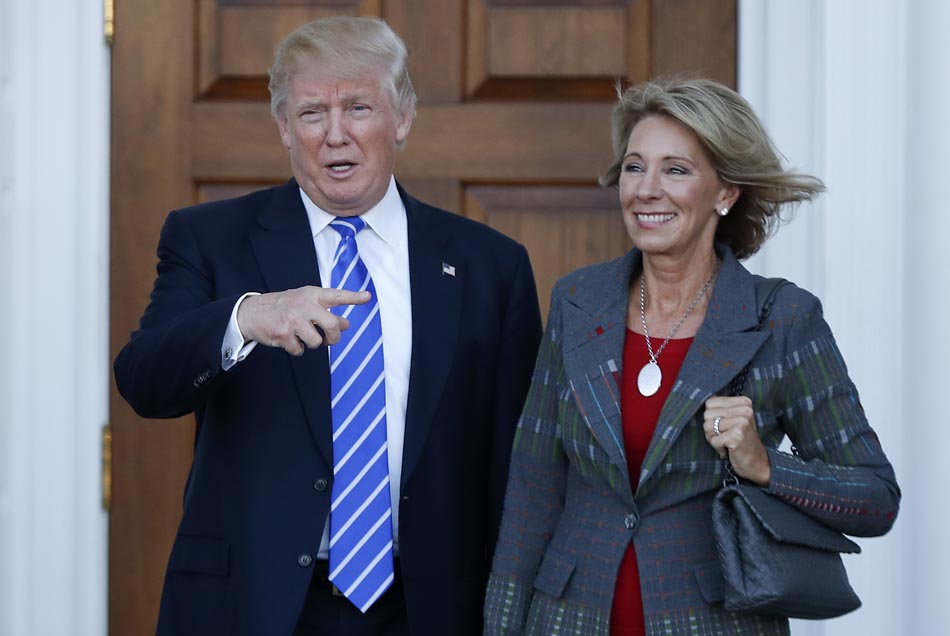 President-elect Donald Trump has tapped Betsy DeVos to serve as his Secretary of Education. A billionaire school "reformer," DeVos is an advocate for charter schools and school vouchers — a perfect partner for Trump, who has said he wants to break up the "government-run education monopoly."

Donald Trump's selection of Betsy DeVos for Secretary of Education is not an encouraging sign for anyone who values equal access to education. DeVos is a champion and funder of charter schools and school vouchers.

Like many "educational choice" advocates, Trump and DeVos insist that privatizing education will improve education. But all evidence points to the absolute contrary.

Over the last decade, Milwaukee has been a laboratory for private school vouchers, and the results have been poor: numerous studies have shown that vouchers failed to make any difference in student performance. Just like in Washington, DC and Cleveland, private school vouchers in Milwaukee failed to produce the gains their supporters promised...with students in the Milwaukee voucher program actually performing worse than comparable public school students.

Faced with these results, DeVos' American Federation for Children decided to honor Wisconsin Governor Scott Walker for his "success" in education reform.

If it sounds like "success" for privatization advocates is harming the public educational system, it is because that is precisely the goal, if generally not as explicitly stated as Trump's desire to quash the "education monopoly."

Access to free public education is imperative — and reforms to our unequal system are needed, but for reasons having to do with the way public education is typically funded (e.g. via property taxes), creating uneven funding rooted in wealth disparities.

Privatization does not solve this problem; in fact, it more deeply entrenches the issue for many families. And it further exacerbates racial segregation and the exploitation of poor communities of color.

“Research has shown us that these charter schools are arising in poor communities where the students are African-American, Hispanic, Southeast Asian, and one of the things research has shown is the expansion of charters schools mirrors predatory lending,” [Dr. Joan Evelyn Duvall-Flynn, president of the Pennsylvania Conference of NAACP Branches and an educator, told Atlanta Black Star]. “When the tax base is low, less money is going to the public,” she explained.

Charter schools are also enrolling fewer disabled students, and many have instituted enrollment guidelines that may discourage applications from immigrant students. The quality of charter schools can vary wildly, and that is of particular concern given that, among many other problems, charter schools have led to public school closings.

Selecting DeVos to run the Department of Education was a dreadful choice which will have serious negative consequences for millions of families. And that was precisely the point.