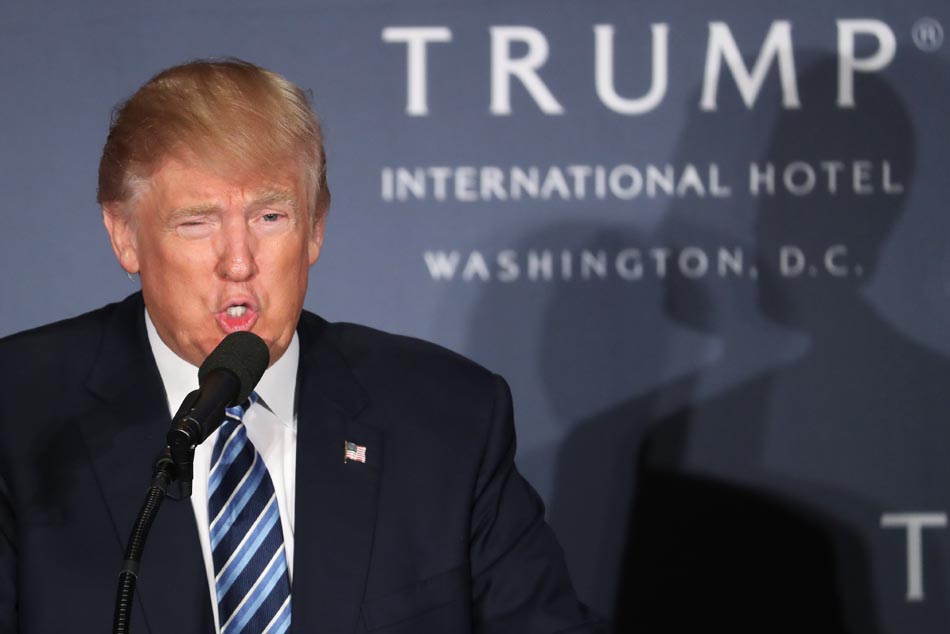 Trump's D.C. hotel is charging a premium over other similar hotels in the city, a result of the establishment marketing itself to foreign entities and Republicans who want to influence Trump himself.

Like most luxury hotels in Washington, D.C., the Trump International offers its guests nice rooms, spa services, a steak house, and other amenities associated with high end hotel service. But for about an extra $150 a night, the hotel goes a step beyond, allowing guests to peddle influence with Donald Trump, who currently inhabits the Oval Office.

Even better: Those extra dollars are going into Trump's personal bank account.

The Washington Post reports that Trump International first filed documents with the federal government projecting an operating loss of $2.1 million during the first four months of 2017. But after Trump won the election, those projections did not take into account the idea that the hotel would be turned into an unseemly hub where access to the presidency can be purchased for just a few extra dollars a night.

Now, instead of a loss, Trump International turned a $1.97 million profit, which is "a 192 percent improvement over what the Trump family planned to make when the company opened the hotel in the fall."

Guests have paid the hotel an average of $652.98 a night to stay at the hotel, which since the election has marketed itself toward foreign entities and groups affiliated with the Republican Party — in other words, everyone who wants to influence Trump.

The nightly rate is well above other similar luxury hotels in the region like the Hay-Adams, Four Seasons, and Willard, which charge their patrons an average of $495 a night.

Spending on food and drink at the hotel is at $8.7 million, 37.2 percent above what they predicted it would be. The most notable under-performer on the Trump property is the Spa by Ivanka Trump, which has failed to meet expectations, another disappointment from his most prominent daughter.

Not only are guests paying a premium to get close to Trump, but because he has broken presidential tradition and refused to divest from his businesses, he is still directly profiting from the hotel as it trades in on his presidency to attract clients and increase rates.

Trump made a great show of putting his sons Eric and Donald Jr. in charge, but they have already admitted that they continue to update him on the finances, as if he were still in control.

Nothing is preventing Trump from giving them marching orders for how to proceed in conducting business, which has prompted lawsuits from members of Congress demanding a stop to the corrupt practice.

Alongside Trump's use of taxpayer-financed travel to advertise his properties, the emergence of the D.C. hotel as a corruption hub further cements his reputation for ethical rot.