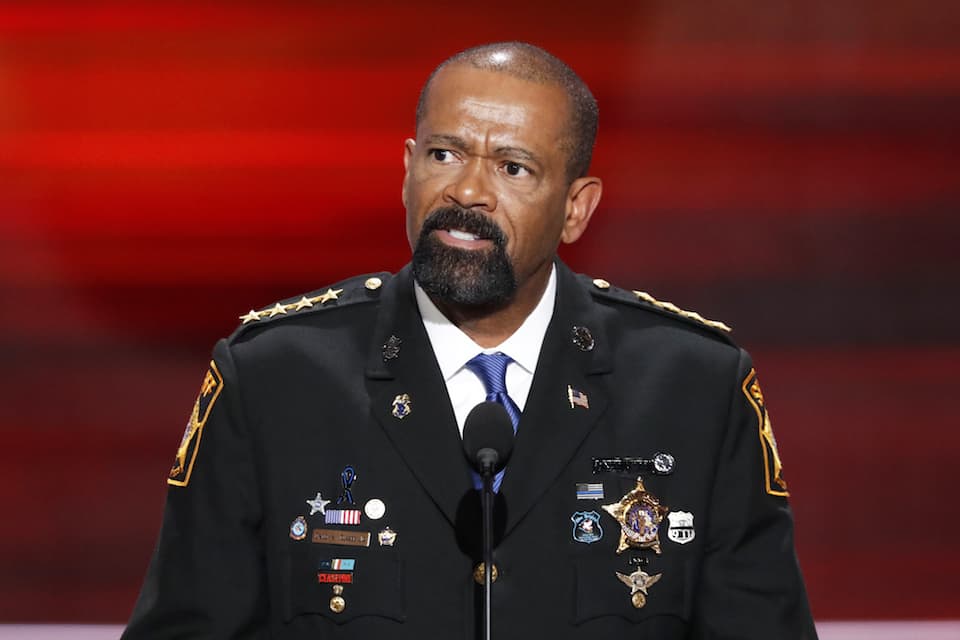 Sheriff David Clarke, infamous for his inhumane and even deadly abuse of prisoners — and who also has ties to the Russian government — is reportedly being eyed by Donald Trump for a position in the Department of Homeland Security.

Bypassing the need for Senate confirmation, Milwaukee County Sheriff David Clarke has reportedly accepted a "secretarial appointment" to serve as assistant secretary for the Department of Homeland Security.

Clarke is most infamous for running a jail in which a mentally vulnerable man died of "profound dehydration" after the water in his cell was turned off for days. The death was ruled a homicide by authorities, but no charges were pressed. Three other people also died in the jail during nine month period in 2016, including an infant.

He has also been an outspoken opponent of civil rights — in particular the right to participate in demonstrations — and has characterized protesters as "primitive" and "subhuman." Clarke came out as a strong supporter for Donald Trump during the 2016 presidential campaign and spoke at the Republican National Convention.

And, though a DHS spokesperson has noted that "no such announcement" has been formally made, if and when it is, Clarke will become yet another person appointed to a government role by Trump with questionable ties to the Russian government.

On December 10, 2015 — the same night of the Russia Today gala where Michael Flynn was paid to speak and sat at a table at the right hand of Russian President Vladimir Putin — Clarke was also in Moscow meeting with people in the Kremlin:

Red Square near the Kremlin with a Russian officer. Met earlier with Russian Foreign Minister who spoke on Mid East. pic.twitter.com/ZcDdQB65lb

As part of a delegation from the National Rifle Association, Clarke traveled to Russia to meet with a Putin deputy,  Dmitry Rogozin. Rogozin heads the Russian defense industry and was, and remains, under sanction by the United States. He is known to be a hardliner who is opposed to U.S. power and has advocated for "first strike" capability via cyber warfare in the event of a conflict between Russia and another nation [via Google translate]:

In the event of a conflict with any state, a possible first attack is carried out through information networks, during which critical state infrastructure objects are destroyed, the system of political and military control is disrupted, and machine tools with electric brakes based on the imported electronic component base are shut down. When the state-victim of aggression becomes practically paralyzed, classical military means are struck.

According to Clarke's municipal financial declaration, his trip to Moscow was paid for in part by a little known group called "The Right to Bear Arms" that was founded by Maria Butina, a Russian national, former Russian central bank staffer, and apparent liaison between the American right-wing and the highest levels of the Russian government.

With the appointment of Clarke, concerns about Trump's disregard for human rights and his relationship with the Russian government will only increase. Either way, the need for the nonpartisan independent special prosecutor to investigate Trump's possible collusion with Russia is now greater than ever.