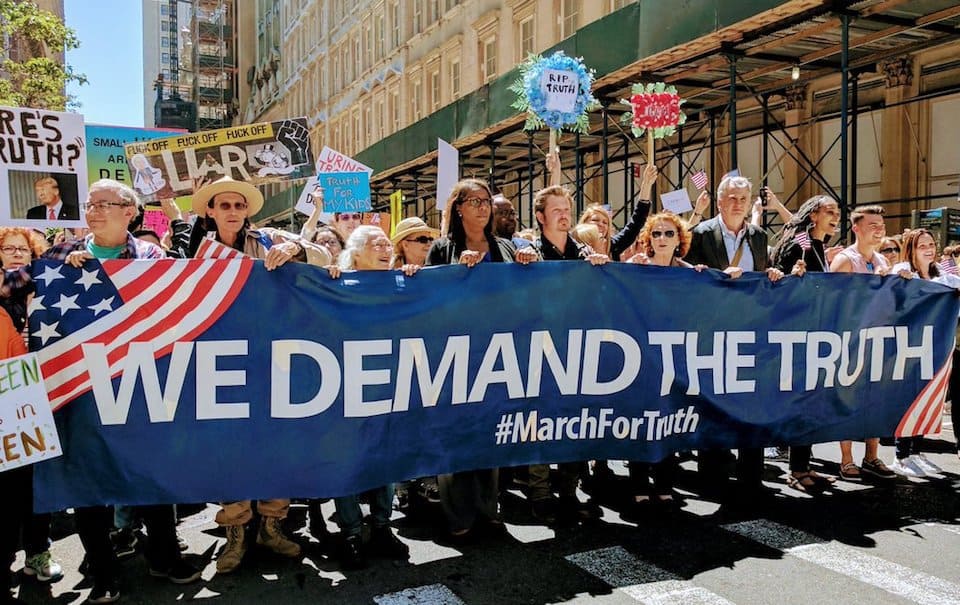 Twitter/March for Truth
Get The American Independent in your inbox

The American people will not be silent until we get the answers we deserve to questions about Donald Trump's ties to Russia.

From the coasts to the heartland, Americans demonstrated across the nation under the banner of "March for Truth" to demand answers about Donald Trump's possible collusion with the Russian government.

Marches took place in 44 states and more than 150 locations across the Unites States and abroad, and interest was so great that the location search function on the organization's website crashed in response to hundreds of thousands of searches the 48 hours prior to Saturday:

In New York City, thousands marched to demand truth and accountability, including celebrities like Hamilton's Javier Muñoz and House of Cards creator Beau Willimon, a Jewish veteran of World War II, expert on authoritarian regimes and author Timothy Snyder, and many elected officials.

Democratic Rep. Jerry Nadler condemned Republican members of Congress for "consistently choosing Trump over truth" and asserted, "We will not allow Trump's lies and Republican obstruction to destroy our democracy." His Democratic colleague Rep. Nydia Velazquez told the crowd, "Russia underestimated the power of the American people."

In Washington, DC, crowds braved early showers to gather on the National Mall in front of the Washington Monument and chanted, "Truth, truth, truth!" and formed out the demand "Investigate Trump" with their bodies:

Referring to the pathetically small turnout at the gathering Donald Trump requested his supporters undertake across the street from the White House, former speechwriter for President Barack Obama Jon Lovett joked with the D.C. crowd, "I just came from the White House. The 'Pittsburgh not Paris' people did not come out in the numbers they were hoping for."

We cannot allow the voices of hate to overpower those of love! -@lsarsour #MarchForTruth #WashingtonDC pic.twitter.com/2QkGlxaVdA

While on her way to participate in a march, one woman noticed a relevant billboard in rural Virginia that says "Interstate 95 – Fastest Way to  Moscow." Interstate 95 is the main north/south highway leading into and out of the nation's capital:

On the road to #MarchforTruth , I see this in Ladysmith VA pic.twitter.com/rkxNFHcjgn

Defying the GOP claim that Middle America does not care about Russia, protesters showed up with a figure of Donald Trump in prison stripes made out of real Cheetos and full-size American flags in tow in St. Louis, Missouri:

During her remarks in St. Louis, author and authoritarian expert Sarah Kendzior reminded those gathered, "The power of lies in an authoritarian regime is to make it big, obvious, and make people feel powerless to do anything about it."

In the small town of Bloomington, New Jersey, Democratic Rep. Bill Pascrell quoted the Bible and told attendees, "Each of us has a responsibility and obligation to do the best we can to preserve these Democratic values we hold so precious ... It is the people of this nation that will lead us from this dangerous time."

The GOP can and likely will continue to claim that most Americans are not concerned about the ties between Trump's administration and the Russian government.

Nonetheless, in both polls and protests, Americans are making their voices heard and calling this out for the lie that it is. The people of this country will not be silent until we obtain the answers we deserve.