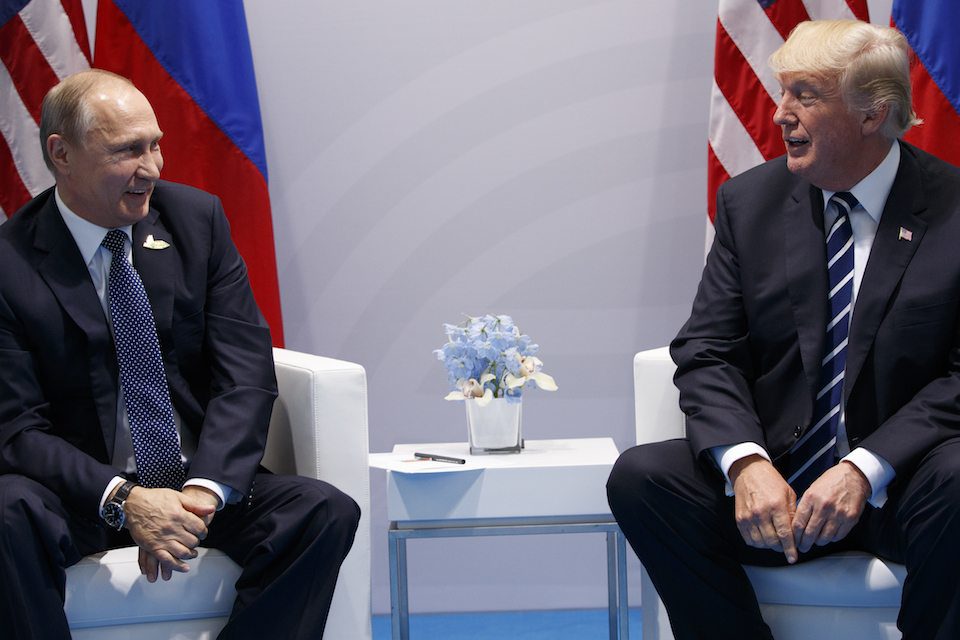 Donald Trump thanked Russia for expelling American diplomats in retaliation for sanctions, again siding with a foreign power over the United States.

Donald Trump stabbed American diplomats in the back by thanking Russian President Vladimir Putin for expelling them from his country. Given the choice of backing those who serve and represent America abroad, Trump sided with a hostile power.

Asked about Putin's decision to expel Americans, Trump told reporters, "I want to thank him. We're trying to trim down on payroll. Greatly appreciate that."

It is Trump's first comment on the expulsion, after remaining silent for more than a week, even though removing so many people – 755 – is unprecedented in the history of relations between the two nations.

While Trump absurdly claimed Thursday that perhaps his reckless threat of "fire and fury" against North Korea "wasn't tough enough" — something no one believes — his gratitude to Russia certainly is not tough enough. In fact, his flippant comment might have been inspired by internet trolls on Twitter complaining about the cost of our diplomats.

Russia expelled American diplomats and support personnel in retaliation for the passage of the bill imposing sanctions on that nation for interfering in the 2016 presidential election. Russia enlisted hackers to break into the computers of the Democratic National Committee, and those emails were strategically leaked to hurt Hillary Clinton.

Trump has continued to claim that it is unclear who engaged in the cyber-espionage against the United States, even as intelligence agencies reporting to him have clearly said it was Russia.

In the same time frame, top leaders of the Trump campaign — including his son Donald Trump Jr.; his son-in-law, Jared Kushner; and campaign chairman Paul Manafort — were meeting with Russian operatives to dig up dirt on Hillary Clinton.

Trump is currently under investigation by the FBI, special counsel Robert Mueller, and multiple congressional committees who are investigating the relationship between his campaign and Russia.

Trump argued strenuously against the Russia sanctions bill and tried to get Congress to soften the legislation. Even after he signed it, Trump released statements complaining about how the bill imposed sanctions without the office of the presidency being able to control them. Media outlets were banned from recording the bill signing.

At every turn, Trump has rejected America — its intelligence agents, its diplomats — and embraced Russia. That he has thanked Russia for punishing the United States, however, is a new low, even for him.