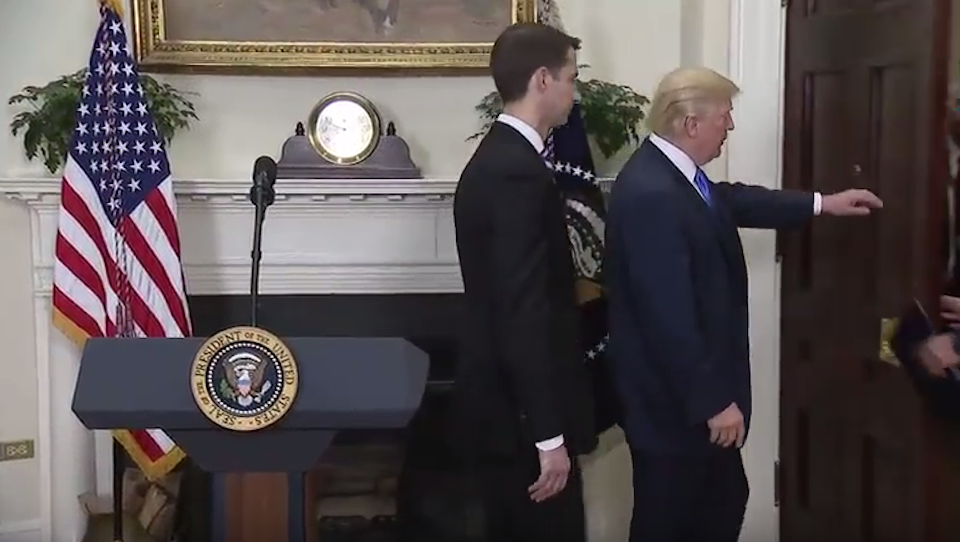 Donald Trump made a hasty retreat from the room after reporters asked him about his criticism of the Russia sanctions bill he just signed.

Donald Trump hurried out of the room rather than face reporters' questions about the Russia sanctions bill he was forced to sign after intense pressure from the American people and a nearly unanimous Congress.

Concluding an event in which he promoted harsh anti-immigrant legislation being proposed in the Senate by his Republican Party allies, Trump was tight-lipped as he was pressed on the legislation.

Trump would not acknowledge the questions and turned his head away as a reporter asked him why he had released a signing statement referring to the bill as "seriously flawed."

Trump barred media from covering his signature on the bill, a departure from his past behavior of signing legislation — or even just letters — with elaborate ceremonies in full view of cameras, sometimes posing with his signature.

It has been 167 days since Trump held a formal, solo presidential news conference to answer questions from the media on issues like the Russia sanctions bill and his failed attempt to repeal health care reform. He has only held one such event over the entire course of his presidency.

While avoiding the press, Trump has made time for self-serving campaign rallies with his dwindling base of die-hard fans. The day after signing the Russia bill, he is holding a campaign a rally in West Virginia at the Big Sandy Superstore in Huntington. The state, where he won handily by 32 percent, is the very definition of a "safe space" after his repeated public humiliation.