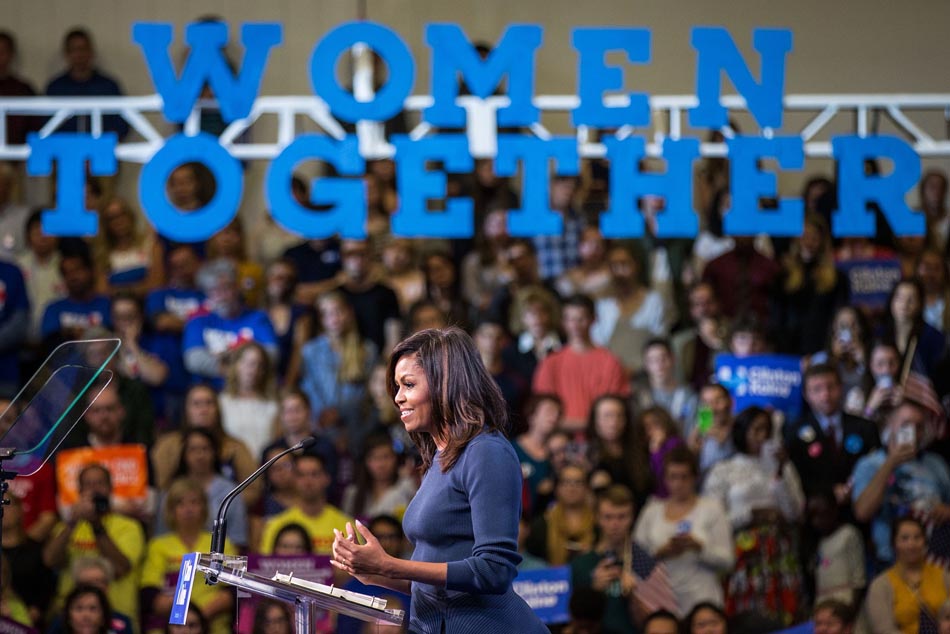 Not content to restrict his sexist rhetoric to Hillary Clinton, Donald Trump has now unleashed a mouthful of gender policing at First Lady Michelle Obama. This will not end well. For him.

We are all too painfully aware of Donald Trump's disrespect for women. And he really doesn't respect women who challenge him. And Michelle Obama has been out front in challenging Trump, particularly on the subject of his contempt for women. So off he went.

Trump comments on FLOTUS as surrogate for Clinton: "His wife, all she wants to do is campaign..." pic.twitter.com/9rp9SeKX1C

They're babies! We have a president — all he wants to do is campaign. His wife — all she wants to do is campaign. And I see how much his wife likes Hillary, but wasn't she the one that originally started the statement "if you can't take care of your home," right? "You can't take care of the White House or the country." Where's that? I don't hear that. I don't hear that. She's the one that started it. I said: We can't say that — it's too vicious. Can you believe it? I said that. We can't say it. They said, "Well, Michelle Obama said it." I said, "She did?!" Now she said that, but we don't hear about that.

For a very long time, the rightwing media has asserted that Michelle Obama's 2008 campaign quote, "If you can't run your own house, you certainly can't run the White House," was a veiled attack on Hillary Clinton.

But that is a deeply dishonest misrepresentation of what Obama was saying.

The conclusion she was directing those words at Clinton, her husband's then-rival for the Democratic nomination, is based on ripping those words from their original context and banking on widespread hatred of Clinton.

What Obama was actually talking about was how they planned to keep their daughters grounded, if Barack Obama was elected.

[O]ne of the most important things that we need to know about the next president of the United States is, is he somebody that shares our values? Is he somebody that respects family? Is a good and decent person? So our view was that, if you can't run your own house, you certainly can't run the White House. So, so we've adjusted our schedules to make sure that our girls are first, so while he's traveling around, I do day trips. That means I get up in the morning, I get the girls ready, I get them off, I go and do trips, I'm home before bedtime. So the girls know that I was gone somewhere, but they don't care. They just know that I was at home to tuck them in at night, and it keeps them grounded, and, and children, the children in our country have to know that they come first. And our girls do and that's why we're doing this. We're in this race for not just our children, but all of our children.

Trump is mischaracterizing the First Lady's eight-year-old words, and in a very particular and pernicious way.

He is attempting to create a rift in what has been seen as a profoundly inspiring political partnership between two of the most prominent and admired women in the nation, who are strongly allied on the subject of women's empowerment and eradicating gender bias.

And who are united in condemning his attitudes and behavior toward women, and united in trying to defeat him.

So he is attempting to drive a wedge between them, and subvert the unified passion so many women across the nation have for the work Michelle Obama and Hillary Clinton are doing together on our behalf.

This is an age-old disruptive strategy used by anti-feminist men, particularly white men who are unnerved by seeing alliances between Black and non-Black feminists.

Trump further suggests that his mischaracterization of Obama's words give him license to personally attack Clinton.

The line stops here. You're not going to get away with it this time. Michelle Obama and Hillary Clinton stand together, and millions of feminist women stand with them.