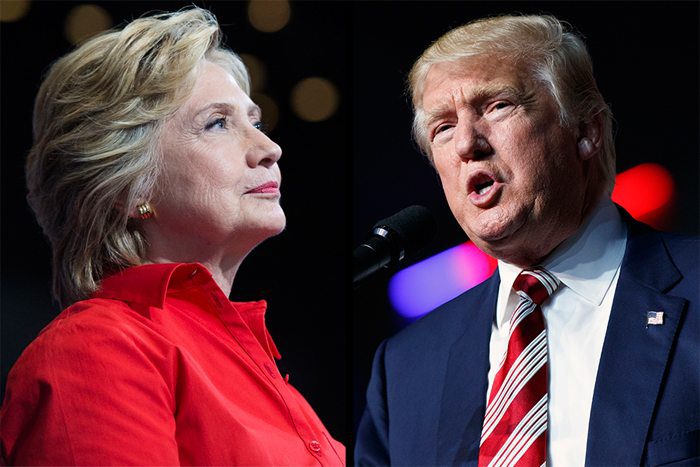 Photos: HFA and AP
Get The American Independent in your inbox

Gender has played — and continues to play — a pivotal role in the 2016 campaign. Not only in the difference in policies between the two candidates, but in how they are building trust (or failing to) with women. The first presidential debate was no exception.

Monday's presidential debate opened with a question about jobs. Hillary Clinton was the first to answer. She spoke about jobs, and then she spoke about equal pay for women. And about paid family leave. And about affordable childcare. Because an economy that works for women includes all of these things, not just a job.

Donald Trump launched into one of his typically grim rants about how America is losing, failing, collapsing. And then he promised to cut taxes, asserting that would create job growth, which is a favorite fairy tale of conservatives, no matter that it has been resoundingly discredited. He didn't mention women at all, nor employment policies that support families.

And so it went.

Trump's most explicit commentary on women last night was an unprompted defense of his sexist and fat-hating attacks on Rosie O'Donnell: "I said very tough things to her, and I think everybody would agree that she deserves it and nobody feels sorry for her."

This outburst followed Clinton's recounting of Trump's appalling treatment of Alicia Machado, a former Miss Universe winner, whose story is featured in a powerful ad in support of Clinton.

This morning: "She gained a massive amount of weight...it was a real problem." pic.twitter.com/0wrISjJe6z

Trump was apparently too busy revisiting his vendetta against O'Donnell to comment on Machado during the debate, but used a morning-after appearance on Fox & Friends to double down:

But, as if to make it abundantly clear, Trump spent the debate repeatedly interrupting Clinton, and his worst moment of the evening came after the debate, when he grabbed the wrist of a female reporter asking him a question about young women who are nervous about voting for him.

The reporter, Alexi McCammond, wrote about the incident, describing what happened and noting: "So Trump never verbally answered my question about how he would respond to women who are nervous to vote for him, but I got the answer I needed."

Such appalling behavior is an escalation of the aggressive, erratic, reactionary temperament he'd displayed throughout the debate, repeatedly barking into the microphone that Clinton was "Wrong!" in between glaring at her with narrowed eyes.

Many women — and certainly some men — watched with anger at seeing the first woman in the nation's history to take the stage in a presidential debate be treated with such contempt. But they also watched with pride and admiration. She was unflappable in the face of Trump's intolerable onslaught of disrespect.

Because she has had to be, in a way many women intimately understand.

Hey straight white guys, if you're amazed that Clinton is keeping her cool right now, remember that women practice it all day, every day.

Faced with an opponent who does not respect women, and certainly does not respect her, Clinton not only had to try to win on the merits, but also had to find a way to be impervious to Trump's disdain, while simultaneously navigating the impossible and often contradictory expectations we have of power-seeking women.

To smile, but not too much. To speak forcefully, but not too forcefully. To look tough, but not too tough. On and on and on. And all the while, not letting the psychological diversion of straddling these expectations undermine her performance; to not even let it be visible at any time that she's conscious of having to present herself.

Who told Hillary Clinton to keep smiling like she’s at her granddaughter’s birthday party?

And all while breaking new ground, and everything it entails to be the women setting the precedent, introducing the nation to the image of a woman standing in a place no woman has stood before. Like dealing with this, for example:

Text from a GOP friend of mine in Congress.

I'm sorry, Congressman, but tonight Hillary is coming across as presidential. #DebateNight pic.twitter.com/DsEEV2FSho

Hillary Clinton has to break a 227-year barrier confronting this kind of disgusting rhetoric.

The double standard is appalling.

At the debate, Trump merely had to stand with her on the stage and not fall over to meet the rock bottom expectations that had been set for him.

And Clinton, as usual, had to be extraordinary and make it look effortless.

It's a ridiculously tall order, and yet: She did it.

Trump spent the evening writing fear across the hearts of millions of American women, with his demeanor and his policies.

Clinton spent the evening blazing a trail with dignity and competence and grace. There are, frankly, not enough ways to express gratitude that she is willing to be the one to take on the monumental task of being first, no less in a battle with a man who would see none of us achieve what she has.