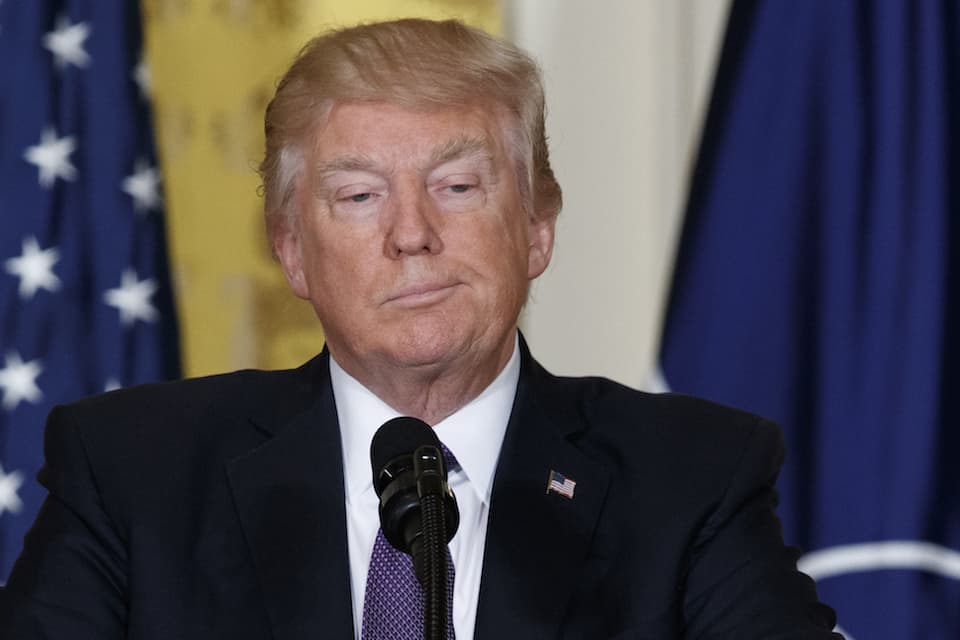 Two weeks after calling the opioid crisis a "national emergency," Donald Trump still hasn't taken any steps to make the declaration official, even as thousands of Americans are dying from opioid addiction every month.

In early August, after Democrats managed to shame him enough to say something, Donald Trump told reporters that the country’s ongoing opioid epidemic was a "national emergency," and promised to take the necessary steps to make the declaration official.

But over two weeks have passed since then, and the Trump administration has yet to take any formal action — including simply completing the necessary paperwork — to declare the opioid crisis a state of emergency.

During an impromptu press conference August 10 at his golf resort in Bedminster, New Jersey, Trump told reporters, "I'm saying officially right now, it is an emergency. It is a national emergency. We're going to spend a lot of time, a lot of effort, and a lot of money on the opioid crisis."

The announcement came just one week after the president’s special commission on the opioid epidemic issued a report in which in which its top recommendation was to officially declare the crisis a national emergency. Doing so would provide states and federal agencies with more resources and options to combat the problem.

For example, declaring an official state of emergency would allow the Trump administration to temporarily waive certain rules and restrictions that make it harder for uninsured people to access addiction treatment.

But declaring a state of emergency requires more than just words — and thus far, the White House has not taken any of the necessary steps to make it official. It’s not even included among other presidential actions on the White House website.

But while Trump isn't doing anything substantive to address the national crisis, some state leaders are stepping up and taking the initiative themselves.

Virginia Democratic Gov. Terry McAuliffe recently announced that his annual "Datathon" will focus on building better data-driven responses to the opioid epidemic. The event will bring together public, private, and non-profit groups to work on improving Virginia's capacity to prepare for and respond to the problem.

But states cannot be left to respond to such a massive and deadly issue on their own; a crisis of this magnitude requires the full force of the federal government.

Drug overdose deaths are at an all-time high, killing more Americans under the age of 50 than anything else. With an estimated 142 Americans dying from drug overdoses every day, "America is enduring a death toll equal to September 11th every three weeks," according to a recent report from Trump’s own task force.

Trump made the opioid epidemic a centerpiece of his campaign, frequently traveling to communities hit hardest by the deadly scourge and pledging to help curb the growing crisis. And voters responded to his promises.

According to several analyses, Trump’s focus on the opioid epidemic helped boost him to victory in key states like Ohio, West Virginia, and Pennsylvania. Counties with the highest rates of opioid overdoses overwhelmingly voted for Trump, meaning that his base includes many of those suffering the most from the opioid crisis.

But one of Trump's main fixations since occupying the Oval Office — the repeal of Obamacare — has been denounced by addiction experts, who call the Republican health care plan a "death sentence."

Like so many other pronouncements from Trump, his statements on the crisis appear to be all talk and no helpful action. His words, however, are unlikely to bring much comfort to those struggling with opioid addiction — nor to the families of the thousands of Americans dying from it every month.