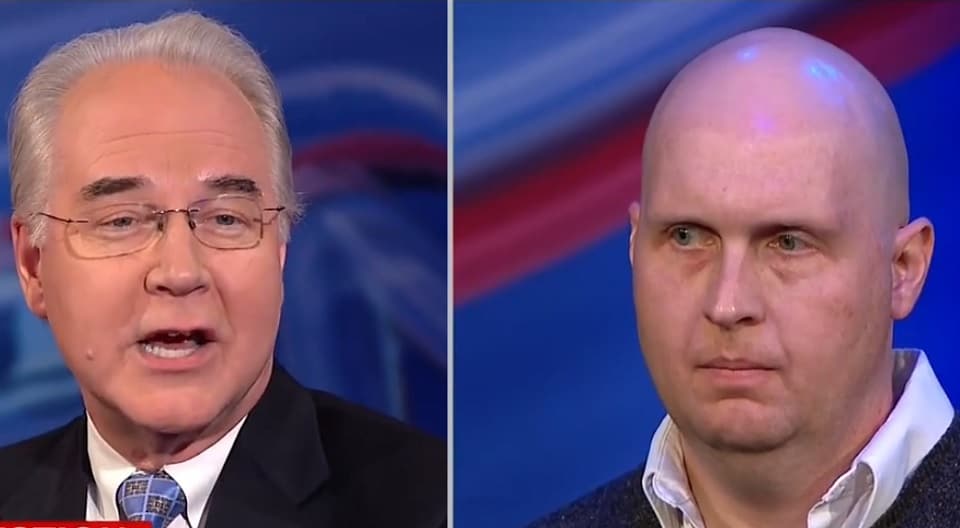 CNN held a town hall meeting with Health and Human Services Secretary Tom Price, where a cancer patient, whose life was saved by the Medicaid expansion in Obamacare, confronted Price with the GOP's plan to kick him off of it in 2020.

Republicans have been having tremendous difficulty selling their plan to repeal Obamacare, particularly when they are confronted by cancer patients who are only alive because of Obamacare's Medicaid expansion.

At a CNN town hall, Donald Trump's Health and Human Services Secretary Tom Price may have delivered the coldest reply to date to people facing a possible death sentence if Obamacare is repealed, then proceeded to lie right to the man's face.

Price began by congratulating the man for surviving cancer, told him that once he is kicked off Medicaid, he could "move to a system that might be much more responsive" (to a cancer patient who makes $11.66 an hour), but finished up with a revealing and icy acknowledgement of the trade-off involved (full transcript here):

KLINE: Yes, Medicaid expansion saved my life and saved me from medical bankruptcy. Now, I earn $11.66 an hour at my retail job. And obviously, I cannot afford to pay for my cancer care out of pocket. My life really depends on having access to my doctors and medical care.

PRICE: Brian, thanks for that question. And thank goodness that things are going well from your health care standpoint...

And so what we want to do is, one, reform the Medicaid system, make certain that individuals who are currently on Medicaid or on the expansion either are able to retain that, or move to a system that might be much more responsive to them through a series of advanceable refundable credits, a way to get coverage that they choose for themselves and for their family, not that the government forces on them.

So, thanks. It's wonderful that you have received the care that you've received. And it's because of the incredible innovations and great doctors across this land. But that's not necessarily true for everybody.

What Price seems to be saying is that Kline will have to take his chances, without the Medicaid expansion that saved his life, because people who are not sick now need to pay less for insurance that does not cover as much.

A dissatisfied Kline was given the chance to follow up with Price, and was lied to for his trouble. Price explained that while Medicaid had worked fine for Kline, Republicans want to "strengthen" it by kicking people like Brian off of it, and cutting nearly a trillion dollars in funding from it:

BLITZER: Let me ask you, first of all, do you think the secretary answered your question?

KLINE: Unfortunately, no. I don't believe he did answer my question, Wolf, because, like, according to my knowledge, the American Health Care Act under the Republican leadership bill is going to sunset Medicaid, I believe, in 2020. Now, of course, you have a faction of conservative Republicans who want to sunset it even sooner, so this is — this is not going to help me.

PRICE: Well, again, Brian, it's important to appreciate that the program itself — it may have worked extremely well for you, and that's wonderful, and we need to keep those aspects of the program in place. But the fact of the matter is that the program is — is having extreme difficulty providing the care that's needed for all of the individuals on it.

So what we want to do is to strengthen that program, to make it so that it's more responsive for patients and allows physicians and other individuals who are providing care for patients to be able to do so in a way that makes sense as opposed to one that may make it more difficult for individuals to receive the care that they need.

None of what Price is saying makes sense if you listen to it as a human being: He is telling a man who is about to be kicked off of the Medicaid expansion that kicking people off Medicaid and cutting its funding will actually "strengthen" the program. And his reasoning, cloaked as it is in smiles and well-wishes, is that people like Brian are what is weakening Medicaid and causing the program to have "extreme difficulty providing the care that's needed for all of the individuals on it."

These cancer patients will either have to become poor enough to qualify for the newly-slashed Medicaid, or take their chances in emergency rooms. Voters are not buying it, and performances like Price's will serve only to solidify the massive resistance to this unconscionable bill.