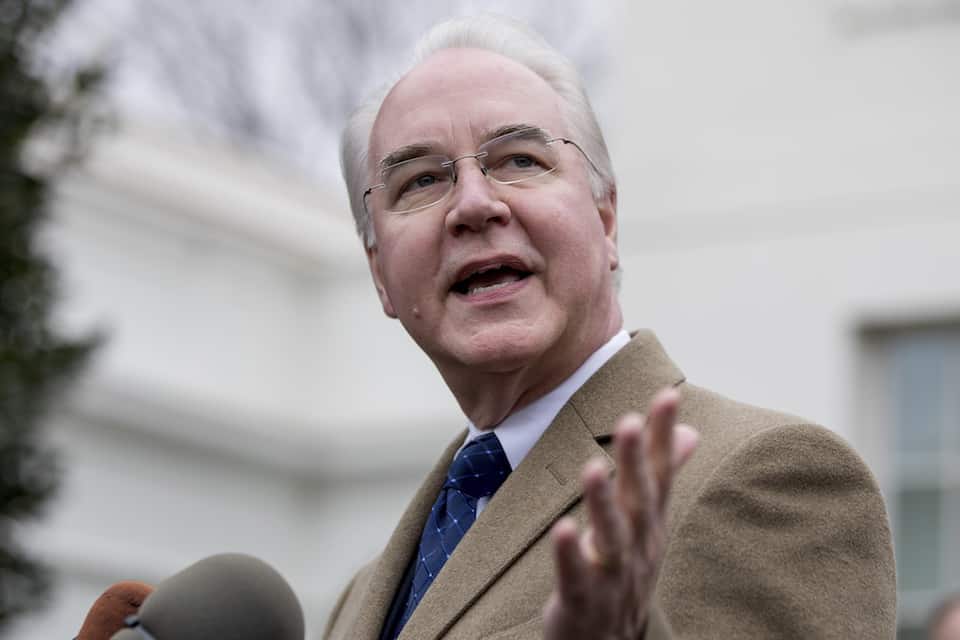 Health and Human Services Secretary Tom Price continued his ice-cold sales job on the Republican health care repeal plan this weekend when he joyfully boasted about the new bill's targeting of "healthy moms and kids" to save money on Medicaid.

Republicans seem to be competing to see who can be the most heartless these days, but Health and Human Services Secretary Tom Price is off to an early lead. After refusing to reassure Americans that they would not lose their health care under repeal, and explaining to a cancer patient how kicking him off Medicaid would "strengthen" the program, Price continued the pattern by making the targeting of moms and kids on Medicaid a selling point.

Previously, Price was called out by a town hall participant for complaining about the low number of doctors accepting Medicaid, while insisting on defunding Planned Parenthood, which sees millions of Medicaid patients. Later, CNN host Jake Tapper approached that same issue from a different angle, asking Price how cutting funding for Medicaid would improve participating among doctors who are already fleeing the low reimbursements.

Price responded with a lie wrapped around a truth, and coated in utter nonsense, telling Tapper that the repeal plan could improve Medicaid by not requiring states to "have a plan for those healthy moms and kids that's exactly the same as the seniors and the disabled" — which it already does not do. He further mendaciously asked Tapper to "imagine a system that actually responds to the needs of those healthy moms and kids."

TAPPER: Well, it sounds Utopian, but I have to say, you criticized the Medicaid program because one in three doctors don't take Medicaid patients. And then you talk about — but the reason that they don't, according to experts, is because the reimbursement rate is so low. I don't know how you're going to improve Medicaid if you're taking money away from Medicaid.

The problem is that doctors are not getting paid enough, and you're saying, OK, but we're going to do better with less money. And I don't know an economist who thinks that's going to work.

PRICE: Every time you peel back that onion a little bit, you drill down, and you look at it specifically, you can see where there are wonderful opportunities for improvement in the system.

So, think about, imagine a system, if you will, that actually responds to the needs of those healthy moms and kids in a much more flexible and responsive manner. You can save huge amounts of money, so that you have got greater resources to care for those who are aged and disabled.

The numerous lies in Price's statement begin with the fact that Medicaid's mandatory benefits are, in fact, age and gender specific, and not "exactly the same" for all enrollees, but Price's falsehood is intended to give the rest of his answer the veneer of "common sense."

Another lie is that the "savings" he envisions will be used to provide "greater resources to care for those who are aged and disabled," which, even if true, would be a divisive attempt to pit Americans against each other to sell this plan. And the fact is that the Republican plan Price refers to ratchets down funding for all Medicaid recipients — it just uses "healthy moms and kids" to do it more quickly.

The repeal plan relies on "per capita" spending caps to determine the size of Medicaid block grants, instead of a set federal match based on actual costs. This alone will exert even more pressure on states to cut reimbursements to doctors, causing more of them to stop accepting Medicaid.

But the savings that Price so gleefully points out is gained by targeting those "healthy moms and kids" for their own rspective "per capita caps," enabling the government to cut funding more quickly, and allowing the states less flexibility. Instead of a flatter cut based on all enrollees (also terrible), the Republican plan allows for deeper cuts for each group, which are then carried forward by indexing the caps in a disadvantageous way. This is how Price imagines "huge" savings, on the backs of "moms and kids."

More to the point, none of the "savings" is used to care for the elderly or disabled, and in fact, the funding cuts will put pressure on states to end "optional" benefits, many of which the elderly and disabled depend upon heavily.

A plan that throws 24 million people off of their health care and achieves "savings" on the backs of "moms and kids" is a cruel measure that deserves failure, no matter how Republicans try to dress it up.

GOP senators fail to dig up the dirt on Joe Biden they were hoping...