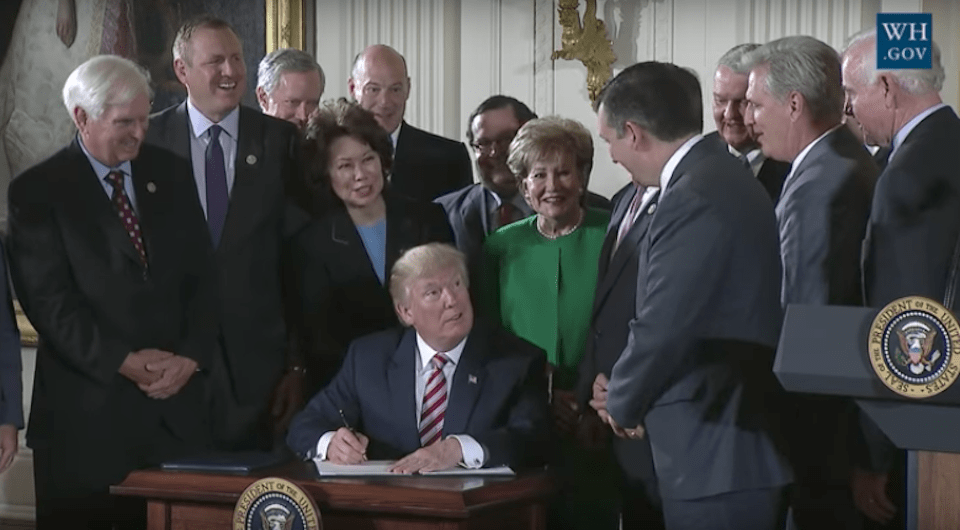 The Trump administration has been caught once again creating made-for-television moments, masquerading as agreements and bill signings. One might even call it "fake news."

Donald Trump held an elaborate signing ceremony in the Oval Office to privatize air traffic control and follow through on his campaign promises to revamp the nation's infrastructure.

Trump didn't sign a bill, though. There is currently no such legislation on these issues. Instead, he signed a memo and a letter to be sent to Congress, promoting his idea to privatize the air traffic control system.

As the New York Times noted, the event "was choreographed like the elaborate ceremonies for enacting major legislation," but the dog and pony show "did not have any binding effect." He even handed out the pens he used to sign the meaningless documents, the way his predecessors have done after signing actual legislation into law.

Trump has struggled mightily to accomplish any of his legislative goals thus far. His White House even issued an absurd list of "historic accomplishments" during his first 100 days in office that included the naming of buildings.

Given the long list of promises Trump made about what he would achieve immediately upon taking office, and how he has failed on every single one of those promises, perhaps it makes sense that his White House is opting to simply pretend he is accomplishing things, with phony signing ceremonies.

This "signing ceremony" echoes another recent manufactured event. During his first presidential trip abroad, Trump signed a joint "strategic vision" document with the government of Saudi Arabia. He said the signing would result in "tremendous investments in the United States ... and jobs, jobs, jobs." The agreement was billed as a $110 billion deal between the two countries.

But Bruce Riedel, a former CIA and national security official now at the Brookings Institution, describes the announcement as "fake news."

"There is no $110 billion deal," according to Riedel. "Instead, there are a bunch of letters of interest or intent, but not contracts. Many are offers that the defense industry thinks the Saudis will be interested in someday."

Riedel further notes, "None of the deals identified so far are new, all began in the Obama administration."

These episodes are part of Trump's pattern of falsehoods about his accomplishments. Before even taking office, he claimed that he had successfully negotiated with the HVAC manufacturing company Carrier in Indiana to save American jobs.

In reality, inducements were offered by the state under then-Gov. Mike Pence's leadership, and the company is still free to move jobs out of the United States.

Trump has attacked news stories exposing his administration's unethical and possibly criminal behavior as "fake news," but as is the case with most of his accusations, he is the true guilty party.