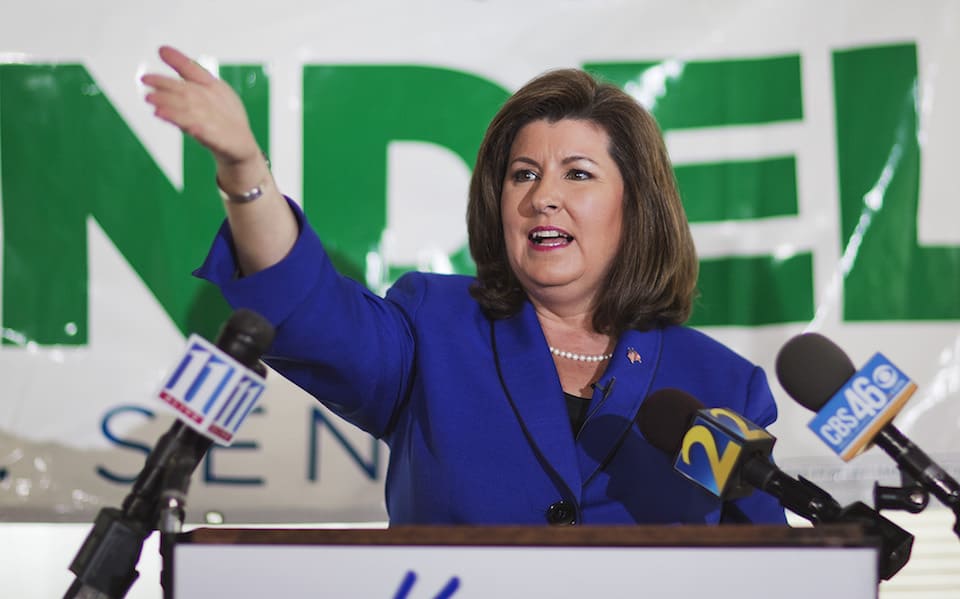 Donald Trump is heading to Georgia to try to help Republicans hold on to the traditionally safe red seat that is now in danger of flipping. And the party's nominee, Karen Handel, could not be a more perfect fit for Trump and his extremist anti-woman agenda.

Republicans long claimed Ossoff would have no chance against a single opponent, rather than the fractured field of 11 candidates he faced in round one. But so far, most polls have shown Ossoff leading Handel, and Ossoff continues to invest millions in his field operation to turn out voters. Ossoff has also gone on the offensive, demanding Handel agree to six debates.

Alarmed by the prospect that Republicans could lose a seat that should not even be competitive, Donald Trump announced that as part of his trip to Atlanta to give a speech at the NRA's annual convention — the first president to do so since Ronald Reagan — he will also host a fundraiser for Handel on Friday.

But Trump is not only getting involved in this special election to protect his increasingly shaky House majority. He and Handel are ideological comrades-in-arms on a number of major issues.

First, Handel shares Trump's signature obsession with undocumented immigrants and the completely debunked notion that they are stealing elections by committing voter fraud.

As Georgia's secretary of state, Handel imposed a background check system on voters, using driver's licenses and Social Security numbers to verify citizenship. This system was blocked by the Department of Justice after it "frequently subject[ed] a disproportionate number of African-American, Asian and/or Hispanic voters to additional, and more importantly, erroneous burdens on the right to register to vote."

Second, Trump and Handel are of one mind on reproductive rights. Handel is infamous for her vicious, overzealous attacks on abortion rights and family planning. In 2012, she was forced to resign from her position as vice president of public policy at Susan G. Komen for the Cure, a foundation committed to fighting breast cancer, after she rammed through a new policy to block Komen's funding for Planned Parenthood. Handel's decision created a firestorm of criticism of the organization and inflicted long-lasting damage to its reputation.

Likewise, Trump is one of the most anti-choice presidents in modern history. He said there should be "some form of punishment" for women who have abortions. Upon taking office, he reinstated the gag rule defunding international nonprofits that discuss abortion — even groups that fight HIV/AIDS, which George W. Bush had exempted when he enacted a similar rule. He also signed a law allowing states to cut Planned Parenthood out of family planning grant programs under Title X.

And of course Trump chose the virulently anti-choice extremist Mike Pence to be his vice president. Pence was the first one to introduce legislation to defund Planned Parenthood when he was in the House. As governor of Indiana, he signed a series of anti-abortion bills so extreme that even some of his fellow Republicans objected, calling them "dangerous."

Handel shares this ideology, and if she were to win the special election, she would be the new Mike Pence of Congress and likely one of the strongest supporters in Congress for the Trump-Pence agenda against women's health care.

Another commonality between Trump and Handel? Their shared contempt for government ethics.

Trump's administration has been marked with rampant corruption. He hired his unqualified son-in-law, who lied on a security clearance form, as a top White House adviser on a range of issues, including national security. Trump unabashedly uses his office to promote his private business and accepts gifts from foreign ambassadors, which many constitutional scholars have said is likely illegal.

Handel's tenure as secretary of state was similarly shady. In 2010, she faced an ethics complaint alleging she illegally spent $13,200 in funds from her secretary of state campaign on her gubernatorial campaign. Given the ongoing and growing investigations in Trump's campaign and his administration, the American people deserve a member of Congress who would be a strong voice for accountability of the president, not someone who has also flaunted ethics rules.

For Trump, this surprisingly competitive race is about more than fending off a humiliating defeat and losing a formerly reliable red seat. It is also a chance to elect a like-minded ally who will rubber-stamp his agenda in Congress. Handel wants voters to believe she will stand up for Georgia's values, but her record shows she will only stand up for Trump's values.