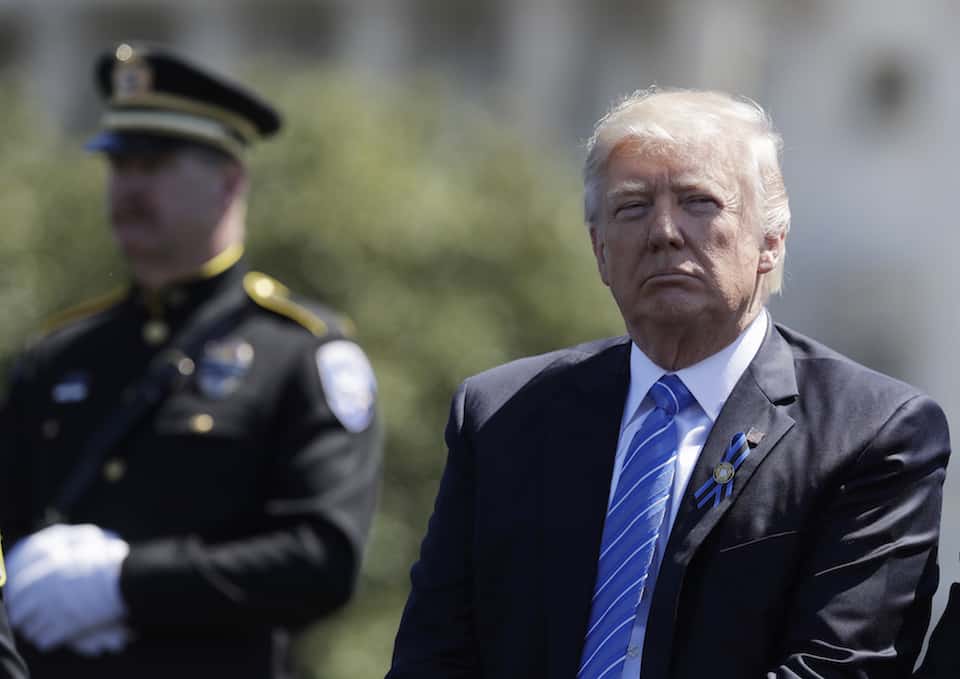 The annual National Peace Officers’ Memorial Service is a solemn occasion that was marked with dignity by President Barack Obama every year of his presidency, but under Donald Trump, it turned into just another political event.

Trump used his speech, before tens of thousands of law enforcement officers and families of the fallen, to reward the Fraternal Order of Police for their support during his political campaign, and pledged his support for them in return:

Trump says he will always support law enforcement "as much as you have always supported me. And you did, bigly." pic.twitter.com/MH8EqaIojc

In doing so, Trump presumed to speak for law enforcement officers who may or may not have supported him, and turned a solemn occasion into a partisan political event.

Trump also, once again, attempted to insert himself into the tragedy of 9/11:

The entire world witnessed the heroism of New York's finest when they gave their lives on 9/11 — I was there — and sacrificed so much in that brutal, horrible aftermath.

What Trump failed to mention is that while brave first responders were sacrificing themselves at Ground Zero, Trump was bragging that he now owned the tallest building in New York.

Trump has claimed to be a huge supporter of law enforcement and has promised to give them every resource they need to do their job. However, during his brief time in office, he has already found himself on the opposite side of law enforcement on more than one issue.

Trump also proposed cutting the budget of the Office of National Drug Control Policy (ONDCP) from $388 million to a mere $24 million, as well as other cuts to anti-drug programs that police warned him not to touch.

Trump's performance at this event was perhaps best summed up, though, by this moment, in which he congratulated himself for not wearing a hat during the service, despite the wind's effect on his famous coif:

Trump's lip service to police officers is belied by his actions, and by the lack of seriousness with which he treated this occasion.