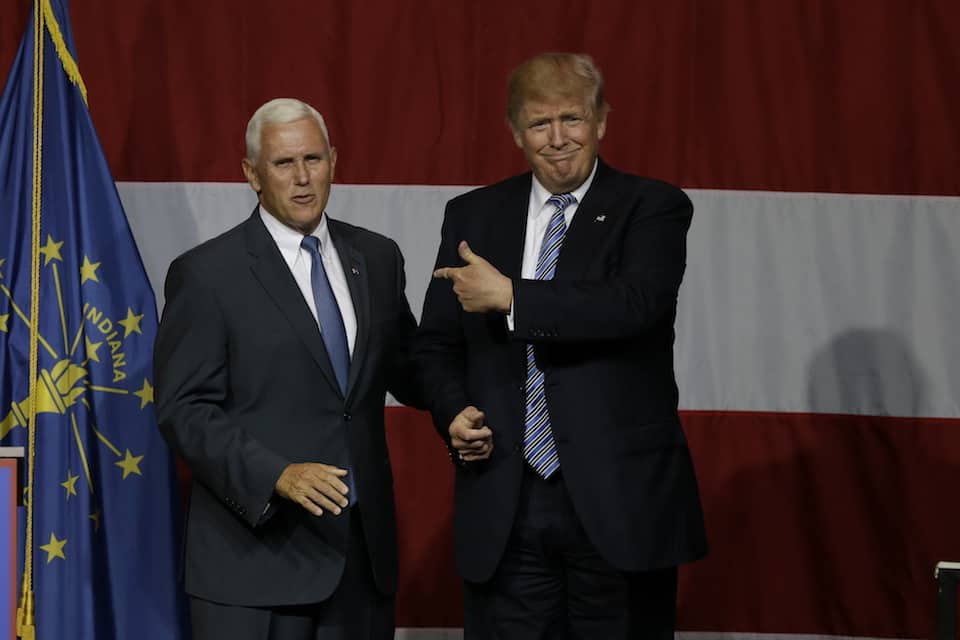 Donald Trump just unraveled his entire team's spin about why he fired FBI Director James Comey, again leaving Mike Pence out in front of another lie and the resulting cover-up of the White House's attempt to interfere in the Russia investigation.

In an apparent attempt to clean up the White House's increasingly messy explanation for the firing of FBI Director James Comey, Donald Trump just made things much worse.

In an interview with NBC's Lester Holt, Trump said that "regardless of recommendation," he was going to fire Comey in the midst of Comey's investigation into the Trump team's ties to Russia. The comment undermines the entirety of the Trump team's effort to justify the firing over the previous 24 hours.

Most notably, it undermines the lies told by his own vice president, Mike Pence, seven times alone during a press conference on Wednesday:

TRUMP: He's a showboat, he's a grandstander, the FBI has been in turmoil, you know that, I know that, everybody knows that. You take a look at the FBI a year ago, it was in virtual turmoil. Less than a year ago, it hasn't recovered from that.

HOLT: Did you ask for a recommendation?

TRUMP: What I did, is I was going to fire Comey. My decision. It was not –

HOLT: You had made the decision before they came into the room?

TRUMP: I was going to fire Comey. There's no good time to do it, by the way. They—

HOLT: Because in your letter you said, "I accepted their recommendation." So you had already made the decision?

TRUMP: Oh, I was going to fire regardless of recommendation.

HOLT: So there really wasn't a –

The White House Trump first insisted that the firing was based on a recommendation from Deputy Attorney General Rod Rosenstein.

But reporting from multiple sources contradicted this claim. They said Trump had decided to fire Comey because of the growing shadow cast across his troubled presidency by the Russia investigation.

Reporting also shows that Pence was in the room when Trump requested a justification, in writing, for firing Comey.

Now, Trump himself has blown a hole in his own cover-up. Undoubtedly driven by ego to tell his side of the story, Trump instead undermined his team's desperate attempts to spin the seemingly nefarious firing in one fell swoop.

According to the president, he was planning to fire Comey, "regardless of recommendation." And that means every other excuse offered to date by his vice president and the rest of his team — including the letter to Comey that Trump released to the press claiming otherwise – was a complete fabrication.

The collapse of this story, resulting in egg on Pence's face, is the latest chapter in the serial humiliation that Trump has piled on Pence. From wanting to back out on his selection to getting him to lie to the public about the vetting of Mike Flynn and the cover-up of his FBI purge, Trump has taken Pence along for the ride with him into the muck.

Now they are both covered in the stench of corruption and failure.