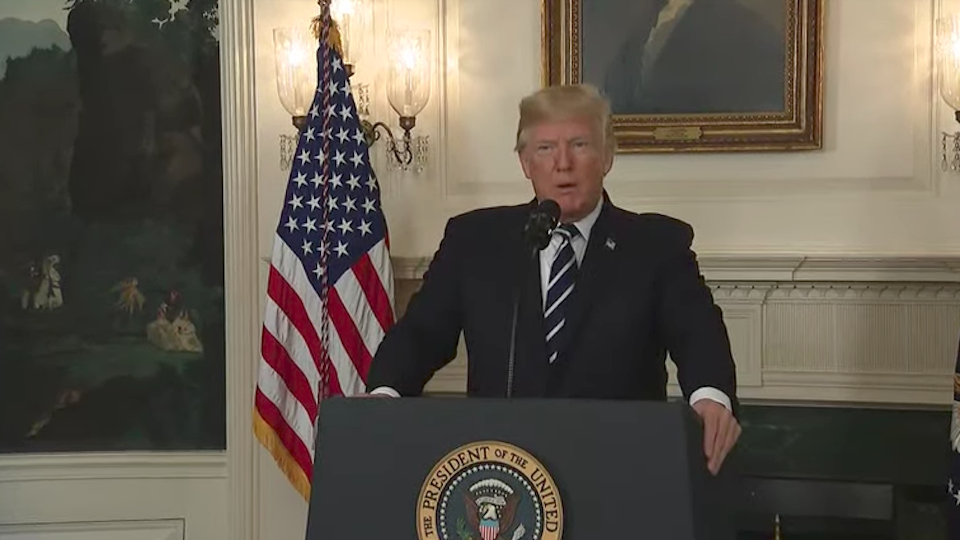 Donald Trump completely ignored the topic of gun violence in his statement about the mass shooting in Las Vegas that left 50 dead and another 400 injured.

Donald Trump's statement on the mass shooting in Las Vegas contained no references to guns or gun violence. The shooting at the Harvest Music Festival has taken the lives of at least 50 people and injured more than 400, and is the worst such attack in modern American history.

In his address to the nation, Trump referred to the "terrible, terrible attack" and said, "We pray for the day when evil is vanished and the innocent are safe from hatred and from fear." In his first statement, Trump strangely offered "warmest condolences" to the victims.

Yet unlike past tragedies, Trump did not use his bully pulpit to call for action or measures to prevent future mass shootings. When terrorists struck in London, Trump said it was evidence that his ban on Muslims "should be far larger, tougher, and more specific."

He also did not describe the horrific mass murder as "terrorism," even though he is typically quick to describe other similar events that way and, before taking office, repeatedly attacked President Barack Obama for not using the word.

But faced with an armed gunman who stockpiled weapons in his Las Vegas hotel room and rained death on innocent Americans, Trump did not speak about the guns or any measure to prevent mass shootings.

The behavior is the sort of rhetoric to be expected from a politician who has had the backing of the NRA. The organization endorsed Trump in May of 2016, demanding that the remainder of the Republican presidential field be cleared for him. He returned to speak to NRA members almost a year later, promoting the idea that a woman cannot be president.

Trump's rhetoric stands in stark contrast to Obama, who immediately after the Newtown massacre, pointed out that it was just the latest in a long cycle of mass gun violence, and that actions needed to be taken to prevent it in the future:

As a country, we have been through this too many times.  Whether it’s an elementary school in Newtown, or a shopping mall in Oregon, or a temple in Wisconsin, or a movie theater in Aurora, or a street corner in Chicago -- these neighborhoods are our neighborhoods, and these children are our children.  And we're going to have to come together and take meaningful action to prevent more tragedies like this, regardless of the politics.

Despite Obama's pleas after Newtown — and again, after each of the many mass shootings that have occurred since then — congressional Republicans have refused to act. They have offered "thoughts and prayers," while refusing to vote for legislation to curb such violence, including bills that have the overwhelming support of nearly all Americans, including gun owners.

On Monday, Connecticut Sens. Richard Blumenthal and Chris Murphy again called on their colleagues to act. Trump, however, made no such requests for immediate action. Thus far, neither have any of the Republicans in Congress, who like Trump have received the backing of the NRA.

Their silence has been purchased.