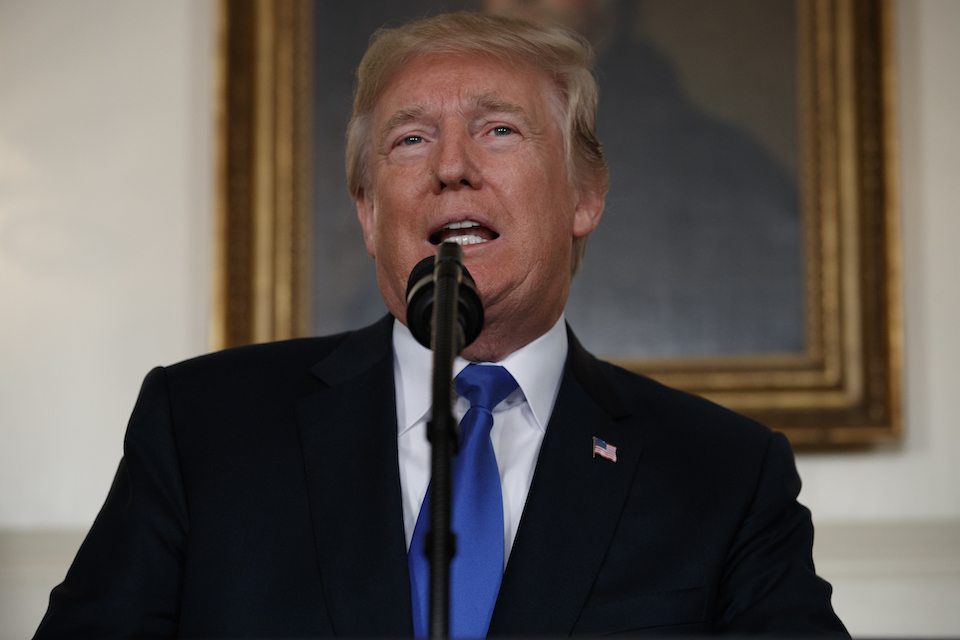 Trump announced his new "strategy" in dealing with Iran — and was immediately called out by reporters for lying to provoke global instability.

Donald Trump announced he is decertifying the 2015 deal to keep Iran's nuclear program in check by claiming the country is not in compliance. But reporters immediately pointed out that this was a lie.

The truth is that Trump's own team has repeatedly admitted that Iran has been in compliance with the arrangement put in place by President Barack Obama and his team.

Trump is trying to justify his over-the-top rhetoric about the deal that he employed on the campaign trail, and in the process rattling tensions and making the world less safe.

Trump began his speech by once again exhibiting his envy of Obama, baselessly claiming that the deal was made with Iran "just before what would have been the total collapse of the Iranian regime." Experts have responded to this claim from Trump before and said there is "no evidence" of this assertion.

"The president alleged here something that has been contradicted by every agency head who's responsible for reviewing this deal. All of the senior advisers."

Despite Trump's claim that Iran is in violation, Sciutto added, "His senior advisers have said publicly and repeatedly it is not."

Trump said that the United States would not certify Iran for compliance with the agreement. But just a few days ago, Secretary of State Rex Tillerson — who reportedly called Trump a "moron"— admitted that Iran has been in compliance. And the Trump administration has twice before certified that.

CNN aired a montage of Trump officials conceding the compliance.

Gen. Joseph Dunford, chairman of the Joint Chiefs of Staff: "Iran is not in material breach of the agreement, and I do believe the agreement to date has delayed the development of nuclear capability by Iran."

Secretary of State Rex Tillerson: "My view on the nuclear deal is they are in technical compliance of the nuclear arrangement."

Secretary of Defense James Mattis, asked at a recent Senate hearing whether he believes the United States should remain in the agreement, answered, "Yes, Senator, I do."

Trump has been complaining about the Iran deal for years, but thus far, it is achieving the goals that the Obama administration set. Keeping Iran from becoming a nuclear aggressor keeps the world safe from a major global threat.

Instead of acknowledging facts, Trump is flat-out lying to justify his campaign rhetoric. He has been noticeably angry at his legislative impotence, so to make up for it he is bashing Obama and unnecessarily provoking Iran.

He is undermine the repeated assessments of his own team, and putting American lives on the line to avoid another embarrassment.