Home National Trump in 1992: 'I would have wiped the floor with the guys...
Support progressive journalism.
Donate today 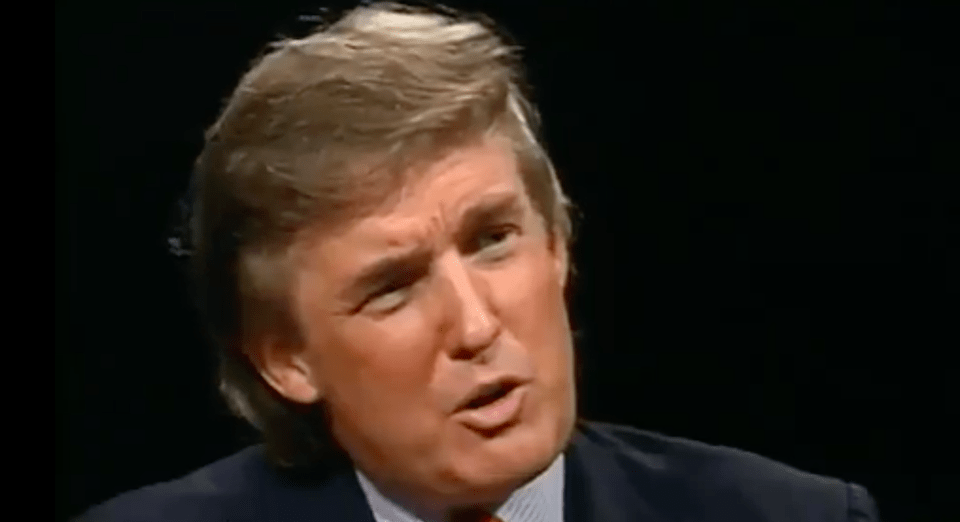 Recently surfaced video proves that Donald Trump has been fixated on loyalty for decades.

A recently surfaced recording of Donald Trump's appearance on the Charlie Rose show in 1992 shows that Trump has been obsessed with loyalty and revenge for a very long time.

Trump explicitly divides people into two groups: Those who are loyal to him and those who are disloyal. And he chillingly declares that he "loves getting even" with those he perceives as having been disloyal — people who "didn't come to [his] aid" or "do small things that would have helped."

The 1992 version of Trump is strikingly similar in tone and personality to the present-day iteration.

Trump in 1992 on how he relishes getting even w/people who are disloyal, who don't come to his aid, via @riotwomennn pic.twitter.com/9spG3cwqnP

ROSE: Slow up. You love getting even?

TRUMP: Oh absolutely. You don't believe in the eye for an eye? You do. I know you well enough I think you do. But any way, but...

ROSE: [chuckles] But tell me. You're going to get even with some people? Because they...

ROSE: But how do you define disloyalty?

TRUMP: They didn't come to my aid.

ROSE: But what did they do? Did they turn their back on you?

This video resurfaced at an interesting time, as former FBI Director James Comey's testimony under oath about the multiple meetings he had with the president has brought Trump's fixation on loyalty to the forefront.

Comey noted in a contemporaneous memo written after one such meeting that Trump told him, “I need loyalty. I expect loyalty.”

Trump's personal attorney issued a statement denying Trump ever asked Comey for loyalty "in form or substance," and implied that it would have been fine even if he had done so because "the Office of the President is entitled to expect loyalty from those who are serving in an administration."

Giving even more credence to Comey's testimony, during a meeting with his newly finished cabinet, the members took turns, at Trump's request and on camera, offering praise and declarations of honor for the jobs Trump has given them.

Trump went around table listening to his Cabinet praise him

Reince: “We thank you for the opportunity & the blessing…to serve your agenda” pic.twitter.com/3MPQq4CIiq

PRIEBUS: On behalf of the entire senior staff around you, Mr. President, we thank you for the opportunity and the blessing that you've given us to serve your agenda and the American people. And we're continuing to work every day to accomplish those goals.

POMPEO: Mr. President, it's an honor to serve as your CIA director. It's an incredible privilege to lead the men and women who are providing intelligence so that we can do the national security mission, and, in the finest tradition of the CIA, I'm not going to say a damn thing in front of the media.

[laughter from around the table]

Whether or not Trump indeed asked Comey for loyalty is a serious matter, as it goes directly to the question of whether Trump is guilty of obstruction of justice.

In an effort to try to protect Trump by discrediting Comey, the White House and the GOP are engaging in a full-out smear campaign, and claiming Comey committed perjury when he said Trump asked him for loyalty is part of that larger effort.

Trump's actions today and his words 25 years ago demonstrate that the scenario Comey so carefully recorded earlier this year is plausible and credible. Trump places an extremely high value on loyalty — above that even of the rule of law.