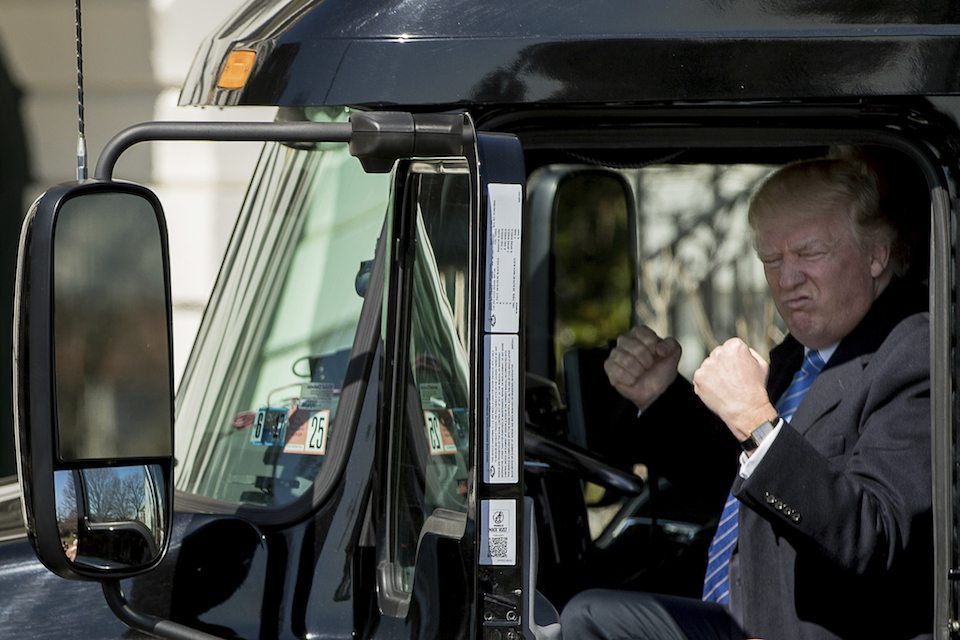 Donald Trump has invented a new imaginary friend, a trucker who is upset with the condition of American roads. The "trucker" is the latest in a cast of characters Trump has cited to advocate for his positions, beliefs, and conspiracies.

Donald Trump added to his menagerie of invented friends, associates, and identities in an interview with Christian right broadcaster Pat Robertson. He used the new character to attack the quality of American roads while touting his purported infrastructure plan.

Trump broke from his light schedule of Fox News watching to speak to the controversial host and one-time Republican presidential candidate with a history of warning his audience of the demonic influence of paintings, yoga, the "Twilight" film franchise, and teenage sleepovers.

Discussing infrastructure spending, Trump claimed that he has "a friend who is a trucker" who "buys the best trucks" and is upset about the potholes lining the roadways between the coasts. The "friend" supposedly complained to Trump, "I've got to fix my equipment all the time."

TRUMP: I want to rebuild our bridges, and our roads. I have a friend who's a trucker. And he loves — he's very proud of his equipment he buys very big — and he buys the best trucks. He's very proud of it. He said in the past — you know when we went from Los Angeles to New York — it was fine. Now by the time he gets to New York, with all the problems on the roads, and potholes — he said, "I gotta fix my equipment all the time." He wants to go to a different level of truck, meaning downward. We have to fix our roads and we have to fix our infrastructure, so infrastructure's very important.

The trucker friend is most likely made up. Trump has constantly cited friends of his who are always confirming his own assertions about the world.

The Associated Press recently investigated "Jim," a "friend" Trump claimed told him to avoid Paris due to supposedly rampant terrorism in the European capital. Trump claimed that "Jim" told him, "I don’t go there anymore. Paris is no longer Paris."

On the eve of Trump's visit to Paris despite this dire warning from "Jim," the AP reported, "Trump has never given his last name. The White House has not responded to a request for comment about who Jim is or whether he will be on the trip."

Earlier in the year, The New Yorker tried to find "Jim," but it was also unsuccessful.

"Jim" and the trucker friend appear to be as evasive as the "extremely credible source" Trump once cited to validate his conspiracy theory about President Barack Obama's birth certificate. Trump also infamously pretended to be "John Barron" and "John Miller," as he spoke to news outlets to promote himself. Perhaps either Miller or Barron are also truckers.

And so far, the infrastructure "plan" from Trump is as unreal as the cast of characters that exist within his own mind. During his so-called "infrastructure week," he even held an elaborately choreographed "signing ceremony" — not to commemorate signing any legislation or even executive order, but rather, simply a letter to Congress about infrastructure.

He has failed to pass any significant legislation within the first seven months of his presidency, and has been unable to convince any Democrats to sign on to the destructive and unpopular health care bill he and his congressional allies Paul Ryan and Mitch McConnell are trying to pass.

Perhaps Trump should invent a senator or two to rescue his failing presidency.