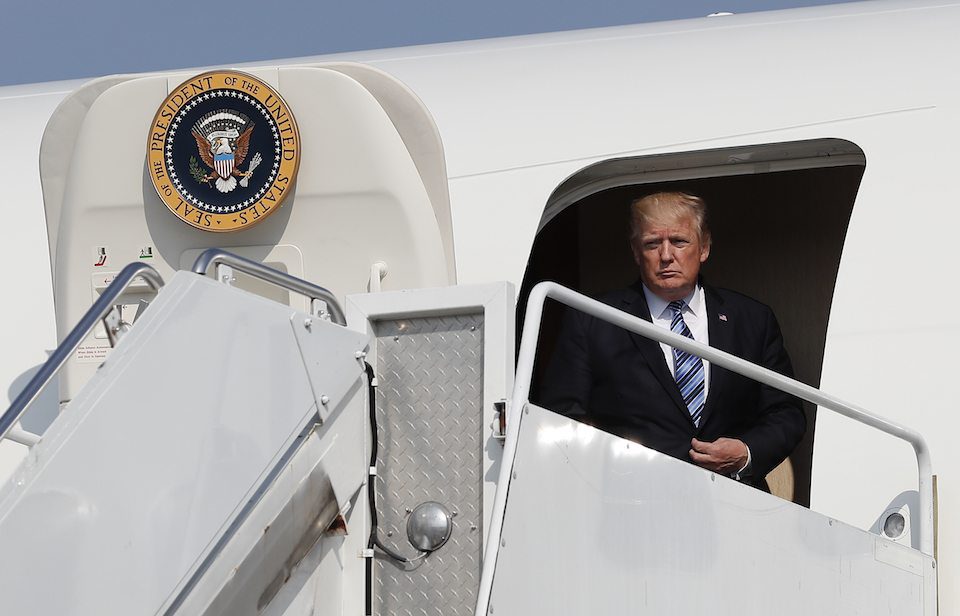 Donald Trump continues to deny evidence that Russia interfered in the presidential election, calling his communications director from Air Force One to urge him to promote the administration's false narrative.

Donald Trump continues to promote disinformation and lies about Russia's election interference — even from 36,000 feet in the air.

According to incoming White House communications director Anthony Scaramucci, Trump called him from Air Force One to encourage him to deflect scrutiny from Russia's meddling in the 2016 presidential election.

At first, Scaramucci tried to coyly avoid naming Trump, telling CNN's Jake Tapper that "somebody" told him, "If the Russians actually hack this situation and spill out those emails, you would have never seen it." He claimed this was was evidence of Russia's confidence in their "deception skills and hacking."

But after Tapper objected to such a claim coming from an anonymous person, Scaramucci admitted otherwise.

"How about: It was the president, Jake."

SCARAMUCCI: Somebody, said to me yesterday — I won't tell you who — that if the Russians actually hacked this situation and spilled out those emails, you would have never seen it, you would have never had any evidence of them. Meaning that they're super-confident in their deception skills and hacking. My point is, all of the information isn't on the table yet. But here's what I know about the president —

TAPPER: Wait a second, Anthony, Anthony — you're making a lot of assertions here. I don't know who this anonymous person is that said 'If the Russians had actually done it, we wouldn't have been able to detect it,' but it is the unanimous —

SCARAMUCCI: How about it was the president, Jake?

TAPPER: Okay. It's the consensus of the intelligence community —

SCARAMUCCI: I talked to him yesterday, he called me from Air Force One, and he basically said to me, "Hey, you know, this is – maybe they did it maybe they didn't do it, and I'm going to maintain for you –" hold on a second.

TAPPER: But this is exactly the issue here. We have experts — the U.S. intelligence agencies, unanimous, both Obama appointees and Trump appointees, the Director of National Intelligence, the head of the National Security Agency, the head of the FBI — I mean, all of these intelligence experts saying Russia hacked the election, they tried to interfere in the election. No votes were changed, but there was this disinformation and misinformation campaign. President Trump is contradicting it, and you're siding with President Trump.

SCARAMUCCI: I didn't say that I was siding with President Trump. He hasn't made the decision yet to sign that bill, one way or the other. And so, when he makes that decision, I will 100 percent side with him, because I'm his communications director, and I'm his advocate on a show like this.

Once again, Trump is siding with Russia and its leadership, rather than accepting the findings from multiple intelligence agencies in his own country, which say that the hacking and leaking of Democratic Party emails was a Russian operation.

During the campaign, Trump claimed that the hacking could have been the work of China or "somebody sitting on their bed that weighs 400 pounds." And even, as Tapper points out, as other members of his own administration have said it was clearly Russia, he remains steadfast in his message.

At the highest levels, his campaign had multiple interactions with Russian operatives who were promising them political dirt on Hillary Clinton. As senior Democrats have pointed out, if Trump's campaign offered them this information in exchange for political favors like loosened sanctions, it would constitute a "serious crime."

It could explain why Trump won't admit the truth about Russia — and why he is so determined to keep his preferred version of reality at the forefront that he's making emergency calls from midair to his already flailing new communications chief.