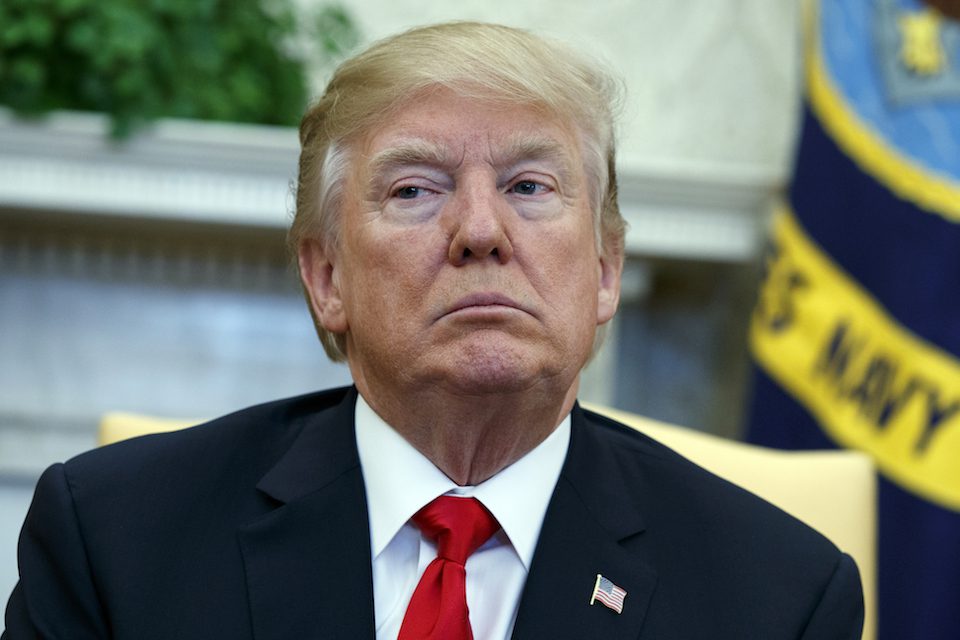 In a letter to special counsel Robert Mueller, Trump's legal team argues that it's impossible for the president to commit obstruction — and that even if he did, he could pardon himself.

In a 20-page confidential letter sent to special counsel Robert Mueller and obtained by The New York Times, Trump’s legal team argues that Trump cannot possibly commit obstruction of justice because he has absolute authority over all federal investigations.

The memo, which seeks to stop Mueller from compelling Trump to answer questions using the power of the subpoena, claims that Trump could stop the investigation at any time or even pardon himself if he wants to.

"By virtue of his position as the chief law enforcement officer, could neither constitutionally nor legally constitute obstruction because that would amount to him obstructing himself, and that he could, if he wished, terminate the inquiry, or even exercise his power to pardon if he so desired," the letter states.

The letter, sent to Mueller in January, presents what The New York Times calls a "brash assertion of presidential power" that is likely to be challenged in court.

In all likelihood, the letter was not meant as a serious legal document. Rather, it appears that Trump's lawyers are trying to blur the line between impeachable offenses and illegal offenses as part of their ongoing public relations campaign.

While it's questionable whether a sitting president can be indicted, there is a clear historical precedent for impeachment based on obstruction of justice.

According to Article II, Section 4 of the Constitution, any civil officer of the United States — including the president — can be removed from their position for "Treason, Bribery, or other high Crimes and Misdemeanors."

And Sessions isn’t the only one.

"More than 40 current GOP members of Congress voted for the impeachment or removal of Clinton from office for obstruction of justice," Politico reported in December.

"They include Senate Majority Leader Mitch McConnell — who mounted his own passionate appeal to remove Clinton from office for obstruction of justice — Senate Judiciary Committee Chairman Chuck Grassley, and Senate Intelligence Committee Chairman Richard Burr, who was a House member at the time."

By virtue of their votes, all of those Republicans are on the record stating that a president can, indeed, obstruct justice and face impeachment for it.

And there's still more historical precedent in this area.

The first article of impeachment against then-President Richard Nixon alleged he had "prevented, obstructed, and impeded the administration of justice."

The letter from Trump's lawyers doesn't exactly help Trump's case. If he has not done anything wrong, there's no reasonable justification for refusing Mueller's request for an interview.

The arguments presented in the letter also suggest that the story Trump and his legal team have been telling the public is very different than what's been going on behind the scenes. While they want to portray Trump as cooperative, the memo shows this was never the case.

The same month that the letter was sent to the special counsel, Trump publicly stated that he was "looking forward" to talking to Mueller and expected to do so within two to three weeks.

"I would love to do it, and I would like to do it as soon as possible," Trump said, referring to an interview with Mueller's team. "I would do it under oath, absolutely."

Obviously, that's not true. If Trump wanted to talk to Mueller, he wouldn't be paying lawyers to come up with 20-page arguments trying to stop Mueller from questioning him.

But unfortunately for Trump, his lawyers' efforts appear to be in vain. Their letter was sent to the special counsel in January, and more than four months later, there's no sign that Mueller is letting up on the obstruction probe — in fact, just the opposite is true.