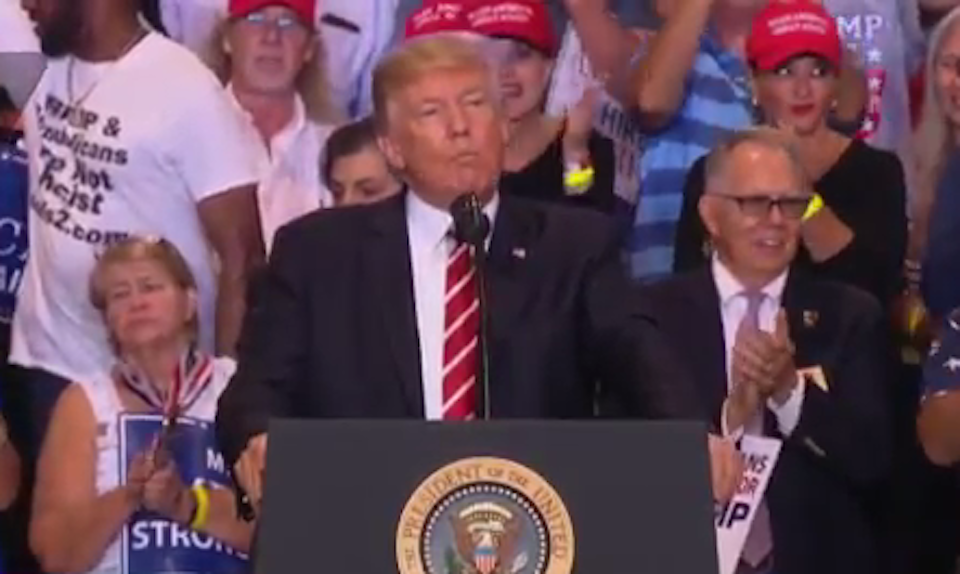 Donald Trump spent 20 minutes defending his atrocious behavior in the wake of the racist riot in Charlottesville, and then revealed — yet again — how much he sympathizes with white supremacists.

Donald Trump used his campaign rally in Phoenix, Arizona — three and a half years away from Election Day — to launch into an extended defense of his pro-white supremacist comments in the days following the Charlottesville, Virginia, terrorist attack.

For over 20 minutes, Trump continued to insist that his response to the attack — where Heather Heyer was killed — was "perfect" and blamed the media for the widespread controversy and condemnation that his failure of leadership has provoked.

Trump went over the statements he had released since the attack, omitting his infamous claim that "many sides" were responsible for the violence in Charlottesville. Instead of taking ownership of his pro-white supremacist remarks, Trump blamed the media. The crowd erupted into a chant of "CNN sucks."

He also blamed the media for the grassroots movement to remove Confederate memorials. Referencing the monuments that were erected to assert white supremacy as the civil rights movement was in full sway, Trump said, "They are trying to take away our history and our heritage."

Attacking the media, Trump shouts the quiet part loud: "They are trying to take away our history and our heritage, you see that." pic.twitter.com/dYQsEwp5Wx

TRUMP:  They are trying to take away our history and our heritage, you see that.

Last week, Trump compared the treasonous, pro-slavery Confederacy to America's Founding Fathers, and his comments show that it was not a one-off remark, but a clear indication of where he stands on the issue.

As part of his tirade, Trump also took a moment to lament CNN's decision to fire pundit Jeffrey Lord, who tweeted "Sieg Heil" to the head of Media Matters for America.

"And they fired Jeffrey Lord. Poor Jeffrey," Trump said to the rally, arguing that the pundit — who was hired at his suggestion — had been too strong an advocate on his behalf for the network to tolerate.

The entire episode was delivered to a room that not even the promise of Trump alongside Mike Pence could fill, while hundreds of anti-racist protesters gathered outside to continue expressing opposition to Trump's presidency.

He has embraced his role, using the White House to defend the men who sought to preserve America's original sin. And he continues to show — despite the mainstream media's insistence — he cannot pivot away from disgraceful behavior.

This is who he is.