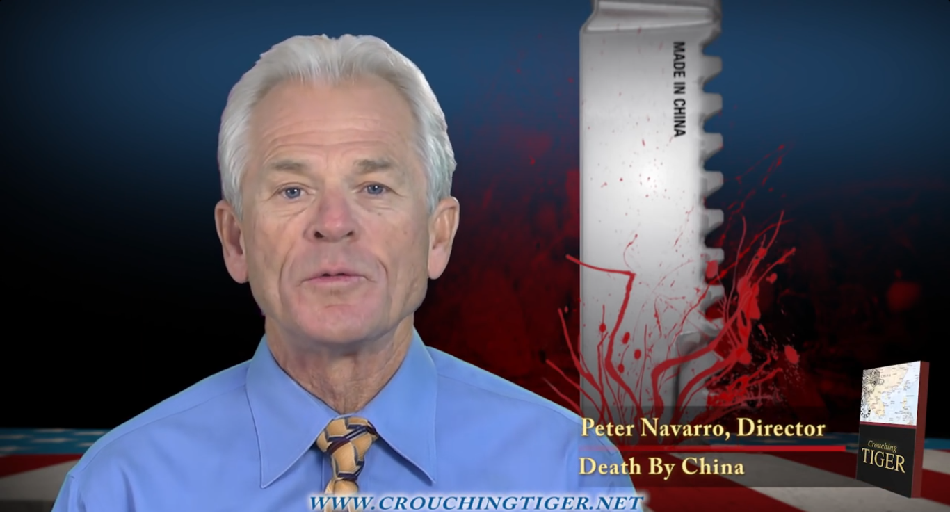 Peter Navarro
Get The American Independent in your inbox

President-elect Donald Trump's formation of a White House National Trade Council is in itself an unprecedented power grab that will undermine several government agencies, including the Office of the U.S. Trade Representative.

Even the Trump transition team says, as reported by Politico, that the council will "usurp responsibilities from both the National Security Council and National Economic Council."

Making matters worse, though, is the man Trump has chosen to lead the venture:

NAVARRO: Hi, I'm Peter Navarro, director of 'Death By China.' What you are about to see addresses one of the most urgent problems facing America: Its increasingly destructive trade relationship with a rapidly-rising China.

That is University of California, Irvine Professor Peter Navarro introducing his anti-China documentary, "Death by China," in front of a graphic that features a huge knife — pointedly labeled "Made in China" — ripping through the blood and guts of America.

Trump has already managed to dangerously unsettle U.S. relations with China, and this move will continue that pattern.

Navarro has endorsed Trump's campaign promise of 45 percent tariffs on goods from China, which could cost American jobs if China retaliates against American exports. Such a trade war would do little to stem manufacturing job losses, which have largely occurred due to automation, a phenomenon that Trump's labor secretary-designate, Andrew Puzder, supports.

The other part of Trump's jobs strategy, as demonstrated thus far, is to empty taxpayers' pockets in order to beg companies to only ship away 62 percent of their jobs to foreign countries.

Icahn will help Trump select powerful regulatory figures like the chair of the Securities and Exchange Commission, and thus the damage that Icahn could do to regulations within his own industry is staggering.

This is a quid-pro-quo 25 years in the making. In the early 1990s, Icahn came to Trump’s rescue as his casino business was failing. Today, Trump made Icahn the regulatory czar of his administration.

Icahn has billions in stock holdings, and according to the Wall Street Journal, he is already ‘playing a central role’ in selecting the next Chair of the Securities and Exchange Commission. Now, he will also be in charge of overseeing regulatory overhauls while simultaneously controlling or owning stock in companies that could benefit from the changes he makes. It looks like Trump isn’t the only billionaire set to profit off of the presidency.

The corrupt nature of this arrangement cannot be understated. Voters who wanted Trump to drain the swamp just got another face full of mud.

Icahn's position as an unpaid "outside adviser" will give him the power to rewrite regulations, but shield him from government conflict-of-interest laws.

To the extent that Trump appealed to voters at all on policy, trade was a major pillar of that support. His actions thus far, though, indicate policy inclinations that will harm American workers, while also creating geopolitical chaos. This power grab gives Trump an even sharper tool with which to do that.