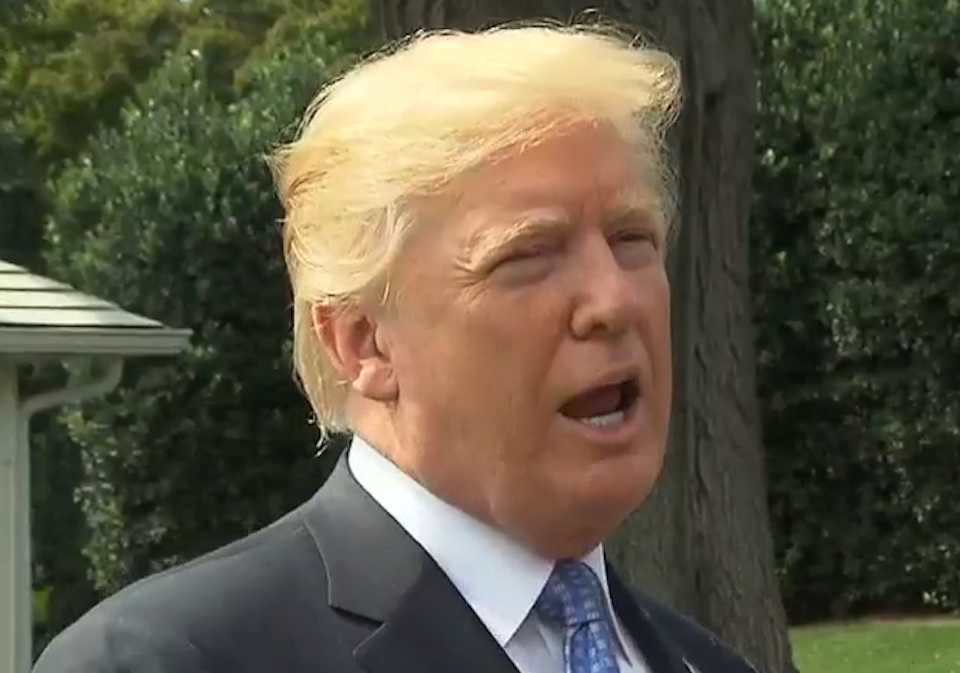 Trump said this week that he has "plenty of time" to attack protesting NFL players, but he brushed off reporters asking him about Alabama’s GOP nominee for Senate.

The GOP’s nomination of Roy Moore, the disgraced former chief justice of the Alabama Supreme Court, to fill Jeff Sessions’s vacant Senate seat has sent shockwaves through the Republican political sphere. Though not hugely surprising after the past few weeks of polls, Moore's win fuels speculation that Democratic candidate Doug Jones could pull off an upset. And everyone seems to have an opinion.

Everyone except for Donald Trump.

When CNN reporters asked Trump to comment on Moore’s history of hateful and racist statements, Trump waved the question away, saying, “We’ll talk to you about that at a different time.”

Trump will not comment on Moore's controversial past comments: "We'll talk to you about that at a different time" https://t.co/jZzSzX6js9

Take a moment to consider how amazing it is for Trump not to have an opinion on something.

He has opinions on everything from Meryl Streep’s acting talent to the posture of NFL athletes to the numeric value of various women’s physical attractiveness. He routinely tweets out thoughts that no one asked for at 6 in the morning.

Just this week, he bragged about how much “free time” he has, at least to attack black athletes protesting policy brutality. But he has no time to form an opinion on Roy Moore’s baggage?

Part of Trump’s silence may be rooted in the fact that, although he now endorses Moore, he was not his first choice. Trump originally backed Luther Strange, only to have his own former white nationalist advisers Steve Bannon and Sebastian Gorka defy him and fight for Moore.

Trump was enraged by the experience of backing the wrong horse and deleted some of his tweets endorsing Strange in an effort to rewrite history.

Another issue might be that even for Trump — who somehow managed to find some “very fine people” in a crowd of Nazis — Moore cannot be an easy person to defend.

Moore believes the Constitution is superseded by God’s law. He believes 9/11 was divine punishment for America’s heathen ways. He was fired twice as from the Alabama Supreme Court for illegally establishing religion and defying the Constitution. He granted child custody to an abusive father over a lesbian. He argued that Muslims are ineligible for public office. He gave a speech to a white supremacist group. He has said the root of racial tension in America is that “reds and yellows” cannot stop fighting.

When even Trump would like to take a pass on the state of GOP politics, you know that our country is headed for serious trouble.