Home National Trump not sure where anti-Semitism is coming from — as WH fails...
Support progressive journalism.
Donate today 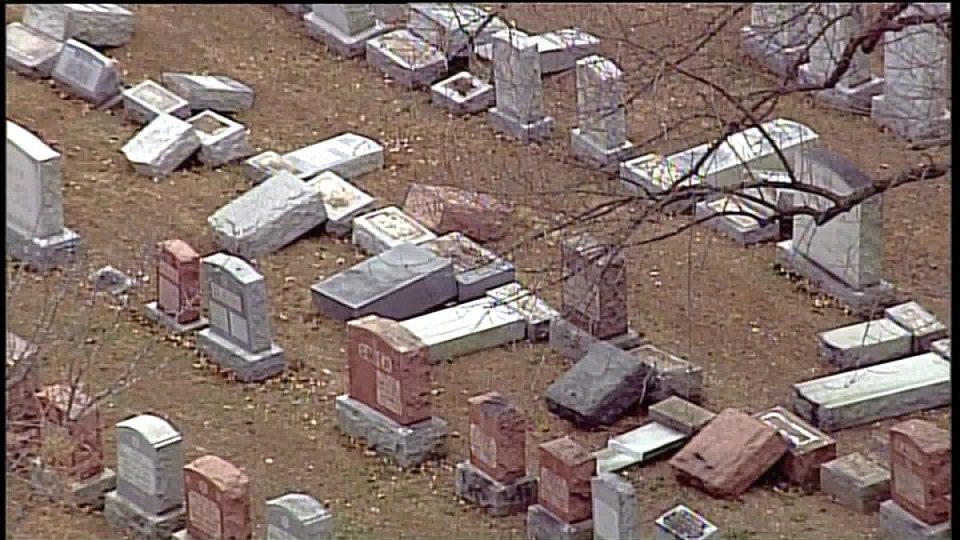 Joe Lamie/Twitter
Get The American Independent in your inbox

The anti-Semitism Donald Trump's presidential campaign sparked has worsened since his election. In response to increased threats, Trump said (when pressed) that "you don't know where it's coming from" but that he denounces anti-Semitism "whenever I get a chance." This is demonstrably false. And responses to anti-Semitism from his White House don't mention Jewish people.

While the resurgence of anti-Semitism during Donald Trump's presidential campaign may have come as an appalling surprise to some, to many Jews in this country, it was a distressing but familiar public emerging of the hatred we have always known lurked beneath the surface.

Since their candidate captured the White House — though not by a majority of the voters — many of those who engaged in this bigotry have become further emboldened by Trump's political triumph.

In the most recent episode, vandals attacked a Jewish cemetery in St. Louis, MO, knocking over the headstones of at least 170 graves.

A groundskeeper arrived Sunday morning to find gravestones overturned across a wide section of the cemetery, the oldest section as it happens, bearing the remains of Jews who died between the late 1800s and the mid-20th century, Anita Feigenbaum, director of the Chesed Shel Emeth Society, told The Washington Post in a phone interview.

She called it a "horrific act of cowardice," beyond anything the cemetery had experienced in the past.

The cemetery was founded by the Russian Jewish community in St. Louis "to aid all Jews who needed burial whether they had the money or not. To this day that’s what we do. We are not for profit. We help in this horrible time in a person’s life."

In response to the vandalism at the St. Louis cemetery and violent threats against Jewish Community Centers, White House Press Secretary Sean Spicer issued a formulaic response that could have been written at any time, about any incident:

BREAKING: @PressSec responds to my request for comment about wave of threats to Jewish community centers. @NBCNews pic.twitter.com/2Yq9atnAmt

It was not until the following morning that anti-Semitism was actually mentioned, and then only in response to a direct question from MSNBC's Craig Melvin  about the lack of clear denunciation of the attacks:

MELVIN: Will you denounce anti-Semitism once and for all just to clear up the confusion?

TRUMP: I do all the time. I think it's terrible or horrible, whether it's anti-Semitism or racism or anything you can think about having to do with the divide. Anti-Semitism is likewise just terrible. You don't know where it's coming from but I certainly hope they catch the people. I think you maybe have had it for longer than people think and maybe it gets brought up a little bit more but I will tell you that anti-semitism is horrible and it's going to stop and it has to stop.

MELVIN: So you're denouncing it once and for all?

TRUMP: Oh, of course. Wherever I get a chance I do it.

Trump's claim that he denounces anti-Semitism "all the time" and "whenever I get a chance" is false. When a Jewish reporter, Jake Turx, recently challenged him to substantively address the uptick in anti-Semitism, Trump responded not by denouncing anti-Semitism, but by whining about the question, calling it "unfair," and telling Turx to "sit down." Trump then had the audacity to insist that he is "the least anti-Semitic person that you have ever seen in your entire life."

These responses should come as no surprise from an administration that managed to put out a statement marking Holocaust Remembrance Day which omitted any reference to the 6 million Jews who were murdered by the Nazis, erasing the fact that the overarching motivation behind the Holocaust — though other groups were victimized in great numbers, as well — was anti-Semitism.

Deborah Lipstadt, writing for The Atlantic, opened her article with the painfully true observation that "Holocaust denial is alive and well in the highest offices of the United States."

In a clumsy defense Hope Hicks, the White House director of strategic communications, insisted that, the White House, by not referring to Jews, was acting in an "inclusive" manner. It deserved praise not condemnation. Hicks pointed those who inquired to an article which bemoaned the fact that, too often the "other" victims of the Holocaust were forgotten. Underlying this claim is the contention that the Jews are "stealing" the Holocaust for themselves. It is a calumny founded in anti-Semitism.

There were indeed millions of innocent people whom the Nazis killed in many horrific ways, some in the course of the war and some because the Germans perceived them—however deluded their perception—to pose a threat to their rule. They suffered terribly. But that was not the Holocaust.

The Holocaust was something entirely different. It was an organized program with the goal of wiping out a specific people. Jews did not have to do anything to be perceived as worthy of being murdered. Old people who had to be wheeled to the deportation trains and babies who had to be carried were all to be killed. The point was not, as in occupied countries, to get rid of people because they might mount a resistance to Nazism, but to get rid of Jews because they were Jews.

But the Trump administration chose to gloss over this reality, and in doing so, found their own banal way of reopening wounds already smarting anew in the face of fresh accounts, seemingly week by week, about how many people in this country still harbor a desire "to get rid of Jews because they [are] Jews."

More than once throughout the presidential campaign, and now under this new administration, I have found myself feeling a bit of relief that I do not have an identifiably "Jewish" last name, and thus — though I never try to hide my religious identity — have perhaps been shielded from the anti-Semitic attacks other writers and journalists have experienced.

And that fact, that feeling of relief, is profoundly saddening to me.

That sadness might be ameliorated if we had a president who truly cared about all of his constituents, and made it abundantly clear that his administration would be on the side of the marginalized, of those who are the targets of hatred and violence, rather than telling us to "sit down," rather than praising those who would harm us.

We are still waiting to hear what administration will do to address ongoing threats to Jewish communities #answerthequestion https://t.co/eBSPz6krb4

Instead, when we are targeted, he offers a denouncement that is a lie, and tepid White House statements that do nothing to address the growing danger he helped stoke.