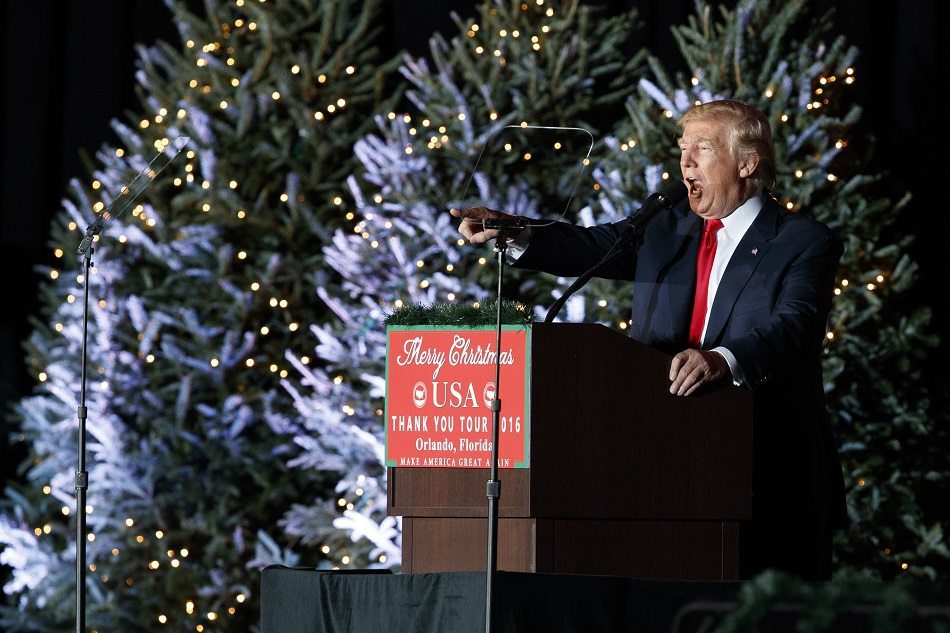 President-elect Donald Trump spoke to his supporters about, in his words, their "vicious, violent" behavior, and how "nasty and mean" some of them were during the election. But he was not admonishing them — he was complimenting them, and implying that their behavior helped him win the presidency. It was a chilling assessment, and offers an ominous glimpse of the future.

At a stop on his "Thank You" tour in Orlando, Florida, on Friday, President-elect Donald Trump brought up the subject of dangerous, hateful behavior among his supporters. They had been, he stated, "vicious" and "violent," they were "nasty and mean," and they screamed support for a border wall and for imprisoning Hillary Clinton.

But Trump was not lecturing his fans, nor condemning this atrocious behavior. He was clearly and openly complimenting it, and essentially chalking up his Electoral College victory to its existence.

It was chilling to hear:

President-elect Donald Trump calls his supporters "vicious and violent" at a rally in Orlando Florida. pic.twitter.com/3Vbf9wC5UI

TRUMP: You people were vicious, violent, screaming: 'Where's the wall? We want the wall!" Screaming: 'Prison, prison, lock her up!" I mean, you are going crazy. I mean, you were nasty and mean and vicious and you wanted to win, right?

To gleefully imply that his election owes at least some credit to the frightening and despicable actions of some of his supporters is repugnant, and is precisely the opposite of "presidential" behavior. But considering Trump could barely bring himself to utter more than two words — "Stop it." — in reproach when directly challenged to address the violence and bigotry among his crowds, it is, unfortunately, in keeping with who he is, as a future president and as a human being.

Moreover, his invocation of violent behavior not to condemn it but to praise its efficacy only invites more of the same in future. There is no value in acknowledging that his supporters are "mellow" as they "bask in the glory of victory," except inasmuch as it serves to congratulate them on using any means necessary to achieve what they want.

Thus there is little to stop any of them from resorting to nastiness and violence in the future, when there is a new goal in mind. If there is a bill they want passed or killed, if there is a nominee for an office or judgeship they want confirmed or rejected, if there is a resistance movement they want to silence and conquer, they have been implicitly told by their new President-elect that the means to achieve those ends is to ramp up the violence again.

"Because we won, right?"

Trump's specific comments about how, now that they have secured his victory, his supporters have become "laid back," "cool," and "mellow" also serve an ominous purpose: These remarks are aimed not at his crowds — many of whom have certainly not become laid back or mellow since the election — but at the rest of the country and especially at the national media, in a disquieting attempt to gaslight anyone who tries to point out the dangers of an administration so beholden to and so enamored by angry and abusive people.

Trump insisting that his fans are all okay now, that they are calm and cool, is his way of asking the rest of us who we are going to believe — him or our lying eyes?

It is imperative that no one, particularly in the national news media, allows themselves to be snowed by this doublespeak. Trump knows what he is doing, and the rest of us must be equally aware in order to fight his obfuscation with reality.